Eagles of Death Metal Open Up About Bataclan Slaughter

Eagles of Death Metal Open Up About Bataclan Slaughter

“Our friends went there to see rock n’ roll and died. I want to go back there and live.” 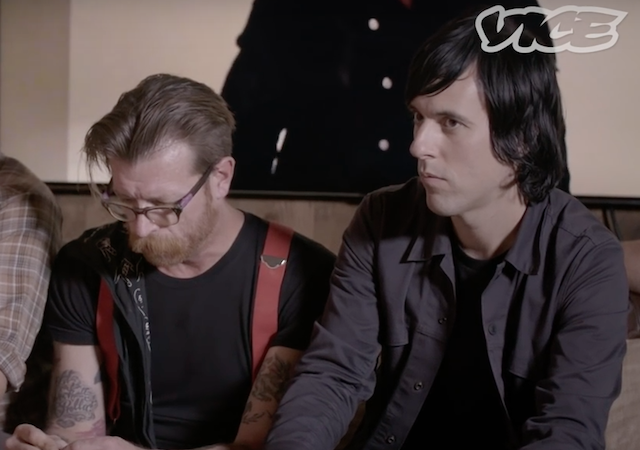 Eighty-nine people died when terrorists opened fire on a packed house at Paris’ Bataclan concert hall earlier this month. The crowd had come to see the Eagles of Death Metal; an hour into the show, the terrorists began shooting into the crowd. That night, 130 people died all across Paris, and over 350 people were left injured.

Covering those events was a very raw experience—and I was 4000 miles away, comparatively safe in my home in Washington. The stories that flowed from the streets of Paris that night—particularly those from survivors of the hostage situation and eventual massacre at the Bataclan—defined what it truly means to commit an act of terror, as opposed to an act of war or a “senseless act of violence.”

This week, the Eagles of Death Metal band members opened up to Vice News and described what it was like inside the Bataclan when the terrorists started shooting.

“At first I thought it was the PA [system] cracking up, and then I realized real quick that it wasn’t,” guitarist Eden Galindo said, describing the first wave of gunfire that tore through the Bataclan concert hall an hour into the band’s sold-out show.

During the interview, Matt McJunkins, the band’s bass player, spoke about being trapped in a room with fans attempting to avoid gunfire.

“Everybody started going up into this room … to just escape the gunfire, naturally, instinctively,” he said. “From my perspective I see the shooting, I see the pops go off, the lights flashing … and I have to make the decision: Do I really want to run across the stage or do I want to go in this room, and hope for the best.”
…
Despite the tragedy, the band intends to finish its tour. Frontman and band cofounder Jesse Hughes wants Eagles of Death Metal to be the first band that plays at Bataclan when it reopens.

“I cannot wait to get back to Paris. I want to play again,” he said. “I was there when it went silent. Our friends went there to see rock ‘n’ roll and died. I want to go back there and live.”

This interview is important; its contents—and those of other interviews like it—serve as a stark reminder of what terrorism means outside the context of political battles and arguments over whose PC culture is the most likely to get people killed inclusive.

In the long run, that context is just as dangerous as the attacks that created it.

Can’t imagine what it must have been like to be in that concert hall playing to a packed show, and the next moment watching the fans that were there to see you play being murdered.

I love that they want to go back to Bataclan. If there’s any place that deserves some good memories again, it’s Paris.

They were singing “Kiss the Devil” at that ugly moment.

Maybe this event will wake them up to the truth that evil isn’t funny.

Maybe they’ll mature. But I doubt it.