No aliens were involved in sky show… illegal or otherwise. 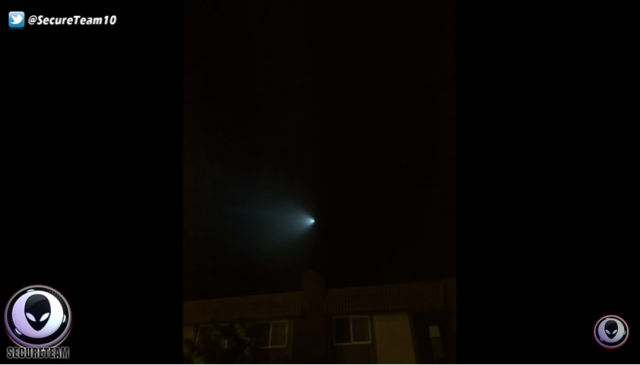 Residents of the American Southwest were spooked by a US Navy missile test this weekend.

Panic and speculation spread Saturday night when a bright white light shot through the night skies in Southern California.

Residents posted a flurry of videos on social media, together with theories of aliens or meteors. Others made panicked calls to law enforcement officials.

But not to worry, U.S. military officials said. It was a planned missile test.

The Navy Strategic Systems Programs held a scheduled missile test flight at sea from USS Kentucky, which is a ballistic missile submarine. The test was conducted off the coast of Southern California, the Pentagon said in a statement.

It said the missile was not armed.

Residents of Arizona and Nevada also reported the streaking object in their skies.

Between memories of 9-11 and the deteriorating condition in the Middle East, it is no wonder why Americans were on edge. However, many were more keen on attributing the display to an extraterrestrial source.

Los Angeles #UFO? It was not a #comet. My son saw the Unidentified Flying Object in Hollywood. This is his video. pic.twitter.com/oDQG7XWpro

Returning to more mundane reasoning, the Navy is perplexed about the level of attention the test received.

Loren Thompson, a military analyst who used to teach nuclear strategy at Georgetown University, told The Washington Post that the Navy finds itself in a tough position. Naval officials can’t make public pronouncements about their tests without risking more attention from foreign spies who are known to linger off the Pacific coast in foreign trawlers in hopes of monitoring military operations.

“However,” Thompson said Monday, “I’m not sure the Navy realized that launching at night next to the L.A. Basin may have attracted such a huge audience. The launch was at about 6 p.m., but if it had occurred several hours earlier or later it would have been a much smaller audience.”

He added: “We have entered an era when anybody can reach a large audience using social media and the blogosphere, so the military needs to look closely at the implications of testing close to population centers.”

The reason for the unusual display? A unique set of launch conditions:

According to John Daniels, a public affairs officer for the Navy’s strategic systems programs, Thompson may be onto something about the unexpected attention. Launches that occur during daylight hours resemble a rocket shooting skyward. At night, observers might briefly see a streaking fireball emanating from the rocket engine.

Saturday’s test, Daniels told The Post, occurred during unique conditions: On an exceptionally clear evening, with the sun disappearing on the horizon at just the right time.

The Navy has performed similar launches many times, Daniels said, but never with effects so visible that they caught people’s attention from San Francisco to Arizona.

“That big, blueish green hue that everyone saw was a result of just that time of day,” Daniels said, noting that the fading sunlight was reflected from the rocket’s motor. “Had we done it earlier in the day or later in evening you would have still seen the missile, but probably not the same way.”

Phillipe Tusler of Irvine, CA, offered an interesting perspective on the nature of this test.

The reason for the secrecy is that the location of any of our strategic submarines is top secret. I worked on the Trident I C4 program (minor role) in safety testing. We do periodic launches to test all kinds of things, including propellant, guidance, and destruct sequences. The D5 is a three-stage solid propellant ICBM (It’s all on Wikipedia). Solid fuel puts out a lot of flame and light, so the launches are very visible. And yes, sometimes we test one just to remind our enemies or fairweather friends that we’ve got them, and can put a MIRV right into their back yard. What I find interesting is that these missiles are star-guided. They pick out the brightest star and use that for navigation. That way, if all of our GPS satellites are taken out, we can still hit back.

Tusler’s last remark is something to note. Because an attack on our satellites is now an increasing concern, as it would render the GPS systems so many of our systems rely upon, alternative navigational systems need to be identified.

No word on whether the test was a success as far as the Navy is concerned, but it sure was a social media hit this weekend!

Having spent a fair amount of time in SoCal, the possibility of alien life forms is not a stretch of the imagination.

Last time out there I was walking down a sidewalk in LA, and some life form dressed in a Spiderman suit with a gorilla mask was walking down the middle of the street screaming at passing cars about “%$#&ing high gas prices!” Evidently that life form is so common that the creature barely got a glance from anyone.

So yeah, I’ll go with aliens. Anywhere else, I’d go with military.

There is a lot afoot no one is putting together, yet.