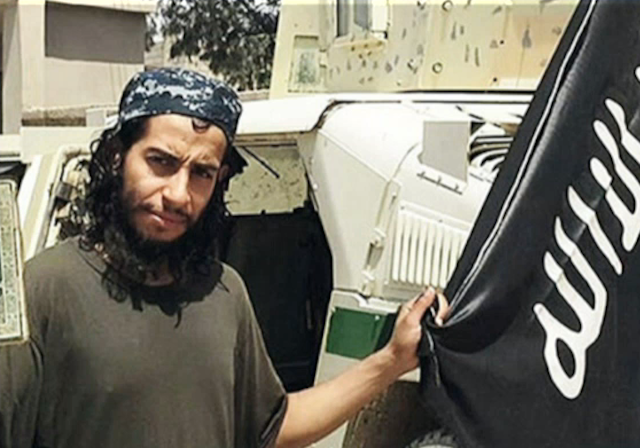 Abdelhamid Abaaoud, the mastermind behind last week’s terror attacks in Paris that killed 129 people (so far—some victims are still in critical condition) and wounded hundreds more, was confirmed dead following a dramatic police raid on an apartment complex in the Parisian suburb of Saint-Denis on Wednesday.

According to multiple reports, French officials fired over 5000 rounds into the flat where intelligence revealed the terrorist and several other people were hiding. According to Fox News, Abaaoud was identified via skin samples found following the raid. His cousin also died—she blew herself up in a suicide attack on the scene.

Two counterterrorism sources tell Fox News his death marks a major advance for the investigation, but add they are operating on the premise that more senior suspects connected to the plot are still out there.

They describe Abaaoud as the “Mohammed Atta” of the Paris attacks, the “tactical guy” who identified and pulled together the operatives, in the same way the lead hijacker kept the 9/11 teams on course.

They emphasize that based on his skill set and experience, Abaaoud was not the strategic planner, in the same way Khalid Sheikh Mohammed was for the 9/11 attacks. The Paris massacre involved a plot or plots with multiple layers and upwards of 20 players, according to the chairman of the House Homeland Security Committee, Texas Republican Michael McCaul.

Police say they launched Wednesday’s operation after receiving information from tapped phone calls, surveillance and tipoffs suggesting that Abaaoud was holed up in the apartment. Investigators said it was still unclear how he died. Eight other people were arrested.

Abaaoud has been linked to numerous other attacks and attempts—including the train attack this year, which was narrowly foiled by three American servicemen.

French Interior Minister Bernard Cazeneuve revealed that his office received intelligence that the terrorist—who was Belgian—may have come to western Europe via Greece, but could not confirm reports that he hid amongst refugees following the same path.

Nine other people have been arrested in Belgium in relation to the Paris attacks, and officials have warned the French people that they are anticipating the possibility of further attacks—even those of a biological or chemical nature.

In the States, the FBI announced that there is no current link between the attacks in Paris and specific threats to targets on American soil:

FBI Director James Comey said Thursday there are “no connections at all” between the Paris attackers and the United States.

In a briefing with Attorney General Loretta Lynch, Comey also said there are no specific or credible threats targeting the United States onn any scale.

While there were no imminent threats, the FBI director said federal investigators have intensified surveillance on “dozens” who might be at risk of copying the Paris assaults.

Previously, Comey has said there are 900 active investigations involving the Islamic State recruits or other homegrown violent extremists.

I wouldn’t call someone who shoots up restaurants and other undefended areas a “mastermind”. I’d just call them a thug, murderer or plotter.
Doesn’t take much intelligence to shoot and kill unarmed folks.

Saw an amusing post on this topic this morning:

Instant Retribution For The Terrorist Apologist In Chief. Hours after declaring the JV team “contained” – they shot hundreds of people in Paris. Obama doubled down on his malfeasance this week, saying that Republicans were afraid of WIDOWS AND ORPHANS. Right after he said that, a female terrorist blew herself up in Paris. But it gets worse. It turns out that the Charlie Hebdo terrorists were ORPHAN immigrants.
http://realclimatescience.com/2015/11/instant-retribution-for-the-muslim-apologist-in-chief/

We are doomed in Europe even with the rise of the various sane parties throughout the EU. There is no hope of sanity in the ruling parties, the media or with the academics.