The debating will continue until morale improves 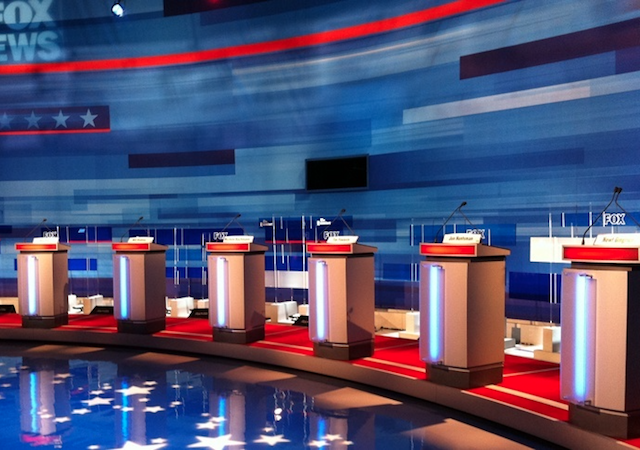 Once again, we’re looking at two sessions—a kids’ table discussion, and a prime time debate featuring those candidates who meet one of three criteria in a set series of polls. If a candidate wants to grab a podium on the main stage, he or she will have to poll at an average of 3.5% nationally, or hit at least 4% in either Iowa or New Hampshire. To sit at the kiddie table, a candidate must scratch together at least 1% in four separate national, Iowa or New Hampshire polls.

Paul is on the bubble for the debate. He clears the national hurdle of 3.5%, but doesn’t average 4% in either of the first two states to vote in the 2016 nominating process.

Christie would make the main debate stage as of Friday — but he did not qualify in the last GOP debate, hosted by Fox Business Network.

CNN is including a long (long) list of polling sources in its criteria. It will consider data collected between October 29 and December 13 from:

Note that we’re not just working with national polls; CNN is slipping in more localized surveys in key primary states. Will this narrow the field? (Will anything narrow the field ever?) If I were to hazard a guess, I would say if it does, it will only relegate one, maybe two candidates to the ever-shrinking early debate.

The top candidates here are no shock—but the dynamic will change with Christie back on the stage. I see this going down one of two ways: the other candidates will either ignore him completely, or welcome him back to the adult discussion by pointing out how the voters didn’t have enough faith in him to include him in the last adult discussion.

Either way, it should be interesting to see how candidates like Christie, and Paul—who is also losing steam—distinguish themselves in terms of policy. This debate will also be important for Jeb Bush, who did better by a factor of 1000 in the last debate but still isn’t resonating with voters not already committed to supporting another Bush.

As for Trump, Carson, Rubio, and Cruz—I expect fireworks. At this point, the race needs them.

It would seem to me that raising the bar on the criteria at this point would be the way to go, not make sure more are on the main stage.

At this point the Main stage should be Trump, Carson, Rubio, Cruz, and (even though it pains me to say it) Bush.

It is time for the party to start looking at folks and telling them in no uncertain terms; “It’s time to bow out gracefully”.

“Moderator” is an interesting word to use for a clueless democrat operative who has an assigned mission at these events.

Aren’t these the same candidates who must win primaries in at least EIGHT states just to be ELIGIBLE for nomination?

That’s kind of what I was thinking, I mean there aren’t that many debates left and we still haven’t even got it down below half a dozen.

Yes, but we haven’t gotten it down to the right ones. Our betters, I mean the GOP leaders, have been so very patient with us; you’d think we’d take the hint.

Really what they should be doing is that with every 2nd successive debate, they should be shrinking the number of individuals in the main debate platform by 1. Thus, this debate, there should only be … Seven? If I’m counting right?

Base it on the polls, with the highest polling candidates being on the main stage.

It would relegate Fiorina and Christie to the early debate, and give more time to the current leader candidates.

The caveat with this plan is that those who don’t make the main stage will fight it out in the earlier debate, and have a chance to shine there, potentially moving back to the main debate stage as individuals like Kasich, Paul and (dare I dream) Jeb! get pushed down into the secondary debates as the campaign season wears on.

I thought we were promised an improvement in moderators. Blitzer is not only liberal, he’s dumber than sled tracks.

Seriously. Harwood was bad enough. Blitzer is a straight up idiot.

Seems like CNN is using as many polls as possible, so it can dilute the debate stage with as many people as possible and lower the speaking time for the top contenders, to help Hilary in the general.

In the words of Yoda. “Surprised, I am not!”

Can someone explain this? Can you, Pee Wee Prebus?

Christie has never, and never will be, in any kind of position to even compete for the nomination, much less win it.

He’s a Democrat with an R next to his name.

Likewise, Bush did moderately in early polls only because of name recognition. The moron that bragged he could win without conservatives was NEVER going to get the nomination. He thought he could schmooze the establishment and they’d rig it for him.

Organizers of these “debates” will need to keep the threshold low in order to keep Jeb! at the grown-up’s table.

I like the way they wait until the last minute to decide what the criteria are. That way, they can pick and choose who gets in while still pretending the decision isn’t completely arbitrary.