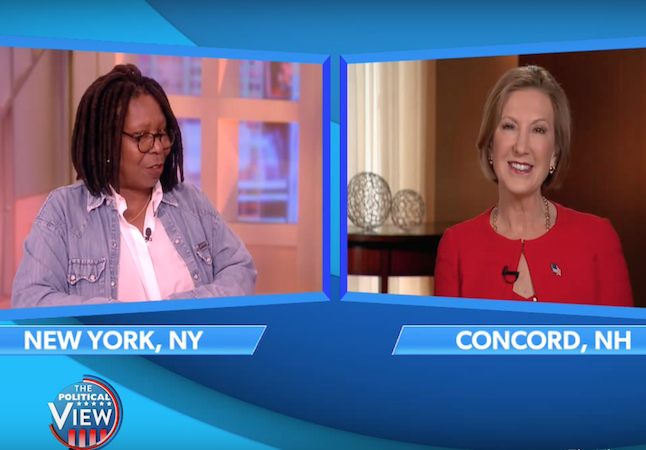 Back in October, the ladies of “The View” decided to take out their political frustrations on Carly Fiorina’s…appearance.

The height of discourse, this show is not.

At any rate, their comments ignited a firestorm of intense politicking that culminated with a second appearance for Fiorina—and a panel in high dudgeon. Whoopi Goldberg kicked things off by bringing up View-gate, and Fiorina took the ball and ran with it.

Goldberg later asked if Fiorina would be able to handle humor should she become president.

“We saw that you were a little upset with us about a comic comment that was made, so how will you… get a thicker skin to accept some of the humorous things that will be said about you?” Goldberg asked.

“If you meant [the] comment about my face being demented as a Halloween mask as humor, so be it… I have a real thick skin,” Fiorina fired back.

Joy Behar then chimed in, insisting she was a comedian who jokes about all the candidates.

“You know what Joy, you can say whatever you want. I’m not going to stop that,” Fiorina said. “And don’t worry, I have skin plenty thick enough to take whatever people throw at me. I think there are real issues in this nation that we ought to able to discuss in a fact-based [conversation].”

You can watch the full interview here (in two parts):

In this second chunk, Fiorina takes on gender, and the possibility of a final contest between herself and Hillary Clinton. When confronted on why she believes she is Clinton’s “worst nightmare,” Fiorina was quick to call out Clinton’s repeated and blatant use of the gender card, saying, “I would never ask people to vote for me just because I’m a woman. I’m gonna ask people to vote for me because I’m the most qualified person to win this job and do this job, and restore possibilities in this nation.

The one thing that turned me on to Carly Fiorina is her ability to counter criticism without coming across as shrill or combative. This is an acquired skill, and one that has clearly carried Fiorina to the top. You can tell the “View” hosts aren’t used to this type of reaction—after all, every member of the panel has defined herself at one point or another by her willingness to shout down anyone with a differing opinion.

At the end of the day, what matters here isn’t Fiorina’s actual appearance on a television show, or the content of her comments (although she manages to bring substance to the table every time I catch her on camera). What really matters is that, time and again, she has proven her ability to control the narrative, control the conversation, and drive her own talking points home without having to worry about whatever is flowing from the other side of the table.

That’s a much more valuable asset than simply being able to shout the loudest. Sorry, Joy!

Since she is still polling in the low single digits, her talent for a quick response has not carried anywhere, let alone to the top.

I think she has nice legs too.

It’s really unfortunate that despite her attractive talents and skills she remains a GOPe Amnesty shill hack on the issues and not worth serious consideration.

When Whoopi and Behar make fun of Hillary for being a stretched faced old lying hag, we’ll know that really is their style of (bad) comedy.

But as Hillary parts out our nation by the piece for billions to her corrupt foundation, The twisted sisters at the view will only gush with praise for Witch Hillary.

this is my comedy … lol

Joy Behar then chimed in, insisting she was a comedian who jokes about all the candidates.

So, all you have to do is insist your a comedian, and you’re a comedian?

I insist that I’m rich and good looking!

May I join you, and insist the same?!!

Sure you can. But so far, it doesn’t seem to be working for me. 🙁

To Liberals, making nasty cracks about people they don’t like really is humor. It’s only a problem if you make them about someone they like.

If their comments about Fiorina’s face are a sample of Behar’s and Goldberg’s comedic abilities it’s lucky for them they have a gig on “The View” where neither ability, talent or brains are necessary.