No matter what the people want 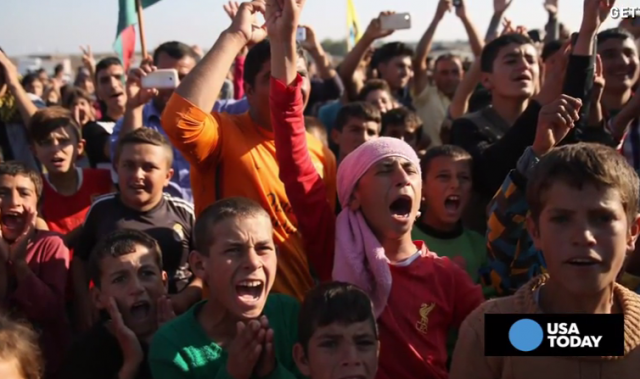 Canada joins the liberal leaders of the US and much of Europe and plans to go ahead with the admission of many thousands of Syrian refugees:

Canada plans to fly in 900 Syrian refugees a day as of next month, according to media reports, as the defense minister said showing compassion for these people sends a message to Islamic State extremists.

Canadian officials said details of a plan to take in 25,000 Syrian refugees by year’s end would be announced Tuesday.

The Canadian media reports come amid fears that IS jihadists could slip into the country posing as refugees, in the wake of last week’s attacks in Paris that killed at least 130 people.

The bill is projected to be 1.2 billion Canadian dollars.

Canada has come up with a stupendous rationale for what they’re doing. The liberal Canadian Minister of Defence (who is a Sikh, by the way, with what appears to be a pretty strong resume) has made some statements that are similar to the reasoning of liberals in this country as well:

This crisis is not just about a humanitarian project,” he said in his opening remarks to military commanders and defense ministers from around the world.

“This also sends a great message to ISIS that you might create this environment for us, but we will not let you take advantage of this,” he said, using an alternate acronym for the IS group.

“By doing our part for this, we are actually hitting ISIS in a different way as well.”

I am certain the men of ISIS are quaking with fear and anxiety over this turn of events.

Oh, and the people of Canada? What do they think?:

The Ipsos poll, conducted exclusively for Global News, found that 60 per cent of Canadians disagree with Justin Trudeau’s election promise to relocate 25,000 people displaced largely due to the conflict in Syria.

Opposition is highest in Alberta with 70 per cent and lowest in Ontario with 56 per cent.

The major concern among those who oppose the Liberal’s refugee plan is security and the fear that appropriate security checks will be limited in order to hit Trudeau’s timeline.

The poll found 67 per cent of Canadians believe terrorists pretending to be refugees could enter our borders.

In the US, when asked the same question about whether terrorists pretending to be refugees could enter this country, 81% agreed.

The liberal governments of both countries, however, seem to be comfortable with going ahead despite the overwhelming disapproval of their populations.

No doubt Canada’s young and telegenic speechmaker Prime Minister Justin Trudeau is bringing his formidable experience as teacher and youth advocate to bear on this and other pressing issues.

[NOTE: I don’t know where to put this factoid, but I find it truly amazing that Richard Nixon seems to have correctly predicted Justin Trudeau’s future when he (Trudeau, not Nixon) was only a few months old:

…[Justin Trudeau, soon of Prime Minister Pierre Trudeau] spent his early years at 24 Sussex Drive, the prime minister’s residence in Ottawa. In fact, only months after his birth, American president Richard Nixon predicted his political future during a Canadian state dinner with Trudeau’s father. Nixon said, according to BBC news, “I’d like to toast to the future prime minister of Canada: To Justin Pierre Trudeau.”]

“By doing our part for this, we are actually hitting ISIS in a different way as well.”

I suppose, if they’re doubled over laughing at the idiot infidels, it is hard to carry out the daily beheadings.

Great news: now we need to build a wall on our northern border, too.
(bright side = job creator(s)?)

Whatever happened to Arab/Muslim brotherhood? There’s a bajillion different Arab/Muslim countries in the Middle East, and not a one of them can take in refugees?

“The Ipsos poll, conducted exclusively for Global News, found that 60 per cent of Canadians disagree with Justin Trudeau’s election promise to relocate 25,000 people displaced largely due to the conflict in Syria.”

So it can now be assumed that the populace of Canada may be already suffering from voter remorse to the fact that liberals everywhere are lying seditious parasites that got into office by hook or crook, eh?

Welcome to the world of chaos Canada!

And anybody in Canada who objects can be charged with hate speech.

Canadian voters made their bed a month ago. Now they must lie in it.

I thought white guilt died in 2008 when Obama was elected. I guess it’s still very alive and well and spreading across the Western world.

LOL. Ship them to Yellowknife. I hear it’s beautiful this time of year.

You’d think they’d have learned by watching the transformation of the UK since they began importing large numbers of Pakistanis.