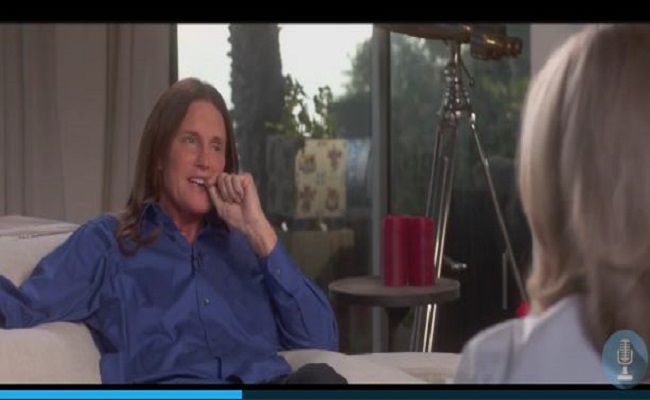 Hero of transdom or betrayer of feminism? Lately, consensus sides with the latter.

Formerly Bruce, now Caitlyn Jenner has the self-professed feminist community up in arms. Named one of Glamour’s Women of the Year, Jenner’s remarks aren’t quite the homer he (she?) may have hoped.

According to Glamour’s Los Angeles LGBT Editor, Jenner was awarded Woman of the Year because, “ehe made the decision to transition publicly—so that in the future kids don’t have to wait until they’re 65 years old to discover who they are.”

At the time awards were announced, Glamour wrote:

A year ago Caitlyn Jenner did not have a name. The Olympic hero turned reality-star patriarch was still living a phantom existence, her changing appearance igniting a tabloid frenzy around the rumor she’d run from for most of her 66 years: that she was transgender. She was confined to her house in Malibu, California, where she’d been forced to build a wall to shield herself from paparazzi cameras. “There I was, in this beautiful beach house, all by my little lonesome, right back where I started, dealing with the same issues I had when I was 10 years old,” she remembers. Her breaking point came when photographers showed up outside her doctor’s office, spying on what she’d hoped could be a private medical procedure to reduce the size of her Adam’s apple. That night she couldn’t stop thinking about a gun she kept in her home. “Go in there, no more pain,” she recalls saying to herself. But in the light of morning, she had a revelation. “I thought, ‘OK, you transition, big deal! You are still alive. You have to make your life interesting.’ ”

So Caitlyn decided to live. She knew it wouldn’t be easy. She had two skeptical audiences to contend with: the millions of fans of multiple iterations of Bruce, both Olympic savior to a nation and beleaguered patriarch of the Kardashian-Jenner clan; and the transgender community she was suddenly meant to represent. “But I started thinking, Maybe this is why God put me on earth,” she says. “This issue has been swept under the rug for so long. I need to tell this story on the highest level you can possibly do it. Not just for me but for this entire community.”

What a difference a few weeks makes. Now, thanks to Jenner’s comments upon receiving Glamour’s prestigious award (apparently it’s a bit deal to Hollywood types), the feminist community is not so sure they want Jenner to be part of the club. Coincidentally, Jenner has also said she’ll still be voting Republican in 2016.

Rose McGowan, actress and former girlfriend of Marilyn Manson was particularly incensed with Jenner’s Glamour award acceptance speech. Like many, McGowan was upset over Jenner’s comments concerning the hardest part of womanhood — getting dressed. Amazingly though, Jenner never actually said that. But far be it from facts to get in the way of outrage.

As we’ve seen time and time again, all it takes is one misleading headline and for a new story to make its way into the annals of social discourse. Music Channel (I presume, because I haven’t watched it years) VH1 picked up McGowan’s Facebook post on Jenner’s speech and endorsed her wrath:

can take a joke. And I take it as much as I dish it, which admittedly happens far too often. But hearing Caitlyn Jenner say deciding what to wear is the “hardest part about being a woman” when accepting Glamour’s Woman of the Year Award yesterday didn’t make me laugh. And I wasn’t the only one who wasn’t amused by her attempt at a joke.

Rose McGowan, appalled by Caitlyn’s acceptance speech, took to Facebook not only to serve an entire Starbucks’ worth of piping feminist truth tea, but to enlighten us all.

“Caitlyn Jenner you do not understand what being a woman is about at all. You want to be a woman and stand with us- well learn us. We are more than deciding what to wear. We are more than the stereotypes foisted upon us by people like you. You’re a woman now? Well f—king learn that we have had a VERY different experience than your life of male privilege.

She also posted graphic photos with Caitlyn’s quotes on them, including a woman getting raped, one being followed, another who had just given birth and Nicole Brown Simpson (O.J. Simpson’s late wife) covered in bruises.

“Let me amend this by saying I’m happy for what she’s doing visibility wise for the trans community, and I’m happy she’s living her truth, but comments like hers have consequences for other women. How we are perceived, what our values are, and leads to more stereotyping. If you know you are going to be speaking to media about being a woman, maybe come to understand our struggles.”

I hope this tea was a scorching wakeup call. I agree with Rose in that Caitlyn has been an immensely huge force in helping educate and shift our country’s view of transgender life. I respect her for trying to immerse herself in the trans community and previously speaking to serious issues it faces. But I can’t help feeling annoyed that a privileged, white person, who’s fairly new to living life publicly as a female and previously presented herself as a highly-publicized, praised and accomplished male, thinks it’s OK to make jokes like this at our expense. There are females, and transgender females, whose lives are at risk every day just for being who they are. And your biggest problem is picking out a designer outfit?

MALE PRIVILEGE. Because of course.

I can’t help but wonder what the response might have been had Jenner been sporting “Hillary 2016” attire. But I suppose we’ll never know.

Neither. The bastard is crazy.

I have to agree – Mr. Jenner is a deeply troubled man who seriously needs psychiatric intervention.

Jenner is a transvestite: you pull of his dress, and you have the same guy who put it on, ding-dong and all.

Sorry, there’s no ‘transgender’ here. For that, Jenner would have to undergo the knife – and a boatload of hormones.

It’s part of the process. If you’re getting reassignment surgery in the US and most 1st-world surgery clinics, they insist you spend a year as the target sex before undergoing surgery.

Check back in a year and we’ll see how committed Jenner is.

First-world centers no longer do sex reassignment surgery, because the outcome is so poor.

Undergoing the knife doesn’t make you a woman.

This is by no means a slight to women out there who are dealing with infertility; but being a woman is being able to grow a baby, being able to birth a baby, and being able to feed a baby–all with your body, all of which are nothing short of a miracle. Bruce’s body is not physically capable of this, never has been and never will be.

And if they do the loseadicktomy he’ll still have to have his prostate and his PSA checked by his “gynecologist”.

Here, it looks like she took her boobs off.

” ““ehe made the decision to transition publicly…” ”

I had to click through to make sure that was a typo. I thought for a moment that someone was introducing a new pronoun.

“The athlete formerly known as Bruce” – isn’t it?

I dunno,some weirdo pervert that people are all worked up about. What’s for dinner?

Uh oh…you said “transgendered”. They hate that. It’s “transgender”, implying that the condition was naturally inborn and not the result of external influence or choice.

I always use “transgendered”, though…

Nothing like “celebrating” mental illness, eh? No one can transition into another gender. They can only mutilate the body that they were born with.

Just more pop culture claptrap to distract from the reality that their boy Barry is the worst president ever.

I don’t even care.

There are many things that are far more important… terrorism, gun control (really people control), a push for tyrannical/socialist government in this country, the false narrative of catastrophic anthropogenic global warming (I refuse to accept the term “Climate Change” because the climate always changes).

I like how the article implied people were talking about him being a mentally ill crossdressing self-mutilator all his life. “Rumors” heh.

He wasn’t born this way a paraphilia and self mutilation desire cannot be genetic or that gene would die out. He’s cashing in on that umpty million dollar deal with E and when he is done he’ll go back to being just Bruce.

They will never take you seriously until you lop it off, Bruce. Maybe have it mounted on your Olympic medal, so you can proudly wear it around your neck…