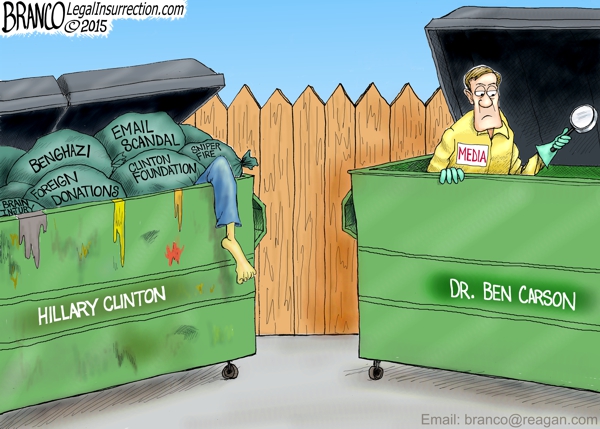 Mr. Branca: you, sir, are brilliant in telling a story.

Let me refer to you by your real name: Mr BRANCO!

It is the old ” Double Standard,” put out by the Regressive New Democrats. They don’t talk about real issues. They distract to ” Fluff Stories.” Since so many Liberal type get their News from ” Late nite Comedians,” not realizing how slanted it is, sometimes to get a Laugh, even if it is not true.

That’s about all we can expect from the “Democrat Operatives posing as journalists”.

By June, if not earlier, one or more anonymous female accusers will come out with accusations of something vaguely resembling sexual assault that allegedly happened 10-20 years ago that have no witnesses and were never reported and will be proven impossible to have happened after being touted as true by the media from June to August. The only thing provably true will be that the women worked in the same building around the same period of time, which is close enough for the media to run with.

Love the compare and contrast. Who’s the body in Hill-dawg’s dumpster, though?

Oh Branco!! That is PERFECT!! You’re a cartoon genius! Can’t wait to share this one. Thank you. 🙂

I think that life, all of life, is played with rules that could be classified as double-standards. Obviously Hillary is getting a pass, but what Carson did was also unethical. Hillary is playing to her audience, which are vocal, loud and encompass the media. We saw the same thing with her husband and his recorded adulteries. I think the only thing that could actually stop Hillary is if someone could find hard evidence of a murder, and the body it referred to…. Even then, hard core Democrats would vote for her. Look how the Dems have stuck with Obama, while he’s stealing their money and giving it away to every goat herder he can find.

“but what Carson did was also unethical”

You a politico writer?

You seem to be ethically challenged. So far, nothing Mr. Carson has claimed has been disproven and much has now been substantiated.

Oh puh-leeze! Everybody knows that being the top pediatric brain surgeon on the planet is unethical.

Why is a mouse as it spins? The higher the fewer.

“You seem to be ethically challenged. So far, nothing Mr. Carson has claimed has been disproven and much has now been substantiated.”

Well except for that test hoax at Yale. I mean the guy who wrote it said he’s only 99% sure it happened the way Carson said it did.

Actually theer wasn’t just one guiy who wrote the test, and he didn’t say that the story in the book is completely accurate. Just that there was such a fake test.

He doesn’t even know if Carson took the test. He wasn’t there when the fake test was given.

The guy who wrote it, and hsi agent, isn’t speaking to the press. Carson almost certainly didn’t tell it to him that way.

You know, when you write a book with a co-writer and you say there was a class, a lot of times they’ll put a number or something on it, just to give it more meat. You know, obviously, decades later, I’m not going to remember the course number.

Actually, there were a number of other changes the co-author/ghostwriter made, and it is considerably garbled anyway.

1) It happened during Carson’s freshman year in Yale, on Tuesday, January 13, 1970, and not during his junior year. That’s why the course number is not 300 something.

2) The whole class did not take the fake make-up test, but only “several students”

3) The real professor was not involved in any way, like the book had it, but only a fake procter.

4) It was not some kind of psychology experiment. It was a hoax done by the Yale Daily Record, then possibly edited by Garry Trudeau, who later wrote Doonesbury.

5) Carson’s picture was not in any paper. But it is quite possible it was taken, and it is possible that the photographer pretended he was from the Yale Daily News.

6) It all started with a fake copy of the Yale Daily News (which also may have mad ethe claim it would not be published tomorrow.) In the fake paper there was a notice t
that copies of the test taken in Psychology 10 had been burned and there would be a make-up test held at a certain location. This was the only notice anyone had of it. The real professor was not involved.

They actually staged the make-up test. It has been argued that this was past finals, but someone interviewed by, I think, Buzzfeed said it was during finals, and he had taken the course earlier, and he was one of thse involved in making up the questions, and it was indeed more difficult than the real test.

How far they carried the hoax is not clear, but Carson may indeed have been given $10 (that would be for legal reasons) and maybe even told that was for being honest – or perhaps for some other attribute.

These people were going to carry the hoax further. The Yale Daily News ran a story about this partially to emphasize that that had been a parody paper and they were going to publish Wednesday, January 14, 1970 – and you were reading that paper.

There are no copies of the Yale Record available from between 1969 and the late 1970s. That’s curious.

Maybe Carson told his ghostwriter that that $10 was God’s reward to him for being honest – that might make sense.