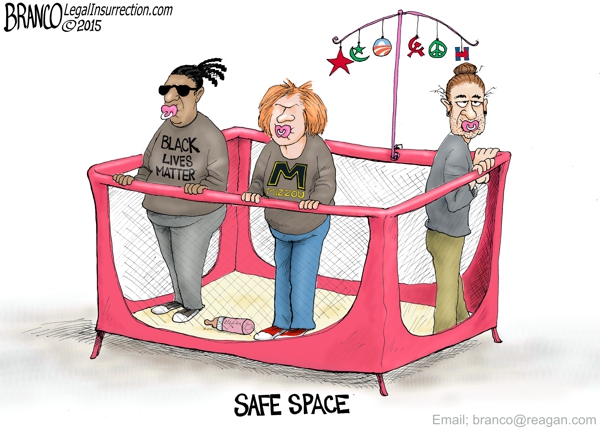 Where are the snowflakes? Spot on as usual Mr. B., meme of the day is crybullies.

Who is the woman on the right? Someone at Yale?

I thought it was Caitlyn/Bruce Jenner?? Stubby whiskers.

I’m betting it’s a Yalie. Bucelyn Jenner’s really not much of a whiner.

Feh, should be “Brucelyn”. It’s too damn early…

Perhaps just a generic he/she then.

ROTFLMAO – Me thinks “A.F. Branco” stands for Another Funny Branco.

Is that a self portrait, Branco? 😀

Never occurred to me that that could be a man.

Maybe it’s the new “Modern Man” from the NYT?

We don’t know how it self identifies.

True. Maybe we should ask it what locker room it uses?

Love the man-bun! This piece is another gem…so much mocking on so many different levels!

Always enjoy your cartoons. But this one was spot on. I felt compelled to post my applause.

One passy to rule them all!

The comments are exceptional today,Y’all. 🙂 Thank you!

The third figure is that ” Hippie,” Prof. at Missouri who is teaching these good little ” Marxists,” how to riot and not let the press report it. Parents paying to have their children indoctrinated. Sad.

Guess there are too many immature people attending college. But, hey this is the end result of all that phony self-esteem garbage which began because of all those touchy-feely liberals. Now everything that touches them makes them feel bad.

Not immature: just spoiled and easily corrupted. (The deal being, we’ll indulge your spoiled asses so long as you act like insane brats — for us.)

Portraying them as babies makes them seem harmless. They are anything but. They represent a very clear danger to the future of our universities and as well as a threat to the racial harmony of our society.

To me, social justice is these kids going $150k into the hole to pout and throw a tantrum.

Life has so many real problems in store for them. I hope someone is there to film it as it unfolds. I want to show it to my own kid as a warning.

Wait until Blobama “bails them out” and puts their $150K debt on your tab.

The proper response to that scenario is to Go Galt. F ’em if they can’t take a joke.

Excellent and completely true as always Mr. Branco! You can say more with one picture than most folks can in and entire speech.

Missing from the cartoon is an Obama administration-issued machine gun strapped back of the blacklivesmatters activist.

#BlackLivesMatter Leader Warns US Needs New Constitution or “There will be Bullets
http://www.thegatewaypundit.com/2015/10/blacklivesmatter-leader-warns-us-needs-new-constitution-or-there-will-be-bullets/

These psycho Obama brownshirts are going to be murdering people soon, and at Obama and Valerie Jarret’s behest. Look, the goal is chaos, so Obama can declare martial law.

Many of us have been saying this since before the lunatic was sworn in. Now, it’s coming to fruition.

Time to push back. We’ve started that push-back by forcing out Boehner, in the form of supporting Trump. Time to do the same with that s-bag McConnell and Pee Wee Prebus.

This is Obama’s final one-year push to tyranny. Our reaction is now or never.

Declare martial law? Who cares? What are they going to do?

Most governments in this country are in the red right now. Where is the money supposed to come from for any enforcement of a martial law declaration?

I agree it may be a dream of DonkeyEars but I think all this civilian army word-spewing is designed to scare the patriot wing and distract from the true dangers facing our society. Don’t fall for it.

The money to pay for martial law? Martial law is about transfer of absolute power of government to a relatively few amount of people, who will then likely use that power to commit genocide. They don’t count pennies.

The civilian army is a dream of the left (like Mao’s Red Guard), not DonkeyEars.

Given the unleashing of #blacklivesmatters thugs across the nation and the hurried importation of thousands of young terrorists from the Middle East, and the bankrupting of our economy (remember, we’re not 20 TRILLION in debt, versus 500 million when Obama took office), what other true dangers do we face here? Is it Obama and Eric Holder’s enabling of black panther thugs at polling booths? Is it Obama and Lois Lerner’s using the IRS to oppress political opposition? Is is Al Shaprton visiting the Obama White House almost 100 times? Is it Obama decimating our military of patriotic officers and replacing them with sycophants? (Or is it allowing transvestites to prance around in military uniform on active duty?) Is it federalizing police departments across the nation? Is it Obama’s military arming of every administrative agency in the federal government, including the department of education?

Platypus, when you say, “What are they going to do?,” consider the fact they might shoot us dead.