Branco Cartoon – I Have Seen The Enemy

Branco Cartoon – I Have Seen The Enemy 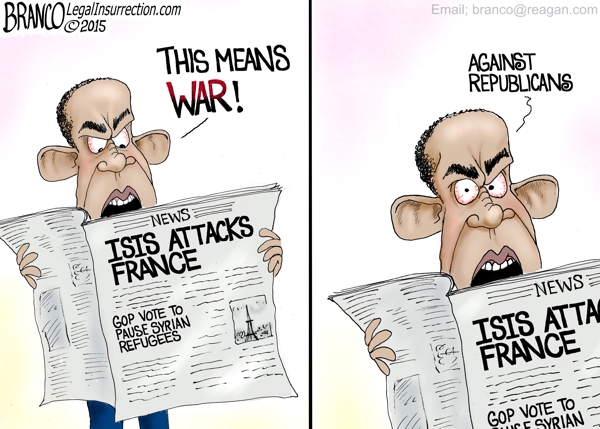 Brilliant!! Once again, you NAILED IT! 😀

Such a brave warrior! He’s the president we need, but not the one we deserve!

According to the dems at least…

SO true it’s frightning! You rock! As soon as I can ever save some money, I want to buy your book. (So poor I can’t pay attention) You nail it every single day without fail..as a woman who is supposed to always be right, I’m jealous! God bless you!

TY 🙂 … Oops on the thumbs down, hate it when that happens.

That creature occupying the White House is mentally unstable. He needs to be removed from office and tried for treason.

Removing him from office requires 67 senators. Where are you going to find them? We already learned in 1998 that no Democrat will ever vote to remove a Democrat president.

Trying him for treason is impossible, because he hasn’t committed it. What overt act has he done, in front of two witnesses, to help one of the USA’s enemies? It’s not enough to show that he knew what he was doing would help an enemy; treason requires that he did it because it would help the enemy, not for some other reason.

He’s violated his oath of office by failing to faithfully execute the office of president and failing to preserve, protect and defend the Constitution of the United States. If that is not cause for impeachment, I don’t know what is. It matters little what his motive or intent might be – his overthrowing of the Constitution, acting as a petulant little emperor, his Iran deal, along with many other offenses, demonstrate that he is a traitor and should be tried for treason.

I realize that the GOPe consists of old biddies who prefer the status quo, but that doesn’t mean that Zero should not be impeached. “Ought to” and “will” are entirely different concepts ~

Heh. Makes perfect sense. Nobody outside the USA is afraid of Obama. Here, he is feared because he can ignore laws, delay court decisions, lie to the people, coerce RINOs, and follow his agenda to be King of Muslims – and do all that using power of the presidency. So, it’s easy for him to act like the tough guy at home.

It reminds of the old saying, “I have seen the enemy, and he is us.” SHAME on all that voted for this monster and it’s henchmen.
Another Bullseye Branco! Good luck with your book. I pray it sells like hotcakes.