“What kind of failure of intelligence is that?” 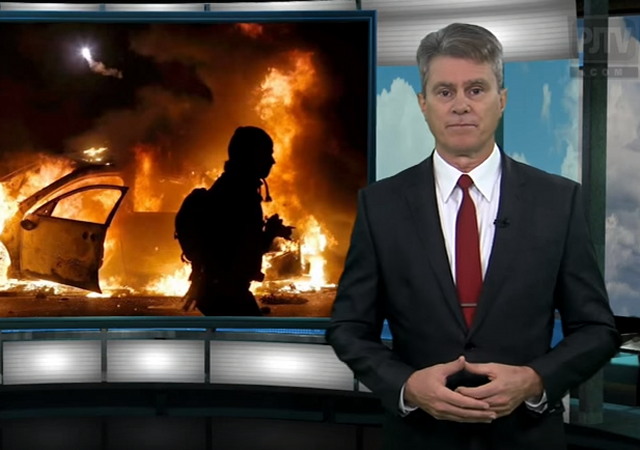 In the newest edition of Afterburner, Bill Whittle lays blame for the recent terror attacks in Paris and Mali at the feet of liberals who appease and reward radicalized Muslims.

Whittle points out that increased immigration to France from Muslim countries led to no-go zones which became incubators for radical Islam. Instead of dealing with this problem, he continues, socialists rewarded immigrants with more sympathy and benefits.

Finally, Whittle asks why the West is responding to mass murder and terrorism with peace signs, a point which was also made recently by Stephen L. Miller of National Review.

Watch the whole thing below and please leave your thoughts in a comment.

If you watched the whole thing, you may have noticed that Whittle said Sweden has become the rape capital of the world. That wasn’t an exaggeration.

Sweden Opened Its Doors To Muslim Immigration, Today It’s The Rape Capital Of The West

As Europe confronts the social and financial realities of its largesse in opening its doors to millions of Muslim immigrants, it is time the tale of two countries is told.

The tale is an important one as the two countries involved have taken completely different approaches to Muslim immigration and the preservation of their own culture. As such, both provide examples of the proverbial canary in the coal mine on this matter.

Sweden began opening its doors to Muslim immigrants in the 1970s. Today it pays a high price for having done so. The group suffering the severest consequences of such an open door policy has been Swedish women.

As Muslim men immigrated to Sweden, they brought with them an Islamic culture sanctioning rape. It is a culture bad enough inherently in the treatment of its own women. Under sharia, Muslim women serve little more purpose beyond catering to their husbands’ sexual demands. A non-submissive wife runs the risk of being raped by her husband.

Funny how American “rape culture” activists never point that out.

For a large part of western failure to understand that unassimilated immigrant groups raise new generations of ‘activists’ extremely hostile to their host populations, we have to thank our oh-so-educated ‘news’ media.

By refusing to examine regularly the support of jihadism by sharia-compliant subgroups, media thinks it’s saving us from becoming badthinkers who might mistreat innocent minorities. By ignoring the increasing organization of hometown jihadis – and their support links with entire nations under authoritarian sharia rule – media does its best to keep us in ignorance of threats, and blindly continues in its 1960s groupthink that the natural state of the world is peace and love.

One can liken it to being an enabler of an alcoholic or drug addict.
Perhaps that’s what we need to do- label them “enablers” (would libs understand it even then?).
One would have thought, and what would have happened years ago, is these groups would have been shamed by any type of support. Yet today we have Harvard and Yale with sharia finance/law, Campbell’s soup going halal with INSA (terror supporters) doing the certification, judges bending to sharia, schools promoting islam.
We all need to speak up loudly, and often, to prevent further islamic encroachment and to shut down this enabling of sharia.

“The idea that poverty is a breeding ground for violence and terrorism derives, ultimately, from Karl Marx and, like most of his teachings, it sounds plausible enough until you stop to analyze it. Revolutionary violence, historically, has tended to occur, not at times of deprivation, but at times of rising wealth and aspiration. Put bluntly, people who are worried about where their next meal is coming from have little time for protest marches, let alone bomb-making.
The modern welfare state, by contrast, is the ideal terrorist habitat. It keeps people fed but idle. And, naturally, it makes them resent their paymasters.”

-Daniel Hannan, British MEP, The New Road to Serfdom, A Letter of Warning to America

The other problem is how tolerance breeds liberalism.

And how pacifism breeds unreasonable tolerance.

A very delicate balance, and one that can only be maintained by diligence at early stages of the development of our citizens. Imagine if we, as taxpayers, did’t tolerate leftists on college campuses, or in our public school systems early on? Or if we boycotted biased news organizations early on?

It now seems that only vigilance can overcome the dangers from pacifism. It’s going to take a lot of pain to get most people remain vigilant. That pain is coming.

Whittle, by the way, is brilliant. He’s also got a lot guts.

I wonder how much he pays his CPA every year to keep the IRS at bay.

Many years ago, I could walk across the center of Munich back to my lodgings at 11 p.m. and not be worried about my safety. That certainly wouldn’t be the case today. It used to be that if you dropped your wallet on the streets of Oslo, you’d have pretty close to a 100% chance of having it returned with all the cash in it. The odds would be very different today.

The main reason for these changes is the swelling Muslim populations. I saw a documentary about a blond Norwegian child who was compelled to change schools (and perhaps the family had to move) because of harassment by the Muslim children who had become the overwhelming majority. Surely he was not the only Norwegian child in that predicament.

1) The real no-go place was Moleenbeck near Brussels in Belguim. It may not be a no-go place any more.

2. It seems like, in many ways, Moslems occupy the place in European societies that blacks do in the United States, with substantial numbers of them becoming criminals.

There may be something about modern day liberal democracy that creates a criminal underclass where it is at all possible for such an underclass to exist.

Liberal democracy does not know what to do, or does the wrong thing, when the crime rate and juvenile delinquency starts to rise for any semi-random reason. The antibodies against crime are not strong enough. And this is worse when there is any ethnic element to the crime and disorder. This confuses some people.

Interestingly, a high crime rate seems to be confined mostly to one group at a given place and time, and not the same group everywhere. And also, a group, like black Jamaicans, may be associated with crime when moving to one place, like the United Kingdom, but not so associated when moving to another place, like the United States. The same exact origin!

3. Sharia finance and halal food are completely harmless, unless you think giving any kind of recognition to Islam is bad.

4. The rape problem is a completely separate problem from terrorism. There is no ideological justification for that in Islam.

However, scantily dressed women may possibly be perceived among Moslems as loose (and therefore it’s not such a bad thing to do, since they’re not virgins) or unprotected (with no family members to seek revenge.)

There is also a lot of rape in India.

Actually the administrative district is Sint-Jans-Molenbeek in Dutch or Molenbeek-Saint-Jean in French.

Nobody cares about Sharia Finance (other than the software companies that have to spend millions retro-fitting their software to make it work). It’s the aspects of Sharia Law that are incompatible with The Constitution that give pause. When people express concern about “Sharia” they’re referring to pesky little things like stoning homosexuals to death, cutting off the hands of accused thieves, “marrying” girls at the age of 10, etc.

And to say there is no ideological “justification” for rape under Islam is just crazy. http://www.npr.org/2015/08/13/432122595/new-york-times-islamic-state-uses-quran-to-justify-rape-of-yazidi-women