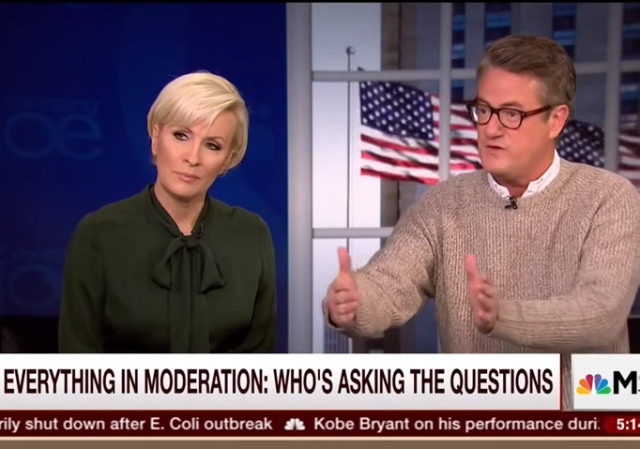 The CNBC debate has sparked a number of conversations on the very real issue of liberal bias in the media. As Professor Jacobson pointed out last night, this is an opportunity for Republicans.

When the issue is being discussed seriously on MSNBC, you know we’ve reached a turning point. Yesterday on Morning Joe, host Joe Scarborough challenged his panelists to answer a simple question.

Mark Finkelstein of NewsBusters has the story:

Scarborough: No Republican Has Hosted Network Sunday Show or Newscast in 50 Years

In the wake of the CNBC debate debacle, Joe Scarborough went on an epic rant on liberal media bias on today’s Morning Joe. He summed things up this way, in challenging the panel: “you can’t do it and nobody here can do it: name the single Republican that has hosted a Sunday show, that has been an anchor of a news network for the big three networks over the past 50 years: you can not do it.”

Mark Halperin largely agreed, saying “there’s huge liberal media bias.” But Mike Barnicle actually claimed that having fair moderators would be a bad thing for Republicans because they would lose their ability to run against the media.

JOE: — it’s okay, because you’re a Democrat and if you’re Tim Russert, it’s okay. All I am saying to you, and you can’t do it and nobody here can do it: name the single Republican that has hosted a Sunday show, that has been an anchor of a news network for the big three networks over the past 50 years: you can not do it! So we Republicans, what I’m explaining to you we’re told to sit back. —

JOE: Tony Snow, did he host, what, Fox News Sunday?

JOE: Fox News Sunday. I just said ABC, CBS, NBC, you can’t do it and nobody out there, no media critic can do it.

The Washington Free Beacon has a slightly longer video of the same segment.

Timothy P. Carney of the Washington Examiner recently made an excellent point on this topic as well:

Yes, liberal media bias is real, and here’s how it affected the CNBC debate

The New York Times, the Washington Post, CNN, NBC, CBS, ABC — the largest media outlets with the exception of Fox News — all slant clearly left. So do a vast majority of other major newspapers and magazines. I’m not talking about their opinion pages, but about their news operations.

I don’t think it’s deliberate, or that any collusion, deception, or bad intentions are at play, except in the rarest circumstances. I also think very highly of many of the journalists whose personal views are significantly to the Left of the American political center. Many of them do an excellent job of reporting the news fairly and trying to understand political viewpoints all around the spectrum.

But the vast majority of journalists at these major outlets are generally liberal, and this ends up slanting their coverage.

You have to love the fact that when pushed the media point to Fox News as a beacon of fairness and balance. The are so lacking in self awareness it is hysterically funny.

No, they point to Fox News as a right-wing outlet, not a “fair and balanced” one.

The reality is — at least with the local Fox News affiliates around here — that Fox is best described as “significantly less left” than the other three. Not “right-leaning” by any means, but not really “centered” or “moderate” either.

It’s “fairer and more balanced”, but only by comparison.

I think that is an astute comparison.

The idea behind Jim Crowe was to silence the a large part of the voice of one segment of the populace from being heard in the voting booth.

The voice of the populace that are republicans are being silenced from being heard in the big three networks newsrooms and have been for nearly 50 years because they won’t hire many republicans and give even fewer of those they do hire a position of prominence.

So, although it is not Jim Crowe, it is almost like Jim Crowe.

There may be some that are honestly trying to be fair, but leftists get swept away in emotional PC zeal and even blood lust.

Most are blatantly unfair, such as in agreeing to prearranged questions for Obama or Hillary. Or refusing to follow up on Benghazi lies, like when even low level conservative bloggers or commenters knew it as a lie and cover-up from the get go.

They are well-intentioned like a drunk wife abuser is well-intentioned the morning after. They refuse to stop serving the PC oligarchs, who will reward them with position, praise and power. They are addicted to that community, while the Judeo/Christian conservative remains principled in the face of such evil-intentioned adversity.

Traditional Christian America is anathema to the MSM establishment and their leftist (commie) globalist intentions. The journolist style coordination of Democrat talking points, between Dems and their MSM talking heads, is not just a “slant”, it is well planned propaganda.

The only reason it looks like only “slant”, is because that is how propaganda is done (as you lawyers surely know). The deception of Eve was a several step process, taking several “slants” to get from “thou shalt surely die”, to “thou shalt NOT surely die”. Any 180 “turn” is but a series of slants, all in one direction.

There are probably some useful idiots in the gang with Brian Williams, but most are willing to deliberately massage the story to push the leftist agenda. An appearance of journalism is only maintained for the purpose of duping the distracted audience, not out of any sense of purity. Leftism is their religion, journalism is their cover.

“I don’t think it’s deliberate, or that any collusion, deception, or bad intentions are at play.”

Really? The different networks, newspapers, etc. cover the same subjects with the same perspective and use the same words. They fail to report the same things. It is clearly deliberate and controlled. I think of the Central Committee of the old USSR where you promoted the narrative or wish you had.

Isn’t it frightening that today we consider reporting a “narrative” the same as “journalism” and “reporting the news” etc.?!

That shift happened long ago, but it never ceases to amaze that there is NOTHING anyone can do, since the 1st amendment’s “freedom of the press” is the only right in the Bill of Rights that is considered sacrosanct, untouchable, with NO consideration to whether these agencies are revealing state secrets up to the fact they report NOTHING about vital national and international events, or slant them toward a desired “narrative.”

They are not. The End.

“I don’t think it’s deliberate, or that any collusion, deception, or bad intentions are at play, except in the rarest circumstances.”

It seems that everybody has forgotten the “Journolist” scandal from 2007-2010: https://en.wikipedia.org/wiki/JournoList
“…a private Google Groups forum for discussing politics and the news media with 400 “left-leaning”[2] journalists, academics and others.”

Yes, the media did deliberately collude to shape the media message with the intent of painting the Republicans in a bad light and protecting one of their own. When it was exposed it was shut down, but there is evidence that it was resurrected under a different guise, the “Cabalist”.

Speaking of Republican candidates, a brand new poll is out this morning which measures ‘Trust.’

A poll of “Republicans”.

Who appear fully as gullible as Deemocrats.

I guess the fate of the nation hangs with us independents.

Who are not STOOOOOOOoooooopid, and gulled by Mr. Establishment, the American oligarch and snake-oil huckster.