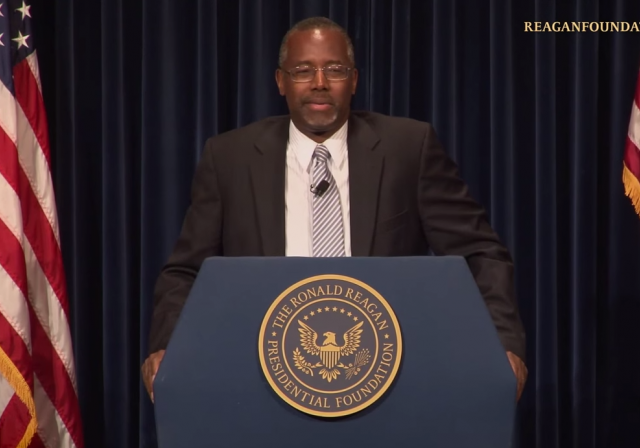 If you’ve been waiting for the first rap ad of the primary season, your wait is finally over.

Republican presidential frontrunner Dr. Ben Carson’s campaign released a rap ad that will run on stations in some of the country’s largest markets.

“America became a great nation early on not because it was flooded with politicians but because it was flooded with people who understood the value of personal responsibility, hard work, innovation and that’s what will get us on the right track now. I’m very hopeful that I’m not the only one that’s willing to pick up the baton to freedom. Because freedom is not free and we must fight for it every day. Every one of us must fight for us because we are fighting for our children and the next generation.”

According to ABC, Carson’s campaign says, “the purpose of the new ad is to awaken, appeal to and motivate the urban market, specifically catering to younger black voters.”

“Reaching them on a level they appreciate and follow and see if we can attract their consciousness about the election,” Carson campaign spokesman Doug Watts told ABC News. “They need to get involved and express their voice through their vote.”

Carson’s campaign is unconventional, but his unorthodoxy seems to be working. At least for now.

Anything that beats Marco Carly and the GOPe Amnesty Dwarfs is ok by me.

I am not so sure. Admittedly I am not a Carson supporter, but when I heard snippets of the add I was disappointed. He clearly does not want my vote. Tippycanoe and Tyler Too, now that was an song, if memory serves.

This is a personal plea from me to Dr. Carson – please confer with me before discussing ancient Egyptian archeology. http://www.huffingtonpost.com/entry/ben-carson-pyramids-grain-storage_563a7d2fe4b0307f2cabdf3e

Nobody cares what HuffPo is trying to turn into an issue. At least Carson isn’t saying they were built by little green men from Sirius sent by the Angry Carbon God, which puts him country mile ahead of most of the left’s Gaia and Wicca detachments.

“At least Carson isn’t saying they were built by little green men from Sirius sent by the Angry Carbon God, which puts him country mile ahead of most of the left’s Gaia and Wicca detachments.”

Thinking Egyptian pyramids were built to store grain is on par with little green men.

If a white candidate did a rap commercial, there would be hell to pay in the media. It would be racist, fer sher.

I’m sure Carson would be ok with it, though.

I find this odd. Dr. Carson is running in the Republican Primary. How many voters in Republican primary or caucus states vote for him simply because he is doing an outreach to the African American Community?

Is his campaign looking ahead to the general election and this is their way to get young urban black voters to support Dr. Carson?

Finally, I just don’t see Dr. Carson as a rapping kind of guy. He seems more jazz or Mozart.

I see no problem with it. Won’t hurt. Might help.

Can’t find anything recent so have to go back 20 years. Kind of like that rock on Perry’s ranch from eons ago. Or Romney carrying his dog on top of his car 30 years ago. Media is always picking through old shit looking for maggots. We never see these kind of stories about Democrats. Why? Hillary is playing with our national security and we’re talking about friggin’ pyramids.

Next, will Ted Cruz do a Mariachi band outreach to Hispanics? Give me a break, Ben.

I suspect there are a lot of minority folks who are as sick and tired of racial politics as I am, and who would prefer a frank discussion of the issues, especially the institutional race-hustling that’s promised them everything and delivered only dependence.

At least, though, Ben will give us transgender bathrooms if he gets in the White House. Maybe NASA could do that instead of Muslim outreach.

Trump will do better with blacks simply by staying strong in opposition to illegal immigration.

Racial Identity politics is the Democrats game. We ought to be better than that.

Oh, and people just LOVE being pandered to. Doesn’t insult them, or piss them off, at all.

Oh, and people just LOVE being pandered to. Doesn’t insult them, or piss them off, at all.

It’s OK as long as pandering doesn’t interrupt the flow of gimmedats.

Ben Carson, is just trying to reach all levels of Society. Many Young people Never listen to any news stations. This is just a way to reach them. We have had enough of the Racial Politics. these different approaches to a Campaign is not restricted to a certain Party. There should be a Law against all of the LYING going on in Campaigns. I think there are too many new laws that this Admin. has slipped into being on us. We must be careful not to over do the Law making.

The ad is good politics. For better or worse, a significant number of African-American voters will enter a voting booth, check the color of their skin, see if it matches that of the candidate and, if it does, vote accordingly.

It surely doesn’t hurt Carson’s campaign to remind everyone that with just a modicum of effort he could expect to get >80% of that vote if he’s nominated.

And where would a counter-campaign go to counter this, into the gutter of accusing him of being “inauthentic”?

Unless he promises lots of free stuff, he ain’t getting that group of voters