When is a VAT not a VAT? 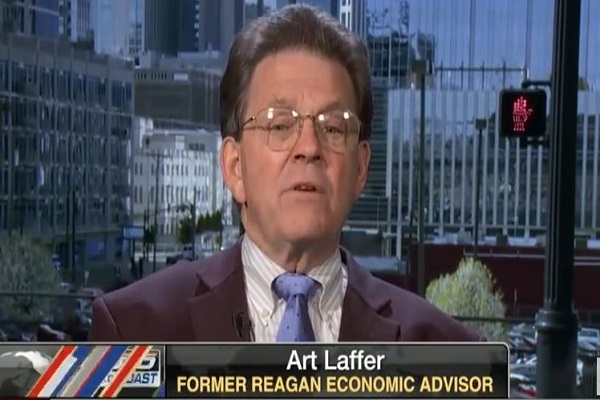 Art Laffer, famed member of President Reagan’s Economic Policy Advisory Board, has co-authored, with Stephen Moore, an article for Investor’s Business Daily in which they assert that Rand Paul and Ted Cruz have the “best” tax proposals.

They begin with a bit of a warning to those serious about tax reform:

All the GOP tax plans look good to us — though some are admittedly better than others. The danger now is that too many conservatives have formed a circular firing squad and are shooting down nearly all proposals on purity grounds or attacking trivial differences.

This is the surest way to derail tax reform altogether.

If Ronald Reagan, Jack Kemp and Bill Bradley had held to such a “my way or the highway” approach, the epic 1986 tax reform that collapsed tax rates to 15% and 28% never would have happened.

That said, Laffer and Moore continue by narrowing their focus to Rand and Cruz:

Which brings us to Rand Paul and Ted Cruz. The two of us helped craft their low-rate flat tax plans.

These would be the lowest tax rates since the income tax was devised 100 years ago. Both are estimated by the Tax Foundation to grow the economy by a gigantic $2 trillion in extra GDP per year after 10 years.

Both eliminate almost all deductions and special-interest carve-outs. (Against our wishes, they retain the tax write-off for charitable organizations and have family deductions that are too big. But no one’s perfect.)

They completely kill the corporate tax, the estate tax and the FICA payroll tax.

One of the “circular firing squad” arguments to which Laffer and Moore refer is the accusation that Cruz and Rand are proposing a VAT (value-added tax).

Cruz and Paul propose to rip up the current tax code and replace it with individual income taxes at low, flat rates — Cruz at 10 percent and Paul at 14.5 percent. Their plans would repeal the estate tax and corporate income taxes, while reducing the overall tax load. So far, so good.

But then we come to the VAT, which the candidates hide behind innocuous names — “business flat tax” for Cruz and “business transfer tax” for Paul. Actually, Paul’s title is accurate, because these taxes would “transfer” trillions of dollars into government coffers unseen by most citizens.

The tab for taxes collected from businesses is ultimately passed through to individuals in the form of lower wages, reduced dividends, or higher prices. So for transparency, the best thing would be to scrap business taxes altogether, and collect the full tax load from individuals at a flat rate. That way, people could accurately perceive the full cost of government.

It is true that the VATs proposed by Cruz and Paul have modest rates — 16 and 14.5 percent, respectively. The problem is not the rates, but the tax bases. VATs have huge bases. That’s because — unlike income taxes — they do not allow businesses to deduct employee compensation when calculating the taxable amount. So both labor income and capital income are taxed at the business level under VATs.

The result would be that tax revenues from businesses under the Cruz and Paul VATs would be enormous. While the plans would abolish the corporate income tax (CIT), the new VATs would have corporate tax bases at least four times larger than the CIT. So every rate increase in the VAT that future politicians might push would raise vastly more than the same rate increase on current business income taxes.

However, according to Laffer and Moore, neither Rand nor Cruz is proposing a European-style VAT “add-on.”

Economists at the Cato Institute have joined with Larry Kudlow to complain that the business tax is a value-added tax (VAT). Such a dreaded tax, they fear, would be a giant new source of revenue and lead to government gone wild, as has happened in Europe.

That’s the last thing we want.

But nearly all leading flat-tax plans have some form of VAT to replace the god-awful corporate income tax. If these plans didn’t eliminate the corporate tax entirely, and the new tax was a European-style add-on VAT, we’d be standing shoulder-to-shoulder with Kudlow in denouncing them.

You can read about Rand’s tax plan here and about Cruz’s here.

A good start to tax reform would be to stop calling any tax a Value-added tax (VAT). There is no VALUE to it except for politicians who live well off the public dime already.

I’m not sure how you abolish the IRS while maintaining an income tax.

I don’t like these Cruz / Paul tax plans. There problem is that they are trying to have a national sales tax but do it in a way so that it is not an obvious add on at the register/invoice level to the retail customer. The tax is implemebted on “net sales” (based on the article it appears net sales is gross sales price less the purchase cost paid to suppliers upon which the suppliers paid sales tax) No deductions from gross sales price for labor, salaries and administrative costs, etc. are allowed in calculating “net sales”. In effect it is a 16% (or 14.5%) national gross sales tax, but with the gross sales tax that is included in the final price being hidden from the final retail customer in the chain of producers/resellers who each collect and pay portions of this national gross sales tax.

There are lots of things wrong with both these plans.

1. Most scarry of all is that once implemented there is no guarantee that the government won’t later reimpose an incone tax on businesses on top of this overly complex national gross sales tax scheme.

2. The way this tax is computed it will cause false incentives and inequities on the effective tax rates of service businesses versus manufacturers and merchant resellers of goods.

These pkans should NEVER be implemented in their propised form.

Far better if seeking to go this way would be how Neil Boortz’s fair tax is structured. It is far simpler because it is a straight forward national sales tax. It is therefore much more transparent plus it is designed to never go into effect until the incone tax amendment is repealed so that there could never be an income tax added back on top of the national sales tax.

I would further suggest that we learn from oadt mistakes where the incone tax amendnebt didn’t specify a naximum tax rate that a constitutional amendment soecifying a maximum rate for the national sales tax be passed.

Finally, since the odds of ever getting the necessary amendments to the constitution passed are ZERO, then these tax plans of both Cruz and Paul VERY dangerous and titally unacceptable.

The plans from Trump and possibly others are far better because they are doable and don’t require protective constitutional amendments to be “safe”.

No tax plan from Trump is acceptable to me. trump is not trustworthy. He is going to be endorsed by 100 black pastors from Ohio on Monday. Their leader, is a Democrat who admits he voted for Obama, who likes Trumps take on the economy!

Darrell Scott, the pastor of the New Spirit Revival Center in Ohio, helped organize the coalition of religious leaders and said that after meeting Mr. Trump in person he was convinced that Mr. Trump was the candidate best suited to be president. He also said that the public portrayals of Mr. Trump as a racist and demagogue seemed unfounded after they spoke.

“I was looking for some subtle hints of racism,” Mr. Scott said. “I didn’t see it at all.”

Mr. Scott, who said he was a registered Democrat who had voted for President Obama, said that he had been impressed by Mr. Trump as a leader and that he liked his ideas for improving the economy. He said that when he closed his eyes and listened to all the candidates, he found Mr. Trump to be the most appealing.

Go find 100 black pasters that voted for Romney and then get back to me. Your entire post just makes no sense. You object to the fact that trump pulls votes from Reagan democrats and blacks and is theref8re better able to win the geberal election against Hillary. Makes no sense.

You don’t like Trump that is your right, but if you want to persuade others you need to offer something a lot more logical than the complaint that Trump has managed to show some black pastors that Obama and democrat economic policies have been horrible for the black community.

Are Republicans going to introduce the VAT (value added tax) just as they introduced us to the EPA, OSHA, Hawley-Smoot tariff, NASA, DHEW, and many other big government programs? Probably.

Once big government gets their hands on the VAT, Katy bar the door.