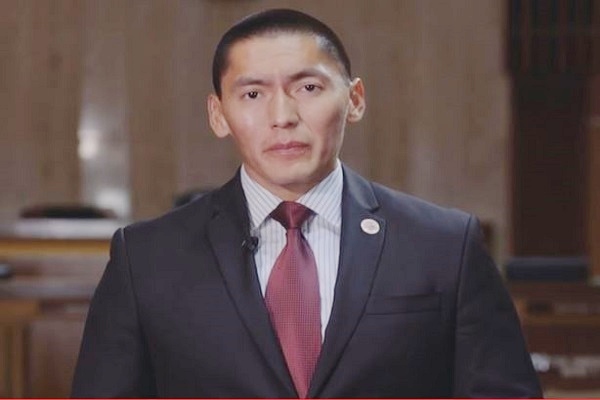 An Arizona state senator has jumped off the Democrat bandwagon and joined the Republican party.

Citing the values of self-determination and self-empowerment, Carlyle Begay announced his decision earlier this week.

Carlyle Begay, a Democrat who was often viewed as the state Senate’s 18th Republican, officially joined the GOP Monday.

The announcement, attended by a bevy of Republican elected officials, surprised no one and makes no substantive change to the power dynamics in the Arizona Legislature.

But it does give the GOP bragging rights and a chance to make a run at winning over Native American voters in next year’s elections.

Begay, a Navajo from Ganado, told The Arizona Republic that the Republican Party better reflects the values of self-determination and self-empowerment that he holds and wants to emphasize to his district, which includes the Navajo and Hopi reservations.

Begay’s message of self-determination and -empowerment is a sharp rebuke of Democrats’ identity politics and big government “solutions.”

“I want to help the Republican Party build a bridge with those who need and want a chance with those who can provide that chance,” Begay told reporters at a packed news conference attended by U.S. senators John McCain and Jeff Flake, GOP Chairman Robert Graham, Senate President Andy Biggs and more than half of the GOP Senate caucus.  His main job, Begay said, is to provide a voice for tribal communities and rural areas “but not through the lens of a political ideology.” He said he votes based on what he thinks is best for his constituents, leaving aside party labels.

Look for more DemocRATs to jump ship as the campaign season blossoms in the following year. They can see the writing on the wall of a totally failed party.

It really depends on what kind of Republican he’s going to be: A McConnell or a Cruz.

Here is the difference – I want the mcconells and the cruzs – i want a large republican party, and that includes the squishes at the margin – i don’t want an ideologically pure rump minority party.

Right now we have a one-party system in DC. McConnell and Boehner going along with Obama. And Paul Ryan will give us the shaft too. I’m with Cruz: take your oath seriously and work for the people. If you’re a Republican, help someone like Cruz with Obamacare instead of helping Obama. Is that asking for so much?

In other words, my fifty percent friend is better thwn my eithty percent enemy.

Any time an elected official switches parties, they must resign their office as they are selling out the folks that contributed time and money to elect them.

If they have truly seen the light, then have the balls to stand for election in their new party.

Suddenly this comes up for a person who switches from Democrat to Repub. How ’bout that?

Anything to reduce the number of Repubs.

I took one look at that man’s face and wondered if he were hispanic or Indian. Good.

This phrase “better reflects the values of self-determination and self-empowerment” says it all for me, too. Repubs at the national level would do well to listen to this man and whoever recruited him. This is the big appeal of the party, and I strongly suspect that we have too many people at the national level who have no faith in it.

The nasty, divisive, and recent rewrite of the concept of Thanksgiving has given me pause to think about what else is under attack. In retrospect, I don’t think the story of Thanksgiving as I was taught as a child was a lie. Some of the early colonists had a struggle to survive, and the locals helped them out. The first feast after a decent harvest was joyous occasion, and of course they invited their neighbors. Nobody hid the fact that there was subsequent conflict. Rather, they asked whether we, with effort and better forethought, could conduct ourselves in a manner to get similar good results in the future.

Now, we have this nasty, perverse, and constant shaming of all things white, regardless of the very real, shining moments in our history.

The thing I like best about the Republicans is that they respect normal adults as intelligent beings capable of ordering their own lives and making their own decisions. They are at their best when they deal with economic issues. The Democrats, whether they intend to or not, are far too busy teaching learned helplessness.

Copied from another site by a response to a post.

Everybody wants to be a democrat until it’s time to suffer under the oppression of incompetent democrat overlords.