Erdogan warns Putin not to “play with fire” 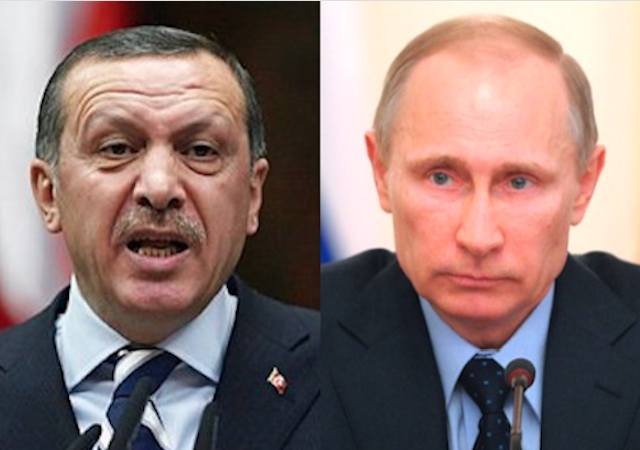 Yesterday, Russian President Vladimir Putin signed a decree imposing sanctions against Turkey in retaliation over last week’s downing of a Russian jet that crossed into Turkish airspace near the Syrian border.

The decree went into effect immediately, and places a stranglehold both on Turkish businesses operating in Russia and on Russians who planned on traveling to or doing business with Turkey.

The decree, posted on the Kremlin’s website, spoke of the need to protect Russia’s national security and Russian citizens “from criminal and other illegal activities”.

In it, Putin ordered the government to prepare a list of goods, firms and jobs that would be affected. Some of the measures announced have already been informally introduced.

The government is expected to publish the list of banned imports on Monday, Interfax news agency reported, citing a government source. The list is likely to include food and some other products, a second government source said.

Turkey mainly sells food, agricultural products and textiles to Moscow and is also one of the most popular holiday destinations for Russians. Peskov, Putin’s spokesman, said he thought up to 200,000 Turkish citizens could be on Russian soil.

Putin signed the decree days before a climate change summit in Paris.

The end of last week was marred by tension as the two leaders publicly traded barbs over the downed jet. Erdogan warned Putin not to “play with fire,” but he also expressed a desire to meet with him at this week’s UN climate conference. Putin, however, had demanded that Erdogan apologize for the incident—a demand that Erdogan has rejected.

On Thursday, Putin again slammed Turkey’s explanations for the shoot down near the border with Syria, saying that the warplane’s flight details had been passed to the U.S. in advance and should have been known to the Turkish government.

“The American side, which leads the coalition that Turkey belongs to, knew about the location and time of our planes’ flights, and we were hit exactly there and at that time,” Putin said during a news conference with French President Francois Hollande, during which the two leaders vowed to increase cooperation in the fight against ISIS.

“Why did we pass this information to the Americans?” Putin went on to say. “Either they were not controlling what their allies were doing, or they are leaking this information all over the place.”
…
Also on Thursday, Erdogan underscored the complex military landscape in Syria, where a sprawling cast of countries and rebel groups are engaged on the battlefield and in the skies overhead, sometimes with minimal coordination.

He accused Russia of using its declared goal to fight ISIS group in Syria as a pretext to target opposition groups including the Turkmen, in order to shore up Syrian President Bashar Assad.

He also challenged Russia to prove its accusation that Turkey is buying oil and gas from ISIS, calling the claims “shameful” and even pledging to step down if the claim is proven.

“This is a great disrespect to Turkey and those who make the claims are slanderers,” he said. “If they prove it, Tayyip Erdogan would step down.”

I wrote about Turkey’s history of playing nice with ISIS in October of last year—you can read it here. (Lest we allow one madman to claim moral high ground over the other.)

This situation is still developing. Early this morning, Turkish officials announced that they had recovered the body of the Russian pilot killed when the jet was shot down—the other is reportedly safe on a Russian air base in Syria—and were making preparations to return him to the Russians.

Putin is serious. Erdogan is terrified, now, of being eaten by the bear.

I disagree. Erdogan is a deluded Muslim fanatic, and he is perfectly capable of instigating a major power war. Another shootdown or worse a direct attack on the Russia base in Latakia is a (small) possiblity. And with that we would face WWIII.

The provocations of the extreme rightwing parties in Ukraine are contributing to the situation. Russia is also reacting to the power, water and food embargoes on Crimea with its own embargoes. Poroschenko has lost control of the situation in Ukraine, and the extremists may yet provoke a Russian invasion.

Downed jet… and rescue helicopter, and the murder of several Russia citizens. All under cover of an American umbrella a la Benghazi or American-backed coup a la Ukraine.

Where can we find such a leader?

I read a comment elsewhere (different site) that America has come to quite a state when it had people who admire Putin more than their own president.

Putin is a ruthless, dangerous man. But, he is also a man who loves his country, loves his country’s people. Obama does neither, and it is evident with virtually everything he does or says.

Perhaps a ruthless, dangerous man, but one who has exhibited extraordinary patience and moderation in the face of progressive threats to himself, his people, and nation. Fortunately, he is not morally insane. He is not even pro-choice.

If nothing, Putin is a leader.

We, on the other hand, have a teleprompter-reading, nose-picking fraudulent and dangerous clown.

Putin destroying Turkey’s allies in Syria. (That’s according to debka.com. Not the best source.)

I’ll be looking for JE Dyer’s take over on libertyunyeilding.com. Here’s what she’s said so far.

In any conflict between Muslims and …., “I will side with ththe Muslims.”—Barack Hussein Obama.

America: get your heads out of your asses.

Let’s hope there is a way they can both lose.