Is a block a legislative win? 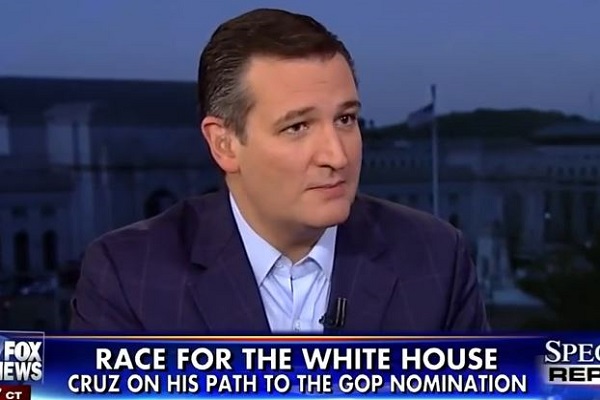 In the 48 hours immediately following the GOP debate, Ted Cruz’s presidential campaign raised over a million dollars.  His performance during the debate included some significant comments directed at the moderators that resulted in the highest score pollster Frank Luntz has seen in his career conducting debate focus groups.

Sen. Ted Cruz (R-Texas) had arguably the most memorable moment from Wednesday night’s Republican primary debate on CNBC when he slammed the moderators.

But for Frank Luntz, the veteran GOP pollster who ran a focus group during the debate, the results were clear.

“I have been doing this since 1996 and tonight is a special moment. I’ve never tested — in any primary debate — a line that scored as well as this,” Luntz said after the debate on Fox News’ “The Kelly File.” 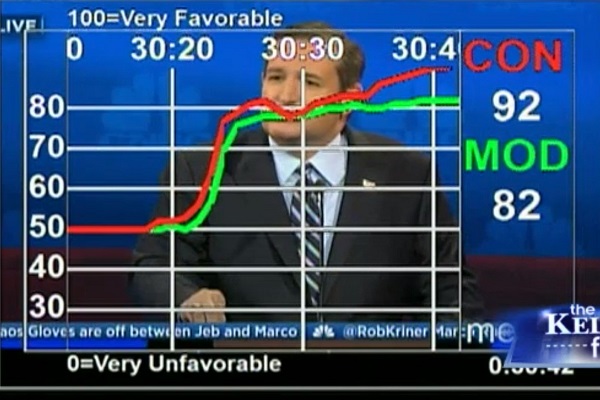 The line in question:

“Let me say something at the outset: The questions that have been asked so far in this debate illustrate why the American people don’t trust the media,” Cruz said.

He then did a retelling of some of the moderators’ questions to the various candidates on stage.

“This is not a cage match,” he declared. “And you look at the questions: ‘Donald Trump, are you a comic-book villain? Ben Carson, can you do math? John Kasich, will you insult two people over here? Marco Rubio, why don’t you resign? Jeb Bush, why have your numbers fallen?’ How about talking about the substantive issues people care about!”

With such a successful debate, Cruz is now facing increased scrutiny about one issue that is important to Republican primary voters:  his accomplishments in the Senate (or to some, the lack thereof).

He begins his answer by noting that he “ain’t your guy” if you want someone who is fine with the status quo in Washington and will “go along to get along.”

Baier notes that Cruz has led fights against ObamaCare, Obama’s executive amnesty, and the EPA, yet these things are still around.  Cruz quickly points out that he led the fight against the Schumer, Rubio, et al.’s Gang of Eight and, standing alongside Jeff Sessions, effectively stopped amnesty.  Baier responds, “so a block is a legislative win?”

Cruz goes on to note that he was instrumental in blocking gun control legislation after the Sandy Hook shooting, and he points out that he successfully fought against Obama’s move to ban all flights to Israel by pointing out that this would effectively be an economic boycott.

Asked how he can work with Congress given that he is seen as a divisive figure in Washington, Cruz points out that anyone who is not divisive has never stood against the status quo in Washington:  “that’s how  you are not divisive, you don’t ever take principled stands on anything.”

He then goes on to note that President Reagan was initially loathed by the GOP establishment because he primaried Gerald Ford in 1976.  Indeed, Reagan refused establishment GOP appeals to drop out in order to “unite the party.”   Reagan, Cruz says, changed Congress and changed Washington because he “took his case to the American people,” a strategy that Cruz adopted early on.

You can watch the entire interview here.

It remains to be seen whether or not Republican primary voters will think that blocking bad legislation is an accomplishment or if they believe that he can amass the type of grassroots support that made Reagan such an effective leader, but if his fundraising and rising poll numbers are any indication, it would seem that many already do.

Cruz’s line in last week’s debate comes real close to Reagan’s “I paid for this microphone” off the cuff remark.

“Is a block a legislative win?”

In this Congress that can be the biggest win of them all.

LIMITING GOVERNMENT is a win in the cause of limited government.

Freedom is its own reward.

The constitution was DESIGNED to cause conflict by way of checks and balances and separation of powers.

Cruz did superbly in that interview, just as he did in the debate. And yes, stopping something bad means an avoidance of negative utility, as economists would say. That means we are better off at the end of the day. A doctor may not be able to create a healthy heart in a patient, but he can reduce the risk of heart attack in the near term.

As President, Cruz would have vastly more powerful tools, and not only because he would no longer have to deal with the likes of Barky.

Blocking destructive legislation from establishment republicans and progressives is a far greater accomplishment than voting for that legislation in the name of party unity.

“Is a block a legislative win?”

Ask yourself if ObamaDoggle had been successfully blocked.

You FLUCKING damn betcha it would be a “win”…!!!

My boy Ted can block LOTS more, and I’ll consider him a winnah!

In that it is far easier and far more common to write and propose bad bills than good ones, not only does a block constitute a legislative win, blocks are categorically better than passes.

Henry, my only concern with Cruz is his likeability. However, I think he’s getting more personable over time. And, I think he really is a decent, honorable fellow. He needn’t lie, in other words, to project a more compelling persona. One thing we can be sure about is tha conservatives would vote in the general election if he were the nominee.

I know I’ll vote for him in the primary.

“…a block is a legislative win?”

Where does Fox get these idiots.

Republicans, in the last two elections, were given a mandate to STOP OBAMA and the left from degrading the country and the Constitution. The GOPe completely corrupted this into a mandate to “govern”, i.e. to clear the path for Obama to continue his disastrous policies and even expand his power through Obamatrade and other acts of cowardice.

The fact that Baer doesn’t even seem to understand the concept is a testament to the ignorance and lack of political sophistication even of Fox.

We indeed have a long tough row to hoe, and I am personally grateful to the Creator that we have patriots like Cruz and Sessions to stop the growth of the left and weedwhack their foul crops into silage.

Compare to Boehner, may he rot in hell.

– Mr Mayor, what did the fire brigade achieve this year?
– Well, there are a lot of houses that didn’t burn down because of us, and a lot of people who didn’t end up in the burn unit because of us.
– So a block is a win?

Did you watch and listen to the entire video?! In the first 22 HOURS he raised over $1 million dollars!! Here is the link to the entire Bret Baier interview, via The Right Scoop, which also contains the clip you imbed, above. (Note: the third video imbed is the entire interview. Watch it, around the 10:56 mark, for the “22 hours” quote.)

And, yes, the things he listed were ALL wins.

Ted Cruz is the ONLY candidate who leads, who fights, and says and does what he promises, based on principle. He is not perfect; no one is. However, he is a statesman, a solid Conservative, a brilliant and principled Christian man who loves the United States and stands for truth. Bret Baier is a moderate squish, at best, and he FAILED to take down Ted Cruz, the closest thing to Ronald Reagan this nation has seen in a LONG, LONG time! You can see it in his face how frustrated he is that he can’t topple, can’t even come close to shaking Ted Cruz.

He would CRUSH anyone in a debate. Any and all Republican candidates, bar none – he’s a Harvard Law trained expert at it! Even better, he would DESTROY Hillary, and she wouldn’t even see it coming, he would finesse it so well.

Yeah. He’s had several victories, but the press and establishment RINOs don’t want you to think so……because Ted Cruz is the one they fear. With good reason.

It remains to be seen whether or not Republican primary voters will think that blocking bad legislation is an accomplishment or if they believe that he can amass the type of grassroots support that made Reagan such an effective leader, but if his fundraising and rising poll numbers are any indication, it would seem that many already do.

Really?!?! Once again, did you watch the ENTIRE VIDEO INTERVIEW?! He clearly tells Baier that he has amassed a massive grassroots effort all over the entire country, over 77,000 strong!

There is no way to know yet if he will win in the primary; however, given the massive support of volunteers and monetary donations, I believe we can safely say his is getting that very strong, real, grassroots support.

Slightly off topic, but it appears that Ted Cruz also is a Princess Bride aficionado . What more could you want?!?! 😎

This post along with the let’s make Rubio attractive to the young voters, is telling.

The Rubio Worship Post was a gift that keeps on giving… 🙂
—-
Hubba hubba! Amnesty heartthrob Marco-Mark Rubio ROARS into a lead over Rand Paul in Breitbart online poll, 4% to 2%. No surprise to those following our Tiger Beat Edition, which recently observed that Rubio, “… had the breakout performance he needed … he’s capable of reeling in the support needed to cross the finish line.”
(Protip: ‘Breakout’ does not reference youthful acne in this case.)

And not just because he’s young!!! Grab the smelling salts, he’s headed for 5%!

According to reports, one can speculate that Rubio is not re-electable as a Senator b/c of his Senate record, thus running for president is a political hail Mary pass that Jeb is blocking. RINO hedge-betters are freaking.

While I am at it, isn’t it interesting LI ‘questions’ 1st term Sen Cruz’s accomplishments in the Senate on one hand and plumps up 1st term Sen Rubio with the other hand?

Uh… I suggest some introspection here…

Is a defensive block an accomplishment?

Perhaps Fuzzy should ask the Natl Football League about the accomplishments of blockers in the game playing defense, eh?

Ask Rubio how his Senate team, the gang of eight, made out, k?

I have no idea what you are asking or why. Where do I say, or even imply, that I support Rubio? Because wherever that is, I want to go and correct the record immediately. 😛