A Ted Cruz moment for me

A Ted Cruz moment for me

The confidence to engage rather than avoid. 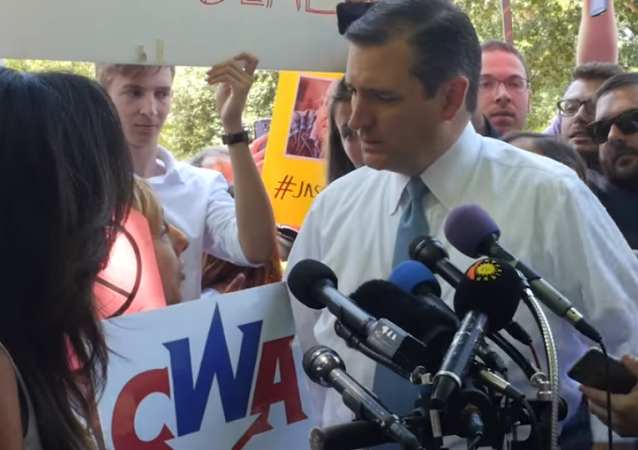 This video has been around since July.  I had heard about it, but never watched it. I’m not sure how, but I stumbled upon it last night.

In the video, Ted Cruz’s rally opposing the Iran nuclear deal was interrupted by Medea Benjamin and other Code Pink protesters.

But instead, he engaged. That’s what was important to me. The confidence to engage rather than avoid. Standing face to face with hostile protesters was very Andrew Breitbart-like.

When you watch this video, forget who won the argument, but focus on Cruz’s willingness to debate the leader of Code Pink, someone used to grabbing the spotlight. Cruz reduced Benjamin to a sideshow rather than center stage. It’s almost as if she was not there.

For me, watching it was a Ted Cruz moment.

I met Medea Benjamin once. During testimony on Capitol Hill she approached me as we had a display of military clothing and body armor. She walked up to me displaying the peace sign with her fingers and called me a war monger- merchant of death. I said I have 4 combat tours and you have freedom of speech. I held out my hand to shake her hand ans said “Thank Me”. She reacted as if I had a rattle snake in my hand

If she won’t say it, I most certainly will … THANK YOU!

It’s a demonstration of political leadership in the fray of politics. It expresses confidence, reason, political skill and vision. It’s chiefly why I’ve supported Cruz for some time. The media narrative that he’s “mean” or the related GOPe narrative that he can’t win because he’s “divisive” are the sort of cheap and frightened lies one would expect from these camps when confronted with someone unique like Cruz. Cruz is one of the rare politicians who can excel both as a national party nominee and as a nation’s political leader.

After witnessing the BLM movement and the other nonfree speech advocates, Cruz is wasting his time. They simply do not respect his offer to allow them to speak at HIS rally! When it was his turn to speak he was interrupted constantly. When he tried to get an intelligent response to the billions of dollars to Iran that would go to jihad, he was told it was not true with no offer of proof to that statement. Just like the white college students of today they simply are so spoiled that an offer of equanimity is rejected out of hand. It did show the intellect of Cruz and his self confidence that he has the answers that we need. Notice he did not resort to name calling or condescension?

You’re right — they don’t respect him or his offer. But it’s still important that he did what he did.

It doesn’t matter if he didn’t change their minds. What matters is how he handled them. I watched it after it happened in July, and when the rally was over, Cruz was walking with one of the members and they were talking. To me, it looked like he had respect for Cruz.

Cruz is shrewd enough to know that he is not wasting his time when his message is to the masses and not to the twisted non logic of code pink.

In letting them rant on, he showed them to be the loons they are: fascists for peace – of the like who had power in Stalin’s Russia.

These people running these movements are nuts and the people following them are dangerously ignorant.

There’s no compromise here. We just need to win.

Talk about nuts, liberal republicans promise to support Hillary Clinton if Trump gets the nomination:

Seated around the table in the private dining room of the Hotel Bel-Air were several of the West Coast’s most powerful Republican donors, including Ronald Spogli, the venture capitalist and former ambassador to Italy under President George W. Bush; his business partner Bradford Freeman; and Riordan.

A story that circulated after the lunch was that the donors engaged in a hypothetical question: “If it was Donald Trump running against Hillary Clinton, who would you vote for?”

One version has it that most of the Republicans at the table put their hands up for Clinton.

Substitute Cruz for trump and the result would be the same.

I hadn’t seen this video before today.

If there were a video of Hillary patiently engaging opponents trying to crash one of her rallies like this, you could bet the media would make sure it was the story of the year.

But Hillary doing such is completely unimaginable.

Cruz did it effortlessly.

I can easily imagine Rubio, Fiorina, Jindal, Christie, and any number of GOP candidates and former candidates pulling this off as well.

Ours is truly the side of free speech and civil debate.

IMO none of those candidates could have pulled it off like Cruz. I could just see Christie yelling and telling them to go to hell.

“I can easily imagine Rubio, Fiorina, Jindal, Christie, and any number of GOP candidates and former candidates pulling this off as well.”

I can’t — not with Cruz’s confident riffing ease. Fiorina tried once when confronted by a PP advocate and managed only a pinched civility. Christie, not a chance. Nor Jindal. Rubio would do his best to avoid it, I think, but if trapped, might turn in a decent response. But not with any relish.

Cruz showing that he can be Presidential and can debate and win with logic and civility. With his intelligence, honesty and dedication to the Constitution, Cruz is the best choice for President.

Hillary Clinton couldn’t handle it intellectually. Nor could Obama.

On your point, I believe that if Cruz had been a sitting senator and the nominee in 2012, he would have been elected instead of Obama. Trump and Rubio could take it to Mrs. Clinton, too, but neither would as effectively as Cruz.

This is the type of reason why so many Americans are fed up with the politics as usual crowd. Sen. Cruz did not insult with a pithy statement like president TelePrompTer or threaten legal action like Queen Hillary. In fact, Sen. Cruz did not whine and cry like what we see on so many university campuses across this country because he was offended by someone hurting his feelings. No, he had a discourse. This is probably why many people like Trump as well. He says it and goes on. If it was JEB! (Who by the way is now sending out mailers to we Floridians from his PAC in Los Angeles. His mailer talks about how he wants to “Destroy Isis” and how he is “Endorsed by 12 Congressional Medal of Honor Recipients” and we need to vote for him because he has a plan.) it would be more of the low energy talk about his “esteemed colleague” and other such nonsense. I believe we are at a tipping point in this country that maybe, just maybe enough voters realize that the experiment has failed miserably and it is time to put someone in the White House that has leadership qualities and not cheap slogans and also who won’t bow down. I, like many voters are undecided here in Florida and across the nation but at least know who we won’t vote for and why.

Good one Professor. I tweeted that Cruz video right after it became available earlier this year. It is indeed Breitbart-esque.

I’ve also tweeted other such Cruz exchanges such as with Sen Feinstein on the topic of her 2013 gun control bill here:

In my view, either Cruz or Trump, or a shared ticket, is the right path going forward.

Many critics of Trump cite opposition on the grounds he is not politically correct.

Most, if not all, of his supporters cite their support strengthens because he is not politically correct.

To be, or not to be, that is the question:
Whether ’tis nobler in the mind to suffer
The slings and arrows of outrageous fortune
Or to take arms against a sea of troubles,
And by opposing end them.

Trump signaled yesterday during his Sarasota Florida rally that he is now efforting a ‘nicer’ tone.

If that holds true, what then?

I have consistently maintained Sen Cruz is a gifted Blue Ribbon Statesman, perhaps even on the level of the framers of the US Constitution.

Trump is a no BS achiever with an enormously successful track record.

It it too much to ask for both?

When Trump fans claim that Trump’s mockery of other people’s physical imperfections is equivalent to poking fun at Trump’s choice of a surfer-dude hairstyle, that’s BS.

When Trump and his acolytes paint his rudeness and vulgarity as a courageous “anti-PC” stance, that’s BS.

As for whether it was BS when Trump said that Hillary Clinton would make a terrific president, I can’t say.

We all know you oppose Trump.

I don’t care if he did mock that Liberal SOB.

I’m sure most, if not every, sincere supporter of Trump also could give a fig less what you have to say or think about them.

I dead agree with you on the ticket. Mrs. Clinton is an unbelievably flawed and unsuccessful candidate and either Cruz and Trump, or both, will tell America.

George Bush was always so painful to watch because he was so bad at what Ted Cruz is so brilliant at. More importantly than his eloquent and relentlessly logical expression of morality is his obvious passion for a just cause, whichever that happens to be under discussion. The end point of this video reminds me of something said about Jesus in Matthew 22:46; “And no one was able to answer him a word, nor did anyone dare from that day on to ask him another question.”

The reason Ms. Benjamin and her loony friends let Sen. Cruz talk at all and not “act out” was that Cruz actually listened to them and let them speak without losing control of the situation for a second. That’s not easy to do. If you’re seen as a bs’r they’ll tear you to shreds, verbally. He, obviously believes what he says and has led attempts by both the Congress and the administration to subvert the Constitution. He is the only one of those running who has done it and not simply talked about it. He’s been a regular “pain in the ass” to the Republican Leadership and to the crazy umm…Administration. I can’t thank him enough for that. Thank you, Texas, we owe you.

He, obviously believes what he says and has pushed back against attempts by both the Congress and the administration to subvert the Constitution.” That’s how that should have read.

Welcome to the club, Professor Jacobson. I guess that you did not know, but the reason Senator Cruz engages so well is that he was the U.S. debating champion in his senior year at Princeton.