As it turns out, Yelp has a sense of humor 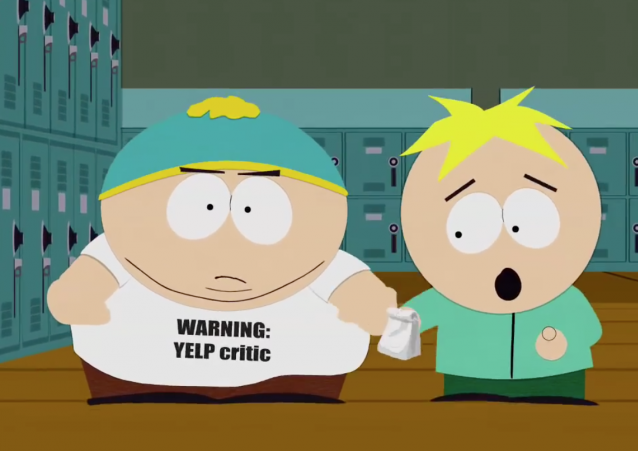 We are happy to report that Yelp is not suing Comedy Central or the creators of South Park.

Headlines to the contrary are yet another case of Parody Taken Seriously.

This clip from the episode, which like most things South Park, is probably NSFW:

A hilariously and somewhat convincing parody article published by NBC.com.co indicated Yelp was filing suit, and could obtain up to $10 million in damages.

The episode, which aired last week, is titled “You’re Not Yelping” and features various characters going on power trips at restaurants because they believe writing Yelp reviews makes them legitimate food critics. It also compares Yelpers to ISIS.

The parody article includes a well-crafted fake statement from a Yelp spokesperson that reads: “Our company, along with its millions of users, take Yelp very seriously… To say our critics are out there trying to get free food and using racist slurs on little Mexican children is beyond ridiculous. To compare the users of Yelp to terrorists is not only cruel, but the definition of libel and slander.”

It also features a hilarious statement allegedly from Matt Stone and Trey Parker, the creators of the show, who gave the lawsuit a one-star review:

“We’ve taken a hard look at the information presented to us, and after reviewing it, we have given Yelp and their lawsuit only one star. Their lawyers delivered us legal documents in a very unprofessional manner; not bothering to smile or even a quick handshake. The writing on the envelope was barely legible and in two different colors. It is our personal opinion that Yelp could do a much better job by not suing us for ten million dollars.”

A real Yelp spokesperson tells Eater that the company has no plans to actually sue South Park. “The rumor about a Yelp lawsuit is entirely untrue and was started by a satire site that has received far too much media credibility.” She adds, “We have no interest in legal action against the fantastic team that makes the South Park magic happen.”

Yelp also took to Twitter to assure followers the whole ordeal was fake:

As Abraham Lincoln once said, you can't believe everything you read on the internet. #Satire #ItsAJoke #Chill pic.twitter.com/4G1BwCgwAZ

That’s nice. But I have it from two restaurant owners that if you pay Yelp they put positive reviews up front and visible and hide negative ones, but if you don’t pay then they do the opposite. And that when they call demanding money they brag about this practise.

Hipsters? With a profit motive?

Actually, most all the rating systems have huge flaws, and encourage really malevolent people to screw good providers, and with no recourse to set things right.

Yep. Another one of those that comes to mind is AVVO, in the legal professional realm.

I’m pretty sure that AVVO violates the regulations on attorney advertising, as well as the ethical rules on ratings comparing attorneys, which is one reason that I will NEVER accept the AVVO profile, no matter how many times they hound me.

I’m pretty sure that the premium advertising also violates the Texas rules on advertising, and I’m just waiting to see an ethics decision on it.

“if you pay Yelp they put positive reviews up front”

I hear that the oh-so-virtuous Angie’s List does that too.

Fappy the Dolphin was a dead giveaway.

Yeah. I was expecting a comment from Peetie the Sexual Harassment Panda.

Somebody considers that stuff “hilarious”, huh?

nbc.com.co is a fake news site