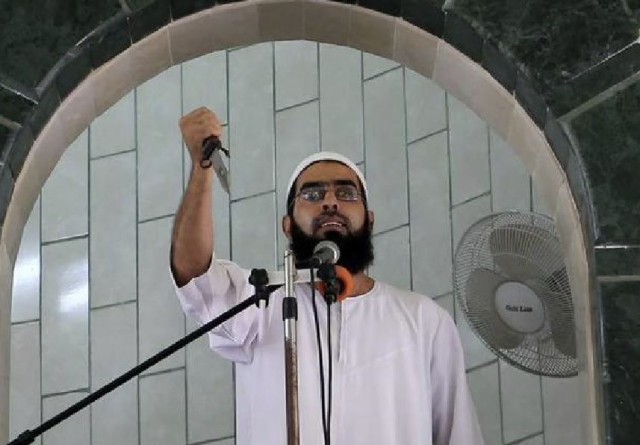 A few days ago we wondered whether the rise of Palestinian knife and rock attacks was the start of a Third Intifada.

Despite cheerleading from Western anti-Israel activists hoping for more violence, and incitement by Palestinian politicians and religious leaders (like the Gaza preacher in the Featured Image), it’s not clear whether this is something that will last. The Second Intifada lasted years and in its early stages — before Israel built the security barrier and launched Operation Defensive Shield — killed 452 Israelis in 2002 alone, plus hundreds more before it was quashed.

But the scale of attacks is not letting up. ]

Many of the attacks are by women, like this one in Afula who stabbed a security guard at the bus station and was shot in the lower body to disable her: 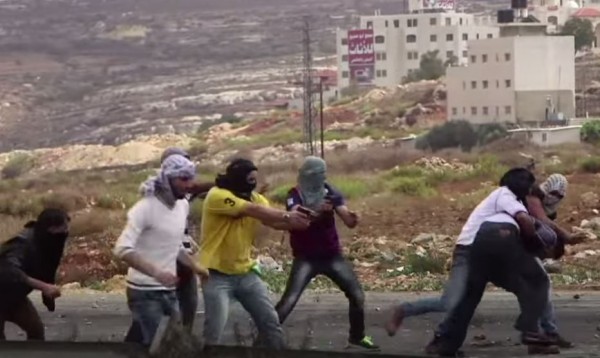 In 17 seconds, #IDF Duvdevan arrested 3 Palestinians who attacked the road to #Jerusalem, everybody else scooted. pic.twitter.com/WaObkboIil

This undercover operation has infuriated Western supporters of the rock throwers, for some reason.

In the southern city of Dimona, an Israeli stabbed four Arabs. That attack was widely condemned in Israel, including by Benjamin Netanyahu.

In contrast, Palestinian and Israeli Arab leaders have praised the knife attacks on Israelis.

How sick is this? Fatah proudly tweets pic of victim of Kiryat Arba attack with knife in his neck h/t @OrenKessler pic.twitter.com/aqtmRbgsBf

Hamas has declared this to be an Intifada:

Hamas’s chief in Gaza on Friday called violence that has hit Israel and the West Bank in recent days an “intifada” and urged further unrest.

“We are calling for the strengthening and increasing of the intifada… It is the only path that will lead to liberation,” Ismail Haniyeh said during a sermon for weekly Muslim prayers at a mosque in Gaza City.

(added) Gazans who approached the Gaza security fence were shot by Israeli forces. The circumstances are not yet clear. Reports indicate 5-7 killed, but it’s not confirmed.

Here are some updates, which will be expanded throughout the day:

Innocent beer drinkers being targeted by the Israelis on the Gaza border. pic.twitter.com/WTsphPwKRe

(one of the men in the photo above was killed)

That guy in your featured image isn’t just holding a knife, Prof.

Despite the increase in violence, I doubt that there will be another intifada because the military situation has changed since 2000. I have heard that today there are more barriers and more security than there was back then, and troops have clearer objectives when dealing with violent riots and terrorists. This will limit the chances for successful attacks, and ultimately save lives on both sides.

This is not for a lack of trying by the “international community” to get Israel to weaken its defenses. This is another case where blind political correctness can get innocent people killed.

What we need is some violence against the anticivilization, antiIsreali vermin in this country.

Those beer bottles being held by those “innocent Palis” look like molotov cocktails. Remember muslims aren’t supposed to drink alcohol.

When I got to, “Despite cheerleading from Western pro-Israel activists hoping for more violence,…” I thought, “WTF?” and looked up at the byline to see who wrote it.

I’m Western and pro-Israel (but not an “activist”), and it wouldn’t occur to me to hope for more violence.

I hope you just had a brain-keyboard malfunction.

If they didn’t want another intifada they shouldn’t have raised their kids for the last 15-20 years pushing for one.

You know what they say about knife attacks.

Bring a gun. Seems that Israel could use less Gun Control and more Good Guys with Guns than worrying about whether the person trying to kill them is a “youth” or not.

Whether by an underage meat robot or by a fully armed and recognized infiltrator.

Shoot them. Israel is going to get bad press no matter what. So, shoot them, film the wails of their women and the curses of their men. Put together a montage showing who started it and remind them if they do not attack they will not be killed. Moreover, lard all restraints and bullets, and let them know these items are larded.

BTW, if Israel needs a Christian volunteer to lard bullets and such, let me know.

“Stones and knives may take our lives,

but the ‘international community’ would never hurt me.”