Why do some guns kill and others don’t?

Why do some guns kill and others don’t? 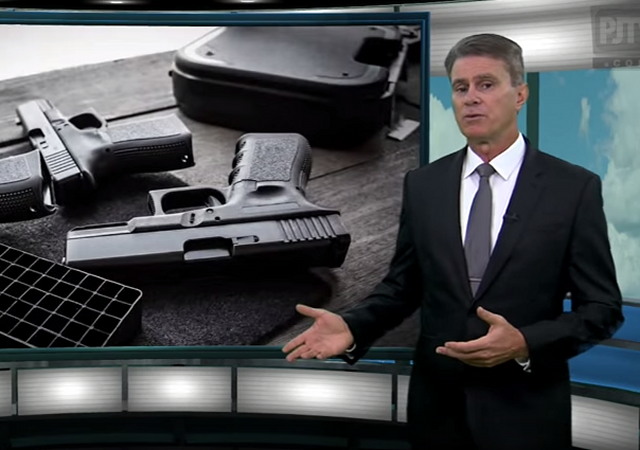 In the newest edition of Afterburner, Bill Whittle examines the issue of gun control from a liberal perspective and follows it to its logical end.

If it’s guns that kill people, not people, then why do some guns kill while others don’t?

Whittle suggests that perhaps the problem has something to do with boys growing up without strong father figures as well as the left’s continuing effort to water down masculinity into a version of femininity lite.

He cites as an example, a recent New York Times article titled 27 Ways to be a Modern Man.

As usual, Whittle shreds the progressive argument in the process.

In case you missed it, Ace of Spades wrote an excellent response to the New York Times piece.

New York Times Writer Attempts to Explain What It Is To Be a “Modern Man,” to Everyone’s Great Embarrassment

It is often unmanly to even discuss “being a man” at all, but it can be done.

But describing “being a man” as nothing more than a series of trivial consumer choices reduces “being a man” to being a woman, but with these fashion preferences swapped out for women’s.

The other things that make someone a “modern man” are, apparently, simply behaving like a liberal, urban white woman (the actual target demographic of this piece), as in:

27. People aren’t sure if the modern man is a good dancer or not. That is, until the D.J. plays his jam and he goes out there and puts on a clinic.

Yes, crying and dancing and thinking guns are icky. That’s pretty much an exact description of Rooster Cogburn and Chuck Yaegher.

This New York Times piece is pure hatebait — hatebait, because it’s written to be mocked, but linked each time it’s mocked.

I was listening to NPR yesterday, and the topic was the Nobel Peace Prize for the 4 NGOs involved in the origin of the Arab Spring in Tunisia. According to them, it all started with a self-immolation, which apparently was the first of thousands.

In Tunisia in recent years, people who want to get attention by killing themselves, burn themselves to death.

The sissy boys in the media getting their panties in a wad over a few Marines pissing on corpses is a great example of the modern man…..sorry, modern sissy boy.

Wow! What a video of what sanity looks like!

Modern man will “…sit silently sobbing…” whether it’s in style or not.

That’s awesome. There is less than one in one hundred million chance every year that an American gun will become a mass murderer. Compared to one in one thousand scalpels that will abort and/or cannibalize a wholly innocent human life, the logical conclusion is that we must criminalize abortion and ban scalpels. It is literally for the children.

Criminalize abortion and cannibalism (aka “Planning”).

A vast majority of men I know and meet are masculine, and rightfully so. It’s in their genes… it’s in their DNA.

Most men I know have no idea the liberal media/politicians are trying to feminize them and even if they did know they would laugh at the stupidity of the effort.

Liberal social alchemists don’t know they are a laughing stock b/c most people don’t tune into their crap.

We (who are dealing with politics on a daily basis) would do well to maintain a guard against a political-bubble mentality thinking this is ‘changing’ men and keep the media’s BS in perspective.

I say, mock these liberal snots instead for being fizzled morons.

The idea that “if we outlaw guns only criminals will have guns” ignores the point that it’s not criminals shooting up schools.
1:31 PM – 9 Oct 2015

I didn’t know that NFL punters got hit in the head that much.

I never thought I would hear a ‘No True Scotsman’ argument regarding school shooters. Kluwe should stick to world of warcraft. At least there he matters.

Well they weren’t criminals before going on shooting sprees. I have no idea what his point is, but that part is technically correct.

For most of them, they’ve actually committed several criminal acts before they got to the point where they were inside a school building shooting unarmed students in the face.

Maybe he means they are not the type of person who would get a gun in violation of the law (not being experienced criminals) so while regular criminals, whose main motive is profit, might still have guns, the school shooters, who have no such profit motive, wouldn’t.

Invariably they got all their guns legally.

Make it harder to get guns legally, or almost legally, and the school shooters won’t have them, if you buy the idea that only criminals will have guns. So’s the thinking.

Well, if you take a look at how the 2011 Norway shooter got his guns, he managed to get them all legally as well, despite Norway having far stricture gun control laws than the US does.

Considering that is still the deadliest mass shooting in history, it pretty well disproves the idea that tougher laws will make them go away.

Ironically, he had tried to get his guns in the Czech Republic, and despite having far lighter regulations than his native Norway, apparently he got blocked…

My concept of a modern man would be Chuck Yeager.

It seems that modern man is a twelve year old girl.

Hip-hop confederates. So, predictably, some of them are dead now… And some are rich.

It’s unfair to blame the father. The mother raised the autistic moron, and encouraged him to use and love guns, and lived with the pathetic baby boy until his death at age 26. One of the biggest tragedies is that she didn’t follow Nancy Lanza to a deserved death at the hands of her son.

The New York Times ideal man is the one on the right: