US Pivots on Strategy in Syria

US Pivots on Strategy in Syria

“…a lasting defeat of ISIL in Syria will depend in part on the success of local, motivated, and capable ground forces” 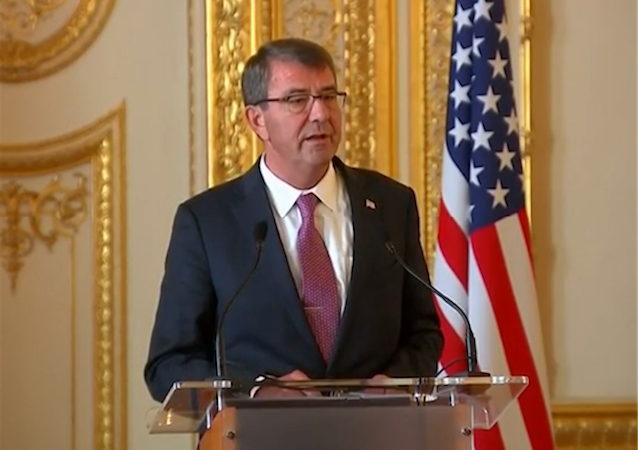 The United States will discontinue its efforts to create a new, moderate rebel fighting force in Syria as part of the effort to “degrade and defeat” the Islamic State, the Pentagon said Friday.

Most analysts believe that this reflects a failure of the US’s current strategy in the region. That strategy—which focused on training new fighters—drew widespread criticism, particularly from Congress. In a statement to the media, Defense Secretary Ash Carter defended the change in policy by emphasizing the Administration’s continued commitment to relying on local forces to get the job done, saying, “I remain convinced that a lasting defeat of ISIL in Syria will depend in part on the success of local, motivated, and capable ground forces. I believe the changes we are instituting today will, over time, increase the combat power of counter-ISIL forces in Syria and ultimately help our campaign achieve a lasting defeat of ISIL.”

During a brief press conference, Carter cited the work that US forces have done with rebels in northern Syria as an example of what they would like to pursue with other groups in other parts of Syria going forward:

The Pentagon will now provide equipment and weapons to vetted Syrian units “so that over time they can make a concerted push into territory still controlled by ISIL,” Pentagon press secretary Peter Cook said. ISIL is another name for the Islamic State, which now controls a wide swath of Syria and Iraq.

“We will monitor the progress these groups make and provide them with air support as they take the fight to ISIL,” Cook said in a statement to reporters traveling with Defense Secretary Ashton B. Carter in Britain.

U.S. officials are hoping the move will help friendly Arab forces replicate the success that Syrian Kurdish fighters have had against the Islamic State in northern Syria, and eventually isolate the group in Raqqa, its de facto Syrian capital.

U.S. officials are also hoping the new effort will help allied forces secure parts of Syria’s border with Turkey and choke off the Islamic State’s supplies of fighters and weapons from the north.

Of note: sources in the Pentagon speaking under the condition of anonymity insist that the shift is not a complete abandonment of the current training regime; however, the failure of the program to produce workable results suggests that perhaps they should. Last week, one Syrian commander handed over equipment to militant extremists; other fighters trained in the original program have abandoned the mission, or been captured or killed.

This move comes amid growing tensions between the west and Russia. Yesterday officials aid that Russian missiles bound for targets in Syria crashed in Iran, causing damage and possibly wounding civilians.

Russia, of course, can always be counted upon to take full responsibility for its actions deny everything:

The Russian Defense Ministry, however, took strong issue with the CNN report in a posting on Facebook Thursday.

“Unlike CNN, we don’t report quoting anonymous sources, but we show launches of our missiles and the targets they hit in real-time mode,” the statement reads, noting that Russian drones are operating in Syria around the clock, presumably monitoring operations.

It continues, “No matter how unpleasant and unexpected it is for our colleagues in the Pentagon and Langley, our strike yesterday with precision-guided weapons at ISIS infrastructure in Syria hit its targets.”

In response, one U.S. official familiar with the intelligence reports told CNN, “These are the people who told us there were no little green men in Crimea.”

Adding to the tension are confirmed reports that Iranian Brig. Gen Hossein Hamedani was killed by Islamic State militants while on an advisory mission to Syria.

There is no pivot. Out of $500 million alloted to this program we’d spent $40. (From Armstrong and Getty this morning.) The program never got off the ground.

this, from the scum busy destroying the US military…

they don’t even know what those words mean.

“Vetted Syrian units”? Government units? Because those are the only ones that will be throwing lead down range at ISIS. There are two 800 lbs gorillas fighting and we’re arming the fleas hoping they’ll somehow kill the one we don’t like most first before turning on the other.

We should simply admit in the open we owe all the AQ fighters we killed or captured an apology. We really were never at war with them we had other priorities and they made those possible.

Or we should quit arming AQ and their allies in Syria. Either way would be more honest. We were always at war with Eastasia.

Ash Carter – another gutless sellout afraid to stand up to the POTUS. Same as the current crop of losers wearing stars.

Just a bunch of political hacks playing around with what’s supposed to be the least political element of our society.

Doosh bags – all of them are doooooooooosh bags

I wonder how many of our soldiers have an ounce of respect for Carter… a guy who stood there like an emasculated punk while Drunken Uncle Joe molested his wife on camera.

The USA never had any business trying to depose Assad. Syrians did not attack the twin towers or support the muslim brotherhood. The Syrian government did not persecute Christians. They fought a war with Israel and got their butt kicked and since then have behaved them selves. No rockets have been launched from Syria into Israel. No one will say who would or should replace Assad. Pick the nice one from a nest of vipers.

U.S. officials are hoping the move will help friendly Arab forces replicate the success that Syrian Kurdish fighters have had against the Islamic State in northern Syria

Something worked for Kurds, and now maybe it will work for Arabs.

Obama’s strategy appears to destabilize the Middle East which, in turn, is destabilizing Europe (via refugees). As to the United States? Obama wants to personally bring that puppy down himself.

Putin won. And, I do believe Netanyahu is fine with that.

All of this is BS. Obama has been funding and arming ISIS under cover of training “rebels”. When the Russians “rebels”, they were hitting ISIS. However, the LSM and GOPE are too invested in The Won to even think that he is building the caliphate, that he is the real caliph, Syria and the Russians know what he is doing cuz they have all his files.

When the Russians bombed “rebels”.

“US Pivots on Strategy in Syria”

Wait, does that mean we are finally gonna get a strategy? Cause that would be awesome.

Wait? What? Since when did we have a strategy in Syria?