And time is too. 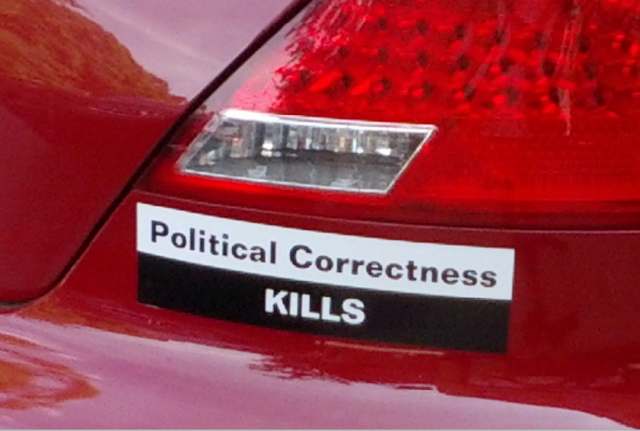 The timing finally seemed right to run it, for a variety of reasons.

From Tim, who spotted this in New Bern, NC:

I spotted the following during a recent visit to this lovely small city in North Carolina; it more than made up for the numerous Kay Hagan yard signs!

The only thing missing is a Blue line, between the Black and White sections. Thank you Professor.

As a retired Air Force and airline pilot, I watched lives not just threatened but lost due to the demands of the PC crowd. It was and is a career buster to dare point out the obvious to the willfully oblivious.

A few weeks ago one click led to another which led to another and I found myself reading the late Michael Crichton’s speech that he gave to the Commonwealth Club of San Francisco back in 2003. I remember the hoopla created by the speech at the time because in it he compared environmentalism to religion. The media and environmentalists went bonkers. What I did not know until I read it is that the main theme was not about environmental fundamentalism. The theme was to identify the greatest threat to mankind. And he identified the greatest threat to humanity as the inability or unwillingness to distinguish between propaganda/lies and facts/truth. Political correctness takes many forms, but I think that is one way to define it.

Please read the whole speech linked below this excerpt of what he had to say about banning DDT:

“So I can tell you some facts. I know you haven’t read any of what I am about to tell you in the newspaper, because newspapers literally don’t report them. I can tell you that DDT is not a carcinogen and did not cause birds to die and should never have been banned. I can tell you that the people who banned it knew that it wasn’t carcinogenic and banned it anyway. I can tell you that the DDT ban has caused the deaths of tens of millions of poor people, mostly children, whose deaths are directly attributable to a callous, technologically advanced western society that promoted the new cause of environmentalism by pushing a fantasy about a pesticide, and thus irrevocably harmed the third world. Banning DDT is one of the most disgraceful episodes in the twentieth century history of America. We knew better, and we did it anyway, and we let people around the world die and didn’t give a damn.” – Michael Crichton, speech to the Commonwealth Club of San Francisco, Sept 15, 2003.

They now have their sights set on genetically modified organisms “GMOs”, Golden Rice, vaccines that have saved millions of lives for mere pennies a dose, the herbicide “Roundup” that I can remember using on the farm I grew up on 35-40 years ago and nobody I know died of cancer from using it, and of course, the granddaddy of all delusions is the insane hatred for fossil fuels.

We are now to the point where we pretend that men who dress up like women really are women. And if you refuse to indulge the fantasy of the person playing dress, YOU are the one ostracized, shamed, and called a “hater”. You must accept the lie or be shunned. How do you teach young children the difference between men and women when adults want to pretend there is no difference? Or the left’s absolute refusal to admit that radical Islam is a problem? I mean you’ve got Muslim majority countries like Egypt admitting the truth that radical Islam is a problem but the leftist president of our secular society refuses to accept that truth. How can you expect anything but decline if objective truth is repressed so that lies and propaganda are indulged?

The Crichton speech needs to be reviewed every year, IMNHO! I suggest at “Earth Hour”, or in my use, Enlightenment Hour, when I turn on all the lights and charbroil a slab of beef to the sound of BOTH the stereo and the TV.

But I’d add a few thoughts…

It doesn’t constitute PC for idiots to harbor idiotic ideas. They just WILL. They have, and do.

PC is where, as you sort of note, they try to IMPOSE idiocy via social pressure, up to and including coercive application of government force. Hence, the “political” element of PC, with “political” having all the meanings it does…from simple shaming by an in-group on through use of government power.

But ALLLLLL groups have to be equally on guard against ThoughtPolicing, as we’ve seen amply demonstrated here regarding some of the more enthralled T-rumpians, who employ exactly the same sorts of tactics we see in the Collective.

Where you have people within any group who suggest a challenge to the orthodoxy of the group…whether right or wrong…the response should be to defend them as people and counter their arguments if you think they’re wrong.

to name a few.