The Beginning of the End for Participation Trophies

The Beginning of the End for Participation Trophies 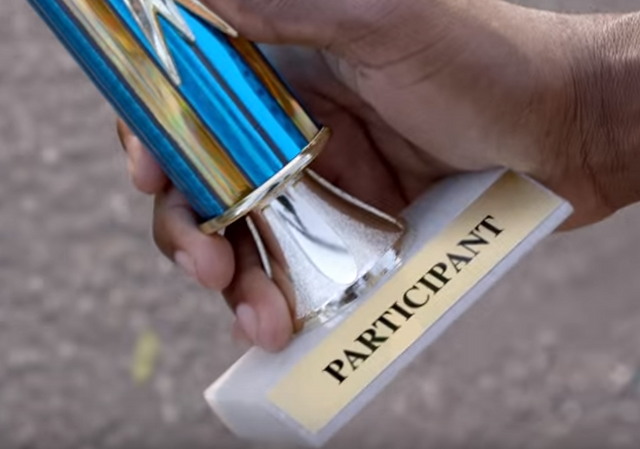 A new commercial for KIA Motors which recently hit the airwaves is getting noticed on the internet for challenging the concept of participation trophies.

In the ad, a father and son walk to their car after a sporting event. The father is stunned to see the word “participant” engraved on the award since his son’s team won every game.

He asks himself “Are we going to start ending games with hugs instead of handshakes?”

Before getting in the car, he tears off the participant label and uses a magic marker to inscribe the word “champs” then hands it to his son with congratulations.

Here are a few reactions on Twitter via The Blaze:

Love that new Kia commercial with the participation trophy

I wholeheartedly endorse the message of this commercial. http://t.co/YqDLlh4f01

This is perfect. If you ain’t first you’re last. http://t.co/xFeF6ghzsN

What do you think, Legal Insurrection readers?

Maybe Kia’s next commercial will be the Nobel committee tearing the “Obama” label off the Peace Prize register.

Wait a minute! Is this going to make me ACCOUNTABLE for something?

Wh…why there are not trigger warnings in this ad…? OMG…please, hand me the smelling sa…*THUMP*

I would certainly take a second look at the KIA, just on the connection that ad made.

May it be the first in an ever-escalating series of common-sense, anti-PC public messages.

Used to own a Kia. Technically a Ford Festiva from a design by Mazda, but license built by Kia.

Dorkiest-looking car in the world, but it got 45 mpg with a four-speed manual.

Liked the commercial too. 🙂

Hopefully, the effect will be the same as when Linus walked into the Christmas tree lot during “A Charlie Brown Christmas”, looked at the aluminum trees (which were all the rage at the time the special was aired), and said, sardonically, “This really brings Christmas close to a person.”

After it was aired, sales of aluminum trees just went through the roof… not!

Butt-ugly car. Which seems to be the styling rage.

Actually, I think that awards for participation and awards for winning are not mutually exclusive.

I spent 40 years as an official at all different levels of amateur athletics. Everything from officiating 6 year olds to college teams and leagues. Softball, baseball, lacrosse, basketball and lacrosse is what I called. I have seen a lot if not most of all that happens on a sporting field including great kids, bad parents and clueless coaches. .

In my opinion, the purpose of the league has to be known. For example, there are leagues (most youth leagues in fact) whose regular season is to expose kids to the sport, get some coaching and learning life’s lessons such as the value of teamwork, the value of hard work, showing up on time, being prepared, etc. With those leagues, a participation “trophy” is fine. I am not thrilled with 9 inch trophies, but from my youth I have little medallions that were handed out each year for the “regular season” in Little League. Once in awhile I see them in a drawer and remember fondly those teams and the friends I had on those teams. I see nothing wrong with that.

On the other hand, there are leagues whose purpose is to determine the best team. For example, after the regular season, Little League turns to All-Star teams. Those teams have a totally different mission for existence. Little League at that level does not award participation trophies, but does give flags to the winning teams at various levels of the overall tournament as a ream wins a level. I see nothing wrong with that either.

Awards should be dependent on what you want the kids to get out of the league and sports experience.

This whole thing is sailed over your head. Of course, there are valid participation trophies…they’ve been around for decades. The phrase “participation trophy” is a euphemism to describe how that limited scope idea has been extended to every single thing in real life. Recreational leagues are a low stakes game for fun and exercise. On the other hand, college students, for example, shouldn’t be getting “participation trophy” grades just for showing up to class.

I have owned 5 Kias so far. Great cars, great value. So, I like the commercial.

I am struck by the casting in the commercial. Could a white father have gotten away with that? Would it have played differently to the audience? If not, why not? Are not white fathers just as competitive? Would it have caused an uprising by the SJW crowd, shouting “patriarchy” or whatever it is that they say?

I apologize for the random stream of consciousness. Great commercial.

I took the click bait and followed the link to another very similar Kia video, which had a Caucasian family. Totally different, that kid was a loser. Not being a sports enthusiast these commercials don’t impress me at all. Is there some kind of underlying racial message? No, I think they just want to sell cars.

I too noticed that KIA was smart enough to use an AA actor in their commercial. Harder for the left to cry racism that way was my thought.

Helen: Everyone’s special, Dash.
Dash: [muttering] Which is another way of saying no one is.

Give that boy a participation medal!