Our candidates are getting cheekier and cheekier… 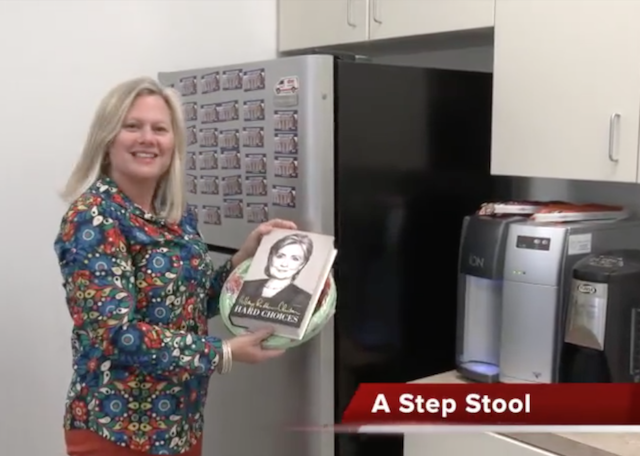 Has anyone noticed that our candidates are a little…sassier…this time around?

Maybe we have Donald Trump to thank for this; perhaps it’s the advent of social media and the unfiltered nature of digital campaigns. Either way, it’s something to be thankful for, if only for its entertainment value.

Last week, Hillary Clinton sent copies of her book, Hard Choices, to all of the Republican candidates:

This is the text of the letter Clinton sent to the Republican candidates pic.twitter.com/EYLTgZ7hts

Her campaign attempted to play this off as a big PR clown on the GOP—but it didn’t work out as well as she thought it would. Ben Carson responded to Hillary’s generosity in kind:

Coaster? Door stop? Step stool? Sounds about right. I can’t think of a better use for it, at any rate.

Carson isn’t the only candidate who took full advantage of Hillary’s generosity. Rand Paul added his own signature to the book, threw it up on eBay, and ended up raking in over 10,000 in the ensuing bidding war:

So, there you have it. Hillary Clinton’s latest scrappy little digital campaign produced Republican counter-memes and raised thirteen thousand dollars for an underdog.

tearing pages out (a la an old Sears catalog) on the way to the hopper would be a more appropriate use…..

I remember an old western where they had an old Sears catalogue nailed to the side of a wagon. The cowpokes would take a couple of pages and go take care of business.

A nice update would be an intern in a stall searching for some non-skid and his/her search failed. Then they pull out her book and say thanks Hillary.

Fire-starting, roach-swatting, and what the old cowboys used to call “sanitary papers” would be good, too!

Kudos to the Good Doctor for responding with humor

Let’s give credit where credit is due. Trump instigated this and proved that nobody gives a flying fandango about what MSM says.

It may be more that a coincidence that there seems to be a strong direct correlation between how “sassy” a GOP candidate’s ads are and their poll position. Cruz has put out some interesting zingers of his own, the rest – not so much. While Fiorina certainly appears competent, I don’t recall any ads by her that were aggressively entertaining. Note her position in the polls.

And this may be JEB!’s political epitaph: “Dull and Boring”.

Give her time. Then google “demon sheep”. Carly practically invented over the top political advertising when she ran for the US Senate from California.

For Hillary, free ad space. For Ben Carson? Waste of money. He has less of a chance winning than she does.

The race to watch, ahead, is the one with Trump in it.

Because this makes Hillary look so good?

I’m thinking you missed the point.

How many trees were destroyed for Hillary’s doorstop?

It may be more fundamental than that. We’re seeing—finally!—candidates who don’t fold like a house of cards at the first whiff of PC criticism.

In that respect, Trump is clearly in the lead. At least so far, he hasn’t been flummoxed by the press. And that reveals the press as essentially helpless against anyone who will stand up and fight back.

Lately Carson has been doing pretty well, too. His refusal to retreat after his hypothetical about a Muslim president seems to have given him a big boost among voters. And he managed to make it all sound very reasonable, rather than merely stubborn.

This repulse of one of Hillary’s silly assaults is really quite skillfully done. If Carson can continue to repel attacks while coming off as gracious—I mean, a video “thank-you” note is pretty gracious, isn’t it?—he’ll go a long way toward convincing voters who think he’s “a great guy … though not quite Presidential material” that he may, in fact, be able to handle the job. And it will help to distinguish him from Trump, who can be called a lot of things, but “gracious” ain’t one of them.

If I had donated to the Carson campaign, I wouldn’t be very pleased about the money spent on this ad. How does this help him get elected? It didn’t create any positive reaction from me and wasn’t particularly clever. I just thought they could have used the money more effectively in other ways.

If you think they spent any money on that then I be Dr. Carson is glad you’re not a member of his team.