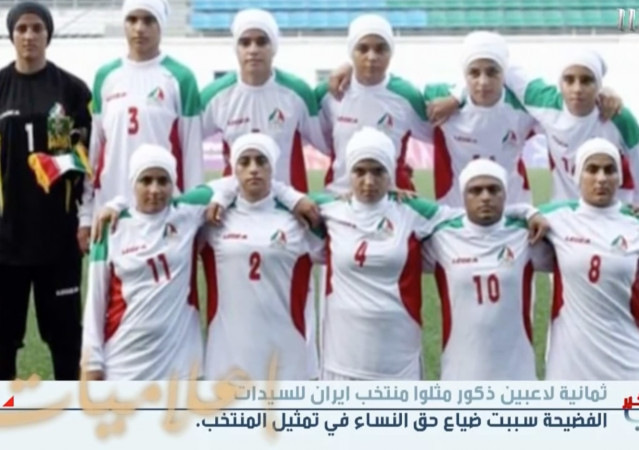 What?! You mean to tell me Iran may have lied about stuff?! It’s a good thing we didn’t strike a nuclear deal with them or anything, oh wait…

“[Eight players] have been playing with Iran’s female team without completing sex change operations,” Mojtabi Sharifi, an official close to the Iranian league, said during an interview with the Iranian website Young Journalists Club. The proportion of players in the team who were born men was not known.

In 2014, it was reported by UK paper The Telegraph that four footballers from Iran’s national women’s team were men.

Sharifi, who did not mention the name of the players, but said that some of them have played as men their entire career but only revealed their gender on the last day of their duty.

He added that Iran’s football governing body was entirely responsible for the scandal which he described as “unethical.”

The country’s football governing body did not react to Sharifi’s comments.

Doubts regarding the gender of some apparently female players in Iran have existed for a long time, with suspicions raised about a goalkeeper back in 2010.

Last year, after it was discovered four of the teams players were dudes, gender checks were supposedly implemented. Looks like someone dropped the ball:

The country’s football governing body is bringing in the random checks after it was revealed that several leading players – including four in the national women’s team – were either men who had not completed sex change operations, or were suffering from sexual development disorders.

Sex changes are permitted under a fatwa passed by a former Ayatollah and can take years to complete.

Gender change operations are legal in Iran according to a fatwa – or religious ruling – pronounced by the late Ayatollah Ruhollah Khomeini, spiritual leader of the 1979 Islamic revolution. The law contrasts with the strict rules governing sexual morality under the country’s Sharia legal code, which forbids homosexuality and pre-marital sex.

…Ahmad Hashemian, head of the Iranian football federation’s medical committee, said the clubs themselves were now obliged to carry out medical examinations to establish the gender of their players before signing them on contracts.

Those unable to prove they are female would be barred from taking part in the women’s leagues until they underwent medical treatment, he said.

“If these people can solve their problems through surgery and be in a position to receive the necessary medical qualifications, they will then be able to participate in [women’s] football,” Mr Hashemian, a qualified doctor, said in remarks quoted by IRNA, the state news agency.

Sex changes are commonly carried out in phases in Iran, with the full procedure taking up to two years and including hormone therapy before the full gender transformation is completed.

Seven players have already had their contracts terminated under the federation’s gender test directive, according to IRNA.

Saudi smear job or Iranian oversight? Both are plausible.

Look at #4 in the front row of the video link. How much more obvious can you get?

If you find women unclean and have no problem turning yourself into one, you might be a Muslim.

I would expect this type of thing here in the west. I mean the Iranian team could have men who well identify as women and that their gender identity….well you know the rest.

Hey, Bruce Jenner hasn’t had a sex change operation either (just plastic surgery on his face, according to reports). And yet, Jenner was recently able to get his “gender” legally changed from male to female. So why shouldn’t these Iranian men . . . er, whatever . . . also be treated as if they are females, despite the p*nis and testicles hanging between their legs, despite the male chromosomes in every cell of their bodies, despite the male hormones surging through their blood?

Since genders are not “real” anyway according to the left, why not just do away with “men’s” and “women’s” teams entirely? If we’re going to deny reality, let’s go all the way!

Bruce Jenner competed, as a man, in men’s sports.

The gender test for the Olympics is a test for XX chromosomes. These guys will not pass.

Yeah, but we can, like, totally trust them on the nuke deal.

Now I wonder what the Ayatollah is wearing under his robes? A chiffon muumuu or a cotton caftan purchased from Body by Caitlyn Jenner?

You can’t change your sex, operations can remove or add external appendages known as sex organs, but your XX or XY chromosomes persist. So let’s stop saying you can have a sex change.

Gender changes, well that is another story- forces have literally changed the definition in the past few years. Look at an older version of Webster’s dictionary and you will see what most of us know as gender-

Now having said all that, shouldn’t Iran then shoot everyone who used to be a man or a woman? If they don’t, they certainly won’t know fact from fiction when they review the nuclear agreement either. Bah!

That would explain the post match celebrations at “Hooters” that the same three players keep skipping every time.

If Bruce Jenner is a woman, then so are all of these guys.

Can’t see how any liberal could possibly object to this “women’s” team competing against actual women.