According to a Rasmussen poll released Monday morning, more voters than ever believe terrorists have an advantage over the United States and her allies. 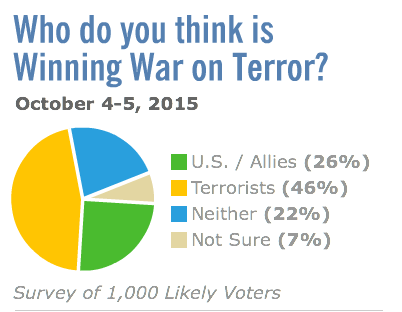 1) Who is winning the War on Terrorism—the United States and its allies or the terrorists?

2) Is the United States too involved in the Middle East, not involved enough, or is the involvement about right?

An ongoing poll, the latest data is part of a disturbing trend that shows lack of voter confidence in America’s handling of the War on Terror. Take a look at the shift in confidence since 2012: 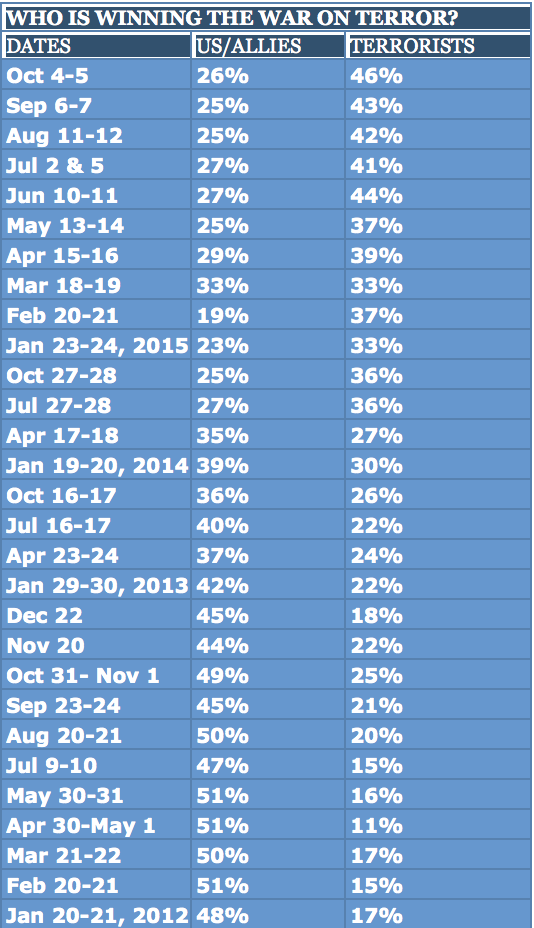 Lack of strategic military focus may be a contributing factor in waining voter trust. Helle Dale of The Daily Signal discussed how the lack of strategic coordination is detrimental to any eventual success in the raging War on Terror:

As incredible as it may sound, the U.S. government still lacks the capacity to coordinate its global counterterrorism strategy.

This disturbing finding is reflected in two recently released reports, one by a bipartisan task force of the House Homeland Security Committee and the other, the “2015 Comprehensive Annual Report on Public Diplomacy” by the Advisory Commission on Public Diplomacy (ACPD).

This void within the U.S. government must be filled. We are currently not effective in stanching the flow of foreign fighters to the Middle East nor in neutralizing the ISIS propaganda that poisons and radicalizes the minds of young men and women.

Since 2011, more than 25,000 foreign fighters have traveled to Syria and Iraq. Most have come from Europe and other Middle Eastern countries, but over 250 have made their way from the United States. How many have come back, presenting potential domestic danger, we simply do not know.

Write the authors of the Congressional study:

“There appears to be no comprehensive accounting of terrorist-travel programs in the U.S. government or any systematic government-wide efforts to identify gaps between them. . . . We found that hundreds of programs, projects, and initiatives have sprouted up to combat terrorist travel since 9/11, but without an overarching strategy to coordinate them, the United States may be wasting taxpayer dollars and failing to allocate resources where they are needed most. Indeed, lack of a strategy not only increases the risk terrorists might exploit weaknesses in the U.S. travel system, but also raises the prospect of waste, overlap, and duplication between agencies.”

The concerns of the Homeland Security task force are mirrored in the annual report of the ACPD, a semi-official body that provides guidance to the Undersecretary of State for Public Diplomacy.

As the word “terrorism” is not used by the Obama administration in its official documents, “countering violent extremism” is the subject of the commission’s recommendations, CVE for short.

ACPD notes that “for public diplomacy professionals to effectively advance U.S. foreign policy efforts to counter violent extremism, there needs to be clear CVE strategy across the U.S. government.” Right now, there is none.

The poll measures how well informed/not informed average people are, not the severity of the situation.

Obama pretends one thing and does another time and again & the Liberal media is complicit to the hilt.

It will take a Conservative backbone in the WH to set an appropriate course for this nation, thus the planet.

Stopping this childish nonsense sounds like a good place to start when developing the “overarching strategy” the report says is missing in current efforts. Then they can move on to Phase Two, forbidding anyone in the White House from putting their fingers in their ears and repeating “La-la-la-la, I can’t hear you, La-la-la-la, I can’t hear you” when ever “violent extremism” is discussed.