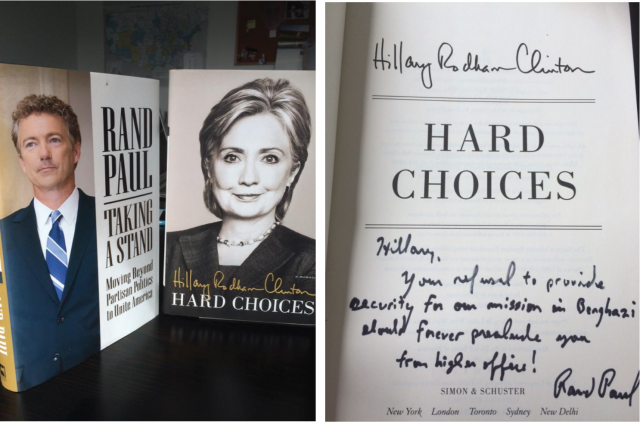 Earlier this week, Hillary Clinton reportedly sent a copy of her book Hard Choices to each Republican presidential candidate.

This is the text of the letter Clinton sent to the Republican candidates pic.twitter.com/EYLTgZ7hts

While we haven’t had a chance to read Clinton’s memoir (none of us have time for a book-induced coma), we can’t help but wonder if half of the book is made up of friendly banter about yoga, Chelsea’s wedding, and curtains. Supposedly, Hard Choices discusses at great length, Hillary’s accomplishments as Secretary of State, all 596 pages of them.

Though it should be noted filling 596 pages doesn’t necessary indicate breadth of achievement so much as it means the ghost writer (we’re guessing here) got a little long-winded.

In any case, Senator Rand Paul decided to share the unsolicited addition to his library with the world — for a fee.

Thanks for the great work of fiction @HillaryClinton. We decided to auction it, bid now: https://t.co/vpFcoYXB8A

Halloween is around the corner, can I recommend a great fictional book that has some scary ideas? https://t.co/vpFcoYXB8A

GET YOUR OWN SIGNED COPY OF A GREAT FICTION BOOK!

ONE OF A KIND! BID NOW ON eBay!

Additionally, you are bidding on Senator Rand Paul’s latest book, Taking A Stand.

You’ll get both books, and both are signed by their authors!

At the time this post was published, the book auction had 70 bids with a going price over $8,000.

The DC silly season has started with a bang!

That is a BIG remainder pile she is working down….

That’s it, Paul wins my vote.

“Working to restore America’s standing in the world?”

Is that old lying whore delusional? I think Bill must have given her syphilis and it’s gone untreated for too long. The brain rot has set in.

Sorry but you are delusional.

There is no physical way for her to have gotten syphilis from Bill.
Someone else yes. Bill. No.

Well, perhaps not directly. But think about the “round-robin” of STD transmission…

Doesn’t that double the number of copies of her book the publisher has been able to move?

Thank you for this little news gem today, Kemberlee.

We are indeed amused. 🙂

Hillary is an idiot if she didn’t see that coming.

Gotta say this, Rand has a sophisticated sense of humor.