“Rubio and Bush are fighting over relatively small turf” 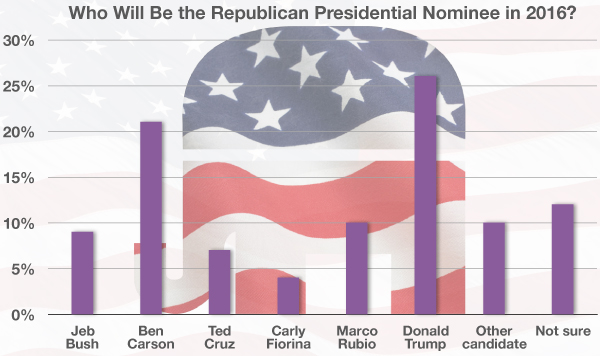 While it seems clear that the loser of this week’s CNBC debate debacle was CNBC (and in many ways, the mainstream media as a whole), I was and am really curious to see post-debate polling.  Watching the debate, I couldn’t help but think that those ill-prepared, condescending, and generally unpleasant moderators were doing the GOP—and conservatives more generally—a gigantic favor.  We’ve long said that the media is biased against, unfair toward, and disingenuous about Republicans, and we couldn’t have written a script ourselves to better prove our point.

The first post-debate poll released, an online NBC poll, shows Trump and Carson leading the race with 26% each and Ted Cruz in third with 10%.  Mike Flynn reports:

No other candidates earn double-digit support in the poll, from NBC News/Survey Monkey.

Among those Republicans who watched the debate, Trump edges Carson, 25-24, while Cruz’s support jumps to 17 percent. Nearly a quarter of Republicans said Cruz did the best in the debate. He was followed closely by Florida Sen. Marco Rubio (R-FL), with one-in-five Republicans saying he did best. Trump and then Carson round out the top 4 performances in the debate, according to Republican voters.

Jeb Bush was widely seen as “losing” the debate. Almost 40 percent of Republican voters say he did the “worst” in the debate. No other candidate fared as poorly among Republicans. Bush is a distant fifth in the national poll, with just 5 percent support.

Rubio also got a lift from his debate performance. He is fourth in the NBC poll, with 9 percent support nationally. In order, according to this poll, the candidates are Trump and Carson tied at 26, Cruz 10, Rubio 9, Bush 5, Fiorina 4, everyone else at 2 percent or less.

These numbers seem in line with recent polls and with the general sense that GOP primary voters are not at all interested in more of the same in Washington.

It is noteworthy that Trump, Carson and Cruz, who have all run campaigns explicitly against Republicans in Washington, command the support of more than 60 percent of Republicans across the country. Rubio and Bush, who are widely seen as competing for the support of the Republican establishment, together earn only 14 percent support from Republicans.

The political press is currently obsessed with the intensifying battle between Rubio and Bush over supporters. As cat-fights go, it has its own drama, to be sure. Currently, though, Rubio and Bush are fighting over relatively small turf. The Republican electorate seems to have moved far beyond their campaigns.

The boost to Ted Cruz is especially revealing. Cruz “won” the debate largely as a result of his epic smack down of the overtly biased CNBC debate moderators. His monologue against the moderators’ twisted questions won the biggest applause from the audience and was repeated in virtually every news story about the debate.

Rasmussen’s post-debate polling focused on a different angle, asking whom the respondents felt most likely to win the GOP nomination.  In that framework, Trump still comes out on top, with Carson trailing, and Rubio and Cruz tied for distant third.

Rasmussen Reports’ latest national telephone survey finds that 31% of Likely Republican Voters think Donald Trump will be the Republican nominee in 2016. Dr. Ben Carson is a distant second at 20%.

Seven percent (7%) of Republicans think the nominee will be one of the eight other major candidates in the race. Fourteen percent (14%) are undecided.

Bush, Rubio, Fiorina duking it out for the Chamberpot of Commerce Award of Amnesty to Illegal Aliens.

Along with some minor distraction candidates.

Duh Donald is his own worst enemy on that score, but you did earn your TrumpBuck for your appalling hackery!

That “big, beautiful door” in the wall is like the trap-door in his long-johns!

DaMav, you are quite correct. The meaningless natterings of the LI nabobs notwithstanding.

The “this election is not about conservative principles” amen chorus of the the First Church of The Immaculate T-rump!

Not a conservative notion in that crap-packed skull, and a fan the same policies as Bernie Sanders.

Sometimes Rags in your crass 8gnorance and childish posts of 5th grade name call8ng you accidentally say something tbat is correct. You are correct when you observe accidentally that this election is not about conservative principles. This election is about rejecting both Obama and the gop establishment combined with making america great again. No candidate understands this better than Trump. Build the wall, deport illegals, bring jobs back to america, and make the eco omy boom again. That is what america needs right now and Trump is the one delivering.

After taking a battering in last month’s poll, Donald Trump has re-emerged at the top of the Republican field in the latest IBD/TIPP poll.

Support for Trump among registered Republicans and those leaning Republican is 28%; support for Carson is 23%. Last month’s poll had Carson up by 7 points over Trump.

Marco Rubio comes in third at 11%, the same as last month.

As I said after last debate in one to two more weeks Trump will be at 32% to 40% in the main polls. He is already there in otber polls.

After taking a battering in last month’s poll, Donald Trump has re-emerged at the top of the Republican field in the latest IBD/TIPP poll.

Support for Trump among registered Republicans and those leaning Republican is 28%; support for Carson is 23%. Last month’s poll had Carson up by 7 points over Trump.

Marco Rubio comes in third at 11%, the same as last month.

People, the only real source of polling info is the Real Clear Politics meta-poll. I wish people would stop dragging in individual polls, around especially unscientific polls.