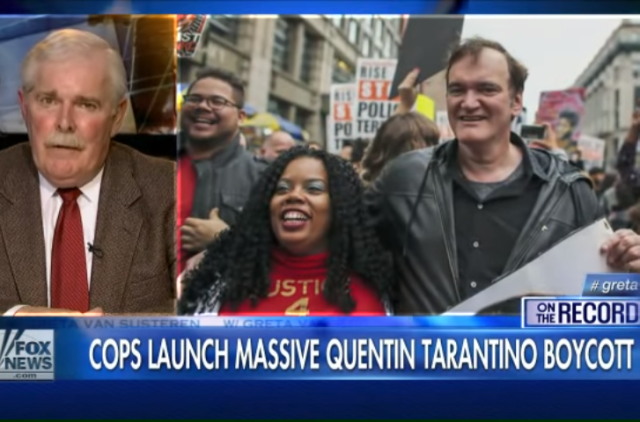 Police in three cities are now boycotting filmmaker Quentin Tarantino for his participation in a recent anti-cop rally, during which he accused police of being murderers.

The latest police force to join the boycott is in Philadelphia.

All 14,000 Members of the Philadelphia Fraternal Order of Police Lodge 5 have joined officers in New York and Los Angeles in calling for a boycott of Quentin Tarantino’s films.

“Tarantino has shown through his actions that he is anti-police,” the group’s president, John McNesby, said in a statement. “Mr. Tarantino has made a good living through his films, projecting into society at large violence and respect for criminals; he it turns out also hates cops.”

The statement comes after Tarantino participated in an anti-police brutality rally in New York City last weekend. “When I see murders, I do not stand by, I have to call a murder a murder and I have to call the murderers the murderers,” Tarantino told a crowd of protesters on Sunday. The event was organized by a group called #RiseUpOctober, which cites the deaths of Michael Brown, Tamir Rice, Freddie Grey, and Eric Garner as lives “stolen by police” on its website.

The New Jersey State PBA has joined police departments in New York, Philadelphia and Los Angeles in calling for a boycott of Quentin Tarantino’s films.

“Mr. Tarantino should be mindful of the potential dangers that can result from the dangerous rhetoric once it is ingrained in the mind of a person who is willing to harm an officer,” New Jersey PBA President Pat Colligan said in a statement Wednesday night…

“Quentin Tarantino needs to understand that as a public figure his voice is one that people listen to,” Colligan said. “He has an obligation to be more responsible. This is not a movie, this is real life where police officers lives are impacted by his words.”

Many people in Hollywood want to get involved in political issues but they’re often embarrassingly uninformed.

They should probably just stick to making movies.

“Filthy-rich, weak-brained filmmaker Quentin Tarantino wasn’t the first and certainly won’t be the last moronic celebrity to roam through New York City, drumming up fury against police officers who risk their lives to protect his miserable hide.”
http://nypost.com/2015/10/29/quentin-tarantinos-anti-cop-protest-built-on-a-series-of-lies/

An overly derivative filmmaker whose biggest talent has always been self promotion latched onto the latest left wing cause.

I tried to watch his films a couple of times and they utterly failed to pass the basic test of drama, the suspension of belief as one is transported into another world. If anything, his movies underscored the knowledge I was watching a movie. Some call this hip and ironic. I called it boring.

First Spike Lee and now Tarantino, too? What’s the world coming to?

Meanwhile, abortionists are social warriors, or something.

Some people will do anything to get a little poon tang.

Far more effective and satisfying to simply make sure all of his movies are available on Youtube.

QT is certainly one of the uber 1%.
It would be nice if his address was leaked and it was hinted that police may be slow responding.
I don’t want him killed.
I just want him to feel helpless for a bit, and to realize the people he is reviling are the people he will expect to respond to his 911 calls.
We all learn from natural consequences

I would be kind of funny if he had the extreme bad luck to be mugged right about now. Who would he call, Al Sharpton?