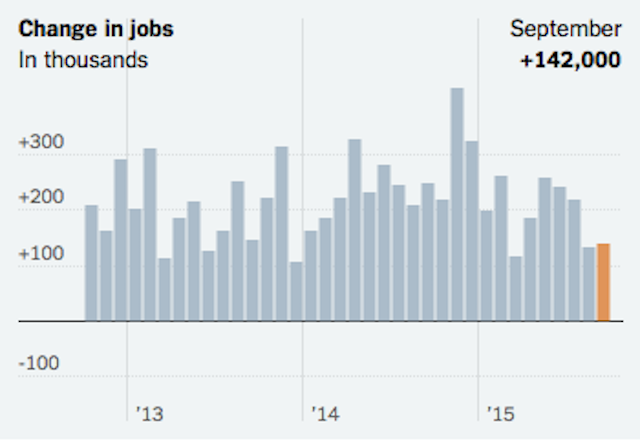 The latest jobs report released today could spell trouble for the US economy—and workers.

According to analysts, the economy underperformed in terms of jobs created. Experts surveyed by CNNMoney estimated that we would see a net gain of 204,000 jobs in this report; gains in excess of 200,000 are considered “healthy,” so this was an optimistic prediction. In reality, however, the economy only added 142,000 jobs in September—an “unhealthy” diagnosis.

The unemployment held steady at 5.1%; however, labor force participation rate dropped to 62.4 percent (from 62.6 percent), and the three month average for job creation has stagnated well below 200,000.

More via the NY Times:

Friday’s report came just two weeks after the Federal Reserve decided that the recovery was still too frail to risk lifting interest rates from their near-zero level. The latest evidence of a weakening economy may push any rate increase into next year even though the Fed chairwoman, Janet L. Yellen, had previously suggested that the central bank was likely to go ahead with a rate increase before year’s end.

“There’s nothing good in this morning’s report,” said Carl Tannenbaum, chief economist at Northern Trust in Chicago. “We had very low levels of job creation, wage growth isn’t budging, and the unemployment rate would have risen if the labor force participation rate hadn’t fallen.”

The Labor Department also released revised numbers from July and August; they overestimated the number of jobs created this summer (in July by 22,000 and in August by 37,000) which experts believe is a signal that the greater global economic slowdown is beginning to affect the US job market.

According to Reuters, the report’s had negative effects across the board on the domestic and global markets:

“You can’t throw lipstick on this pig of a report,” said Brian Jacobsen, a portfolio strategist at Wells Fargo Funds Management in Menomonee Falls, Wisconsin.

Bets on interest rate futures showed investors only saw a 27 percent chance of a Fed rate hike in December, down from around 44 percent before the job report’s release.

“(With) a weak report here, in combination with some of the other weakness that we are seeing across the globe, the odds get dinged for December,” said Tom Porcelli, an economist at RBC Capital Markets.

Investors saw virtually no chance the Fed would end its near-zero interest rate policy at its only other scheduled meeting this year, to be held later in October.

CNBC has a helpful breakdown of how jobs and business growth affects the market, and what it means for the rest of the year:

And they will probably have to go back and revise it downward. Worst President EVER!

Note they did also revise July and August downward. This is significant; in 22 of the previous 27 years, the August numbers were later revised UP by an average of 70,000. Downward revisions for August are rare, and don’t promise anything good.

Not the ‘worst president ever’ – that is insulting to Jimmy Carter.

Rather, the first traitor to be elected president. Can you say Cloward-Piven?
https://en.wikipedia.org/wiki/Cloward%E2%80%93Piven_strategy

In addition, the most corrupt news media ever. They’re still wiping Obama’s bottom as he soils himself.

We just shut down all inpatient services at our local rural hospital. 70 jobs affected – I’ve heard 20-30 permanent layoffs, others to be absorbed by affiliated network.

Friend in Oregon – engineer. Office being shut down – 25 layoffs.

Drip, drip, drip tell me again the economy is booming.

Oops, forgot. My friend’s husband just decided to layoff 6 of his staff as well.

These are all in just the past couple of weeks.

Caterpillar has lost 25% of its market capitalization so far this year, due to falling global demands. When the market for heavy equipment falls, it’s a very bad sign.

When 2 full-time jobs are eliminated and 3 part-time jobs are created the Labor Dept shows that as a net gain. Even if they work fewer hours.

As I’ve pointed out many times, ObamaDoggle is a jobs KILLER.

But so are many, many other Obama policies. Just like they were planned to cripple the American economy.

Cloward-Piven were real people, who really wanted to overcome the DEMAND side of the American welfare state.

Barracula refined that whole concept to include the SUPPLY side.

Check out LFPR for some of the younger demographics…you can’t explain the drop in that area away by talking about baby boomers.

“the determinants of employment other than final demand are the factors which Keynesian macroeconomics so fatally neglects.” (Friedrich A. Hayek, Collected Works, Vol. 9. p. 250)

http://hayekcenter.org/?p=38
~~
The FED should have raised rates two years ago…

Absolutely. Near-zero interest is crisis level, and the crisis ended six years ago. We should have been gradually returning to the historical normal range of 3-4% + inflation as a target. Our recoveries are typically driven by three forces: exports, now declining with world demand, construction which is lackluster in most areas, and private capital investment, which is lagging below levels of a decade ago due to low interest.

Japan already proved that near-zero interest and public “stimulus” spending at deficit doesn’t work. We couldn’t take their long experience of “The Lost Decade” though.

Obviously this is the fault of hurricanes. And snow.

Like Soviet agriculture – 70 years of successful planning unfortunately marred by 70 years of bad weather – Obama’s policies have choked the economy. America has been straining at the bit to recover, but Obama throws road blocks in every direction from ObamaCare to EPA to other regulations.

Perhaps the next crash will finally give the public the spine for real cuts, which are desperately needed at the federal level.

Besides the ill effects, now Yellen has no weapons to fight economic problems. Interest is as low as it can go and the Fed banks’ balance sheets are overloaded with low-interest bonds accumulated through years of QE.

It’s almost like our policy makers set out to do the precisely opposite of the right thing at every turn.

1.) Any economic figures released by the current regime are already massaged, nipped, tucked, facelifted, and flat out falsified to the point where it is not putting lipstick on a pig, but making it “say yes to the dress”.

2.) Even with all this economic Taqqiya the picture it paints is catastrophic.

4.) It is more likely that we are years into a Depression that is masked by massive transfer payments, deficit spending, ZIRP, and QE 1–>∞.

We have nearly one hundred million Americans that have simply been pushed out of the statistics. Unemployed and at this point mostly unemployable by the few jobs left. Tell me how this service economy is working for America?

And these are the numbers reported after Obama played around with them like they do every month. Each month the randomly apply a factor for Seasonal Adjustments. Nobody ever explains the method used to calculate the adjustment and it’s different every year so you have to assume that it’s whatever is politically expedient at the time.

The non-seasonally adjusted figures show the worst jobs performance since the summer of 2009. Six years and trillions of dollars spent and this is the best Obama and the Dems could do.