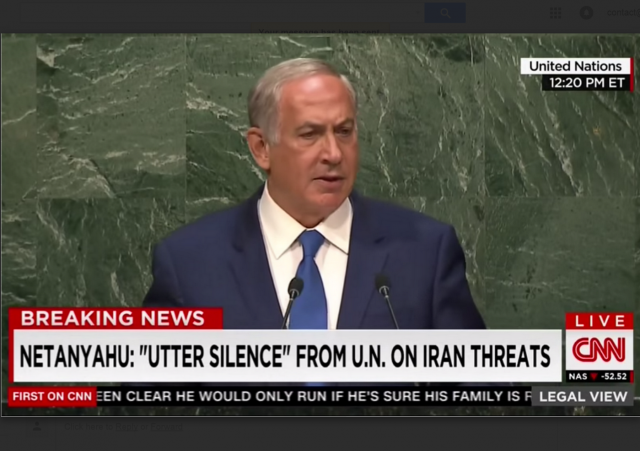 It was a powerful speech — one of, if not his best. The full speech is at the bottom of the post. The full text is here.

Here are some highlights.

Too bad neither John Kerry nor Amb. Samantha Power were present to hear it, and as a show of solidarity.

Netanyahu had a powerful 45 seconds of silence shaming the U.N. for its silence on Iran’s threats to destroy Israel.

In the face of repeated Iranian threats and U.N. anti-Israel resolutions, Netanyahu declared “Israel will do whatever it must do to defend our state and to defend our people.”

Netanyahu also called out the U.N. for its obsession with bashing Israel:

Netanyahu slams UN at the #UNGA for obsession with Israel, then proves it pic.twitter.com/8VbJLWpgu5

Netanyahu also took on false claims of Israeli interfering with religious holy sites and incitement by Mahmoud Abbass and the Palestinian Authority:

Far from endangering the holy sites, it is Israel that ensures the safety of the sacred sites pic.twitter.com/c8vOpetLIc

He ended the speech with a memorable line, and one that is the truth — In standing against Islamist fanaticism, Israeli isn’t just defending itself, it’s defending civilized society.

PM Netanyahu: When will the UN finally stop slandering Israel as a threat to peace and actually start helping Israel advance peace? #UNGA

The same question should be posed to Palestinian leaders. When will you start working with Israel to advance peace and reconciliation?

PM Netanyahu: Israel is committed to maintaining the status quo on the Temple Mount

"More than ever, Israel is defending YOU" – PM Netanyahu at #UNGA pic.twitter.com/WeLt0Nckm6

Here is the full speech:

They do not make men like Bibi anymore, unfortunately.
Excellent speech.

Thanks for embedding the full speech. I watched it live, and it was time well spent.

The UN is WAAAAAAYYYYY past useless, and fully into the realm of actively evil.

We can retain our seat and our prerogatives. Just send to to Nigeria or some other similar spot.

The U.S. should get out completely, defund it completely (as you said), kick it off of U.S. soil (as you said), and suggest they set up shop in Mosul, which I think might be a more appropriate location that Nigeria just now (but Nigeria would be fine, too).

Netanyahu is easily the greatest orator of this era, but more importantly he speaks out on behalf of his people and his pride in his country shines through every word. He calls evil out to it’s face and speaks plainly about the dangerous path we are all on.

And our Americans sat there like tree stumps. Could not find it in their hateful hearts to applaud this man who has the lives of his people as his responsibility against all the odds.

The 0bama Administration is behaving shamefully.

Kerry and Power were where?

This behavior doesn’t reflect the will of the American people.

Why? Why on earth does Israel have this stupid policy? The status quo, foolishly established by Moshe Dayan in 1967, needs to be changed. And what sort of respect for sacred shrines is it to allow Arab kids to treat it like a sports field? If Jews are not allowed there (which I agree with) then Moslems should not be allowed either. It should be a closed military zone.

Yes, because that’s the most pressing issue right now with Iran free of oversight, hundreds of billions richer to fund Hezbollah, spinning centrifuges, and counting the days until they can take action to try and remove Israel from the planet.

How is any of that a reason to maintain the status quo on the Mount? How is the situation in Iran or Lebanon a reason to continue allowing Moslems to control it? On the contrary, maybe closing the Mount will help with those other situations. Israel needs God’s help, now more than ever, and allowing people to trample all over His home and treat it like a park isn’t a great way to attract that help; closing it to everybody except necessary military patrols may garner that extra bit of merit that tips the scales in our favour.

The comparison with the high school speech class–read from a teleprompter–stuff we get from The One. Makes one ill.

An absolutely beautiful moment in the annals of moral rhetoric. God bless you, Benjamin.

Yes, this speech is about much, much more than one’s opinion of Israel. If we are lucky – lucky – it will be soon forgotten. I fear we will not be.

Such a moving powerful speech. One of the great leaders of our time.

Makes me long for a leader of the U.S. who loves his country.

Meanwhile Rabbi Eitam Henkin and his wife were murdered in front of four of their six children, and the government is doing what? This would not have happened if the government was not continually making concessions to the “Palestinians” for the sake of international opinion.

For those in the field of international law, Eitam Henkin was the great-nephew of Professor Louis Henkin, one of the big names in that field. For those more interested in the field of Jewish law, he was the great-grandson of Rabbi Yosef Eliyahu Henkin, one of the most important USA authorities on Jewish law in the 20th century, and the son of Rabbi Yehuda Herzl Henkin, who is building a reputation as a modern authority in the field of women in Jewish law. Eitam Henkin blogged on Jewish law, and had published a book on the subject of infestation in vegetables and its effect on kashrut. I skimmed this book when it first came out, and was impressed with its scholarship; he had a promising future, which has now been terminated. May God avenge his blood.

Why is there a United Nations? Is it really needed? What has it done to bring peace and love and harmony to the world?

As for the speech by the prime minister I can’t help but think why bother? The UN has no shame. Please get us out of there and then tell the UN to leave our country and stock your diplomacy up your…..

The United Nations, World Bank, and IMF were all created in and around the FDR era with considerable influence by Soviet communist spies who had infiltrated the U.S. government. The United Nations was the brainchild of Alger Hiss, who was convicted of perjury and sent to prison for lying about being a Soviet spy. The World Bank and IMF were essentially the creations of Harry Dexter White, a high ranking Treasury Department official and also a Soviet spy. Hiss, White and Lauchlin Currie (another communist spy and close confidant to FDR), were all Harvard graduates.

That’s all background info. A theory that makes sense to me is that the elites decided on a strategy of “convergence” several decades ago. The idea was to create a supra government – the United Nations – to integrate and unite the world under a similar form of government. The elites took aspects of the United States model that they liked – that is, free enterprise and representative democracy and merged or “converged” it with aspects of communism they liked. Those aspects being a bloated bureaucracy filled with highly educated technocrats to create a strong central government. So we end up with this corrupt administrative bureaucratic welfare state that we now have and which was used as the form of government to rebuild Europe after WWII. The UN, IMF, and World bank – again, all the brainchild of communist spies – were crucial and important institutions in creating this transformation. They remain important institutions today. The UN, IMF, and World Bank all “force” emerging economies to adopt similar models of government to be members of the “international community”.

The fly in the ointment to the whole scheme is similar to the one the USSR faced. And that is that people are reluctant to give up their cultural heritage. The trick all along has been to pretend to embrace “multi-culturalism” to get buy in from the people, but the real goal, I believe, is to crush cultural heritage. They want a new culture for the whole world. I think that is one reason why both parties in the U.S. have enabled a mass illegal invasion and why some of the European elites are embracing the invasion there. They want to blur national borders and national identities and dilute cultural heritage. They’ve been very successful at marginalizing fundamentalist Christianity and Judaism in the U.S. and Europe. I also think that one of the reasons why they hate Israel is because it is a “Jewish state”. You can’t have a state based on a religion if the long term goal is to marginalize religion and cultural heritage. The fundamentalist Islamists are also a problem. They are a much larger minority and they seem to have a completely different vision for the world. They want an Islamic theocracy ruling the world.

The UN has worked every bit as well as did the League Of Nations. It’s a joke.

With this speech Bibi made me feel like Obama made Chris Matthews feel. What a treat to see a leader with defined edges and moral clarity.

Can we dump Obama in Iran? Can Bibi come and finish Obama’s term?