Mishandler of Classified Documents for President

Mishandler of Classified Documents for President

Not that one, this one. 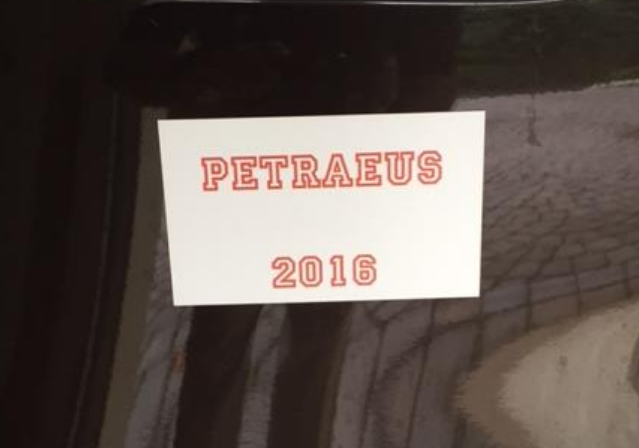 On a car near the CIA in Northern Virginia.

Hey, if Hillary can run, why not the General?

Well he does have some of Bubba’s tendencies such as double dippin’ and all… If you get my drift!

Petraeus paid $100,000 in fines and retired at a reduced grade for allowing his biographer (and paramour) who had security clearance to see something on his computer screen above her clearance level. Once.

Sandy Berger paid $50,000 in fines and did not contest disbarment for attempting to remove five documents from a secure room.

Hillary’s mishandled documents are already in the hundreds and include many detailing sources and methods, the most sensitive of secrets, which none of the classified information in the Petraeus or Berger cases did.

Now you know why I began saying Biden will be the nominee the week of July 4th. She is just too damaged to go on, and nominating her would be a disaster for the down-ticket in Congress and state and local races.

re: Biden. People are speculating that Biden will choose an Obama-approved VP candidate. Also that he will be a figurehead President and the VP will sign off for all the key policy decisions. What is your take?

Nonsense. I mean, he might come to an agreement with Obama as to who would be his vice president — and maybe get the agreement of other people too — but Biden wouldn’t be a figurehead, nor could you engineer something like that.

But Biden’s choice for vice president might be considered of extra importance because of Biden’s age.

I’d vote for him.

And he’s clearly out-of-Washington and not a politician — which seems to be the key qualification this go round.

And we might actually have a chance of gaining back some ground against Russia, Iran, and ISIS. More so than under any other candidate currently running in either party.

He could pardon himself. Rent out the Lincoln bedroom for some extra cash….

That sticker is pretty sublime. I doubt the owner seriously wants the General to run, but it makes a wonderful comparison for all the very high information voters.