Erdogan wants EU to back his war on Kurdish rebels, open Europe for 75 million Turks 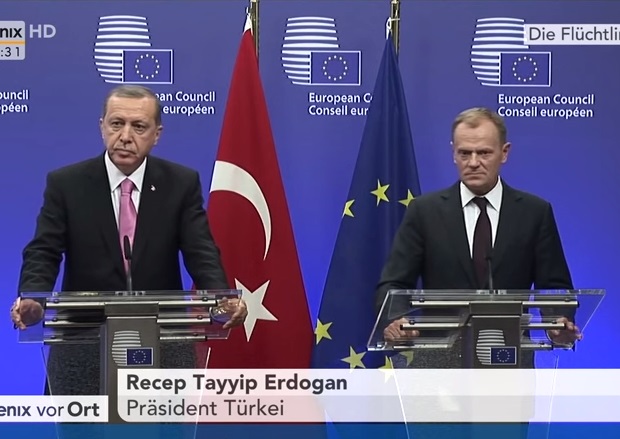 With news reports in Germany putting the number of migrants expected at 1.5 million, the opposition to Chancellor Angela Merkel’s open boarder policy is rising. On Monday, about nine thousand people took to streets in Dresden at a rally called by the anti-Islamization group PEGIDA, or the Patriotic Europeans Against the Islamization of the West.

The Federal and local governments are clueless on how to handle the uncontrolled influx of migrants into Germany. Some municipalities, like the City of Hamburg, want to confiscate private property to house new migrants.

With the European Union and Germany maneuvering themselves ever deeper into a migrant crisis of gigantic proportions, Turkey’s President Recep Erdogan has them bogged down, right where he wants them.  Erdogan has been the patron saint of radical Islamic groups all across the Muslim world — from Egypt’s Muslim Brotherhood to Gaza-based Hamas. Erdogan and his ruling Islamist AKP party have long held close ideological and operational ties with the Islamic State (ISIS) movement. Right from the onset of the Syrian civil war, Erdogan has been worried about the territorial gains made by anti-ISIS Kurdish fighters, who are also allied to Kurdish guerrillas fighting for self-rule inside Turkey.

As the price for his help in curbing unregulated migrantion into Europe, Erdogan wants EU to support and fund his war against the Kurds. With his new found leverage Erdogan wants to settle old scores with the rebellious Kurds. British newspaper The Independent reports:

The migrant crisis could be solved in three easy steps, Mr Erdogan said: training and equipping the Syrian opposition, declaring a safe zone along the border in northern Syria where Isis fighters would be cleared and refugees could be resettled, and creating a no-fly zone. (…) Mr Erdogan [said], “The PKK [Kurdish group]  should not be given some kind of cloak of legitimisation by fighting against Daesh [Isis].”

But the Eurocrats in Brussels don’t need to get too excited about Erdogan stepping in to bar millions of migrants entering Europe. In return for Turkey’s compliance, Erdogan wants EU to open its border to 75 million Turks. Another British newspaper The Guardian reported:

As part of any possible pact, Erdoğan pressed for a relaxation in visa requirements for Turks travelling to Europe. He also wants the EU to list Turkey as “a safe third country”, effectively whitewashing Ankara’s increasingly repressive policies and deteriorating human rights and media freedoms record.

Europe would then end up taking millions of economic migrants — this time of Turkish descent.

If Europe were to agree to Erdogan’s conditions, it would be also be undermining the only reliable and effective fighting force determined to stop the rise ISIS in Syria and Iraq. The much lauded ‘moderate’ Islamist rebels in Syria have been defecting in droves to ISIS.

But the truth be told: there are no good choices left for Europe in the midst of a migrant crisis of its own making.

Where are the Crusaders when you need them?

Putin is the last Crusader.

It is only fitting that the Eastern Church save the Western Church from the self-destructive policies of its “secular” rulers.

Believe it or not, RT? recently aired a round table type discussion during which one of participants expressed opinion that Syria is theirs because Russian Orthodox church traces its origins to Syria.
I’m not sure how Putin will take advantage of the “migrant crisis”, but while EU was recently throwing what in retrospect looks like a hissy fit in re Russia is not being Europe, Russia very much sees itself within European cultural tradition. Putin is a Germany specialist.

Well, the Fourth Crusade did sack Constantinople and set up Western rule of the Byzantine Empire. Maybe Putin will give THAT a try.

The Turks were repelled at the siege of Vienna in 1683. Now they want to complete the invasion without firing a shot.

The Russian coalition may save Europeans from their left-wing leaders by depriving the social activists of an excuse to cause dislocation of European men, women, and children. The pro-choice/abortion/harvesting/trafficking crowd will be equally endangered when Europeans finally notice the progressive decline of their native population caused by aggressive indoctrination efforts to normalize or promote orientations and behaviors antithetical to evolutionary fitness.

And now we finally see why there has been a surge of “refugee” “migration” into “Europe”. Erdogan’s playing the long con, and I’m sure friends of his are making a lot of money on the smuggling. I’m not sure even Europeans are dumb enough to take him up on this though.

Turkey had been a candidate for EU membership before Erdogan reversed course on their century-old movement towards a modern society in favor of regressive islamic practices.

Now he wants his cake and to eat it, too. It will be a glorious day for Turkey, Europe, and the world when he swings from a rope.

The people of the individual nations of Europe need to take a lesson from the American colonists. It’s probably too late for that though, they already gave all their guns away.