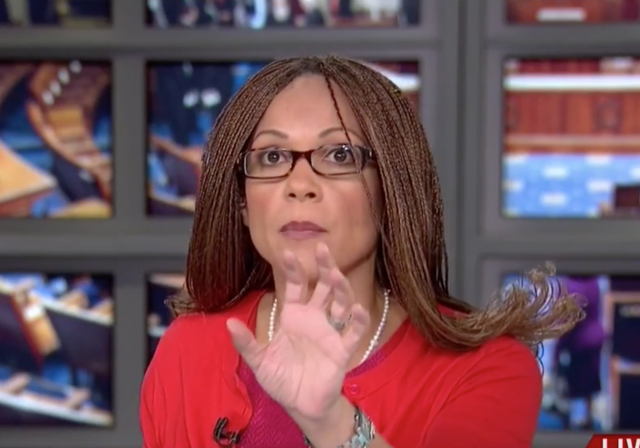 Discussing Paul Ryan’s bid for Speaker of the House Monday, Melissa Harris-Perry made an unusual claim about the term, “hard worker.”

At which point Harris-Perry interrupted Aguilar and then proceeded to wander down a completely unhinged tangent about slavery.

“Alfonso, I feel you. But I just want to pause on one thing, because I don’t disagree with you that I actually think Mr. Ryan is a great choice for this roll. I want us to be super careful when we use the language “hard worker,” because, I actually keep an image of folks working in the cotton fields on my office wall because it is a reminder of what hard work looks like.

So I feel you that he’s a hard worker, I do, but in the context of relative privilege… and I just want to point out that when you talk about work-life balance and being a hard worker, the moms who are working, who don’t have health care, we don’t call them hard workers, we call them failures, we call them people who are sucking off the system.”

We would be surprised if not for the fact that this is the same woman who donned tampon earrings: 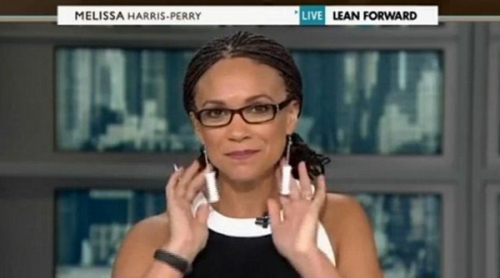 Melissa should know. She’s been picking cotton on the Democrat Plantation.

This is a progressive at her best and the mind set that is currently occupying the White House!

Is it any wonder why the country is in a death spiral right now?

“The US is at that awkward stage – too late to work within the system and too soon to just shoot the b#stards!”

Forget where I got this quote but each day it is less and less funny and more true.

That quote is from the opening lines of “101 Things To Do ‘Til The Revolution” by Claire Wolfe.

I have always wondered if Al Sharpton had a twin. I need not wonder any longer.

Who’s his twin, the tampons, or the woman wearing them?

…she said with somebody else’s hair knotted onto her head.

please tell me that someone beech slapped her…

And water is wet, sky is blue, etc.

I just continue to wonder how she still has a job. The crazy left-wing thrives on this nonsense, don’t they?

She’s a mirror of Obama. (Except for picking her nose.) He still has a job, too.

Pretty much what we got when the asylums closed and those poor folks had no where else to go to get therapy.
Liberals found a place for them – bless their hearts (meant as southern women mean it when they use the phrase).

So basically she just reconfirmed that she is a radical left wing psychopath.

Don’t worry, Melissa. Nobody in the Democrat party is a hard worker anyway. Except maybe the people who have to shovel whats left over after Hillary speaks.

I worry about a world where someone spouting such idiocy can not only be employed but appears to be employed BECAUSE she’s such an idiot.

This woman is the gift that keeps on giving. Absolutely hilarious.

Linked over at my blog: http://triggerwarningblog.blogspot.com/2015/10/attention-attention-hard-work-is-now.html

She has a point that wrangling cats all day in air-conditioned offices is not hard work in sense of physical labor. But if she wants a reminder of what real hard work looks like, why put up a picture of people picking cotton, which is easy enough work that children and women were given it? Why not a picture of miners, or bricklayers, or smiths?

Like a creature that dangles tampons from her ears is someone whose opinion should be given any credence whatsoever. She wouldn’t know hard work if it came up and bit her in the arse. She needs to STFU and go away – far, far away ~

These are the people your government listen to.

Quotable Quotes That girl,I say, I say, that girl, is as sharp, as a bowling ball. Foghorn Leghorn

Best laugh of the day! Thanks!

The next salvo in the culture war? Hey all that American work ethic and pulling yourself up by your bootstraps and working for what you have . .. that’s all RAAAACIST!

Oh the insufferable inanity of it all.

Oh Lordy! Why is this cotton-tampon-wearing nincompoop still on the air?

Because there are low information voters suspended from her low-information hanging fruit.

She’s right. Work is what laborers do with their hands, and with tools, to actually make and do things. Being a diligent legislator, or a celebrity show-biz host on MSNBC, may require some long hours, and some diligence, but it’s not “work” in the sense that labor is. She used the example of slavery from 150 years ago because she’s totally unfamiliar with all the real work real workers are and have been doing long before and ever since then, and because it was the last time anyone in her family actually did any work.

Because calling you a slacker would be so much better?

Hint to MHP: hard work is not looking into a camera listening to yourself talk. If you want to know what hard work is, watch Dirty Jobs with Mike Rowe. Watch any realistic war movie.

Her main point is that she wanted to be sure that no one misinterpret to think she indeed is a hard worker – because damn, she’s not picking cotton in a picture, so there you have it.

He in fact used this exact phrase “Hard worker” the other day.

The second piece of advice I have is keep your grades up until you get in, and after that, make sure you pass. (Laughter.) Because it’s important that you kind of run through the tape in your senior year and not start feeling a little slack. I don’t worry about that with her; she’s a hard worker.

Obama thinks the difference between doing a good job and abad job is how “hard” you work – which probably means how many hours you put in – he has no conception of incompetence.

“Just because you’ve been out of work for a while does not mean that you are not a hard worker,” Mr. Obama added.

There you see it again> Obama thinks businesses hire people based on how hard they think someone might work.