“We see mass shootings at places where we have made guns illegal.” 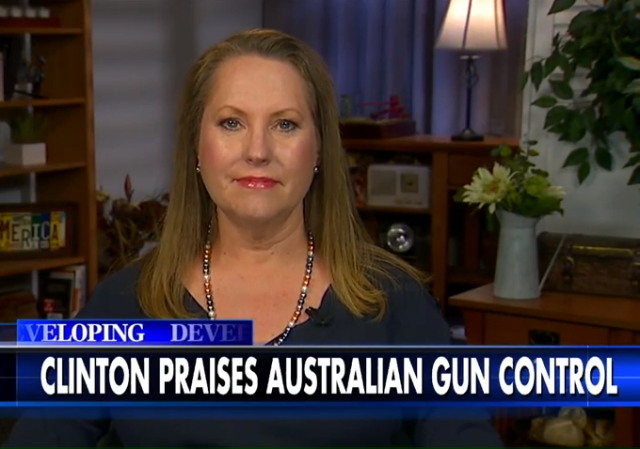 At a recent town hall event in New Hampshire, Hillary Clinton said America should consider a mandatory gun buyback program like the one that took place in Australia in the 1990’s.

A former Republican member of the Texas house of representatives named Suzanna Hupp, who survived a mass shooting in 1991, appeared on The Kelly File last night and offered a response.

The FOX News Insider has more:

Suzanna Hupp, a survivor of the 1991 mass shooting in Kileen, Texas, that left 24 people dead, said that there was a law against concealed carry in the state at the time, so she left her gun in her car.

Hupp, who saw her parents murdered during the tragic incident, said that you never see mass shooting at gun shows or NRA events, places where there are hundreds or thousands of armed, law-abiding citizens.

Hupp said if guns are so evil and unnecessary, then Clinton and her family should give up their armed security.

“I think Hillary Clinton should lead by example,” Hupp said.

As usual, the left is trying to convince the public that the political wind is blowing in their direction on this issue but they may be misreading the tea leaves.

Hillary Is Pushing Her Luck on Gun Control

Really, I can’t help but feel that Hillary is misreading the public mood here. Since the election of 2000 — in which year Al Gore lost his own state in part because of his enthusiasm for gun control — Democrats have tended to shy away from this area. What, one has to wonder, has led them to believe that they should change course now?

As far as I am aware, not a single poll suggests that Americans today are more friendly toward the idea than they were in 2000, which, inter alia, is why Barack Obama did not like to talk publicly about the Second Amendment during his runs in 2008 or 2012. Is Hillary really so convinced that she is going to win the general that she believes she can buck the conventional wisdom and run as an unapologetic gun-controller during the primary?

Even if she is, the manner in which she is going about her little crusade is a touch peculiar. Were she sticking to the time-honored talking points about “sensible regulation” and “common sense” rules, one could comprehend the gamble. But to actively indulge talk of confiscation? To praise “much stricter gun laws”? That would seem to be setting up a damaging showdown with contemporary public opinion — a showdown that might not end too well.

Hillary wants to keep her base energized; she believes their votes, plus those of illegal immigrants, plus the inevitable massive, MASSIVE Democrat vote fraud will get her “elected”.

I am always amazed that somebody as corrupt, totalitarian, mean to the women Bill attacked, and incompetent as Hillary has a base. The vote fraud plans are already in place.

My road-trader friend ate frequently at that Luby’s, and always carried (illegally) during that time.

If he’d been there (trust me) he’d have effectively returned fire on the shooter (who also had a bomb). His little teeny wife would have, too.

Lets call it what it is….confiscation. Using their words only lend it credibility. Stop allowing the to define the terms.

Interestingly, over time since the massacre at Port Arthur followed by the gun buy back program, the number of legally owned guns has risen, especially in NSW.

I personally had no problem with the gun buy back scheme because it took guns out of the hands of some mentally unstable people.

The reality over here is that criminals still manage to get hold of the guns illegally.

Hillary has to beat Hurricane Bernie to win the nomination. But he’s sucked the totalitarian socialist fanbase away, and she’ll need some of that to get the nomination. Fortunately for her, Bernie is vulnerable on guns. So, on that topic, she has to move to his left. After the nomination I expect she won’t mention any form of gun control again.

Suzanna Hupp, a survivor of the 1991 mass shooting

This woman is one of the brilliantly articulate folks that we need in our governing bodies. No waffling, no disguised goals, and her illustrations of the silliness of self-righteous gun-grabbers are tops. ‘Shooting fish in a barrel’ – precisely the goal of the exhibitionist murderers who prey on ‘gun-free zones’.

Sorry, Hillary, you could learn a world about communicating from Ms. Hupp. And another world about citizenship.

She served in the Texas House, and she did it the way it was originally intended; she was elected to five consecutive terms and then did not run again.

RE: Gun-free zones…. I have a CC permit and carry everywhere, even places posted against concealed carry. My thinking is this: although I carry in places where it is against regulations, I carry concealed and nobody will know I’m armed unless a shooter emerges, like at Luby’s or any other mass shooting, at which point those regs will be the absolute least of my concerns. I’ll do my best to defend myself and I’m more than willing to take whatever legal charge may emit from it afterwards. My alternative is to die on my knees out of fear of breaking some law? Yeaaaah, I don’t think so.

Exactly, Hawkins. The “gun free zone” simply means “gun suppression zone if we can buffalo you”.

Some of us just don’t buffalo all that well. If I feel the need to have a gun with me, nobody is going to know that I have one.

Quite right. Here in Oregon, if you’re discovered carrying against a posted sign, it’s basically “trespassing”; the property owner can ask you to leave, and if you don’t you can be arrested.

Again, that is IF you’re discovered.

As an Australian I think the Hildebeast is on the wrong track when she starts talking about the gun buy-back scheme that we had in Australia as a response to the Port Arthur massacre.

Australians are mostly a passive bunch. We have our gun clubs and we accept that farmers need a certain type of gun, but we cannot understand why a person living in suburbia would need to own an automatic weapon.

My own attitude towards rifles in particular has been shaped by a tragic family event where my first cousin was murdered by a man with a rifle. In hindsight I have accepted that the actions of that man meant that he would have used any weapon to kill my cousin, and that he was perhaps mentally ill. ( I only wish for one thing and that is, if a gun owner has been threatening people in what is called a domestic situation, the the police should have the right to remove any gun from the premises). That being said, I personally have no issue with anyone legally owning a gun.

Over the years I have noted that most murders, (those that are not gang related) rarely involve the use of a gun. There has been a spike in people being knifed to death, one punch deaths and a variety of other methods including carbon monoxide poisoning. When it comes to gangs, it is a different story, and there are plenty of stories about gangs shooting up their rivals with the use of illegally owned weapons.

A 15 year old boy was given an illegally obtained gun and with that gun he shot to death the police accountant. It was an act of terror. The question was: who supplied the gun? An answer has been given and an arrest has been made against an individual.

With the rise of Islamic State occurring in this way, I actually do think that now is the time to own a gun and to be ready to use it for defence purposes. I still believe that the guns should be obtained legally and licensed as well.

why a person living in suburbia would need to own an automatic weapon.

Even in wild ‘n wooly America, there are very few “automatic weapons” in suburbia.

The BATF knows officially about some 780,000-odd perfectly legal automatic weapons in the hands of the sedate and law-abiding populace (admittedly not all in suburbia), which sounds like rather a lot but is just a drop in the American bucket.

Last time she ran, she ran out on paying many of the people who provided her services. She really think she’s welcomed back?