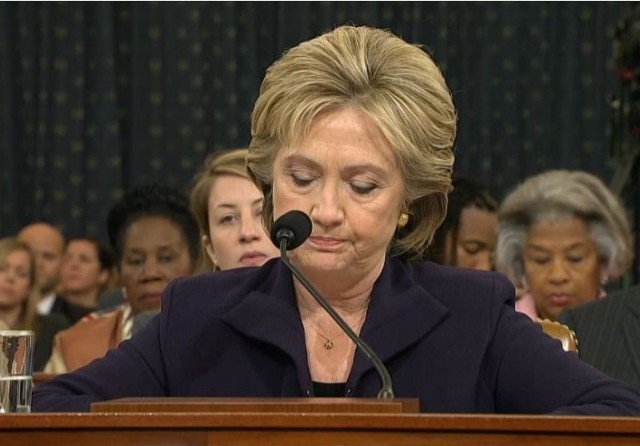 Democratic Presidential frontrunner Hillary Clinton will testify before the House Select Committee on Benghazi at 10:00 EST.

This is the most talked about part of the day — Hillary admitting video had nothing to do with Benghazi attack and that she told people at the time, but the American public was told otherwise:

"Not a single member of this Committee signed up to investigate you or your email"-@TGowdySC https://t.co/cQ6RnmRrQj
https://t.co/gaf7W03ajI

"We are going to pursue the truth in a manner worthy of the memory of the 4 people who lost their lives" – @TGowdySC
https://t.co/o9VSpe7rOY

.@HillaryClinton: "I did not do the vast majority of my work on email." https://t.co/6lMh0KvRRx pic.twitter.com/pSmr8Zhclr

.@HillaryClinton says she did not have a computer in her @StateDept office. #BenghaziCommittee #FNPolitics pic.twitter.com/Q5GzgMNsW0

.@HillaryClinton: There was never a recommendation to shutdown #Benghazi, even after attacks https://t.co/Yz04hma85H https://t.co/5qAYISGNS8

This is getting offensive and coldly opportunistic — playing up the risk that these diplomatics voluntarily undertook. Unbelievable.

Reminder: Secretary Clinton is only 1 witness out of more than 50 so far, writes @TGowdySC → https://t.co/OQAwrXeuXZ pic.twitter.com/QG63305TAc

"I can only conclude, by your own records, that there was a lack of interest in Libya in 2012." – @SusanWBrooks pic.twitter.com/QUX660gzkB

“There is not one email…in 2012 when an explosive device went off at our compound in April.” – @SusanWBrooks pic.twitter.com/dUWz0twajO

Hillary: "Most of my work was not done on emails…" #BenghaziCommittee pic.twitter.com/QntKWk43WC

How this woman did her job without email or a computer, but sent 30k emails about yoga remains a mystery to me. https://t.co/L2OblBaeET

Westmoreland nails it: why did your friend Sid Blumenthal have your personal email, but Chris Stevens had to talk to other people? #Benghazi

.@SusanWBrooks: "We do not, still, to this day, have all of Chris Stevens' emails." #BenghaziCommittee pic.twitter.com/ZKa3Fy1cpW

Rowdy’s opening remarks were spectacular! And Clinton rudely rifled through papers while he was speaking

Cummings may as well be on the Clinton payroll.

Hit the thumbs down by mistake, sorry.

What makes you think he isn’t?

Why is Roskam giving her such credit?

Did you see how he tripped her up at the end? He had her taking CREDIT for EVERYTHING that happened in Libya.

Yeah, I saw that. Thought it was quite clever.

Yes, and according to Obama’s t.v. interview after that USAF action (unauthorized by congress), Obama “never really gave much thought” to what would happen in Libya after the U.S. removed its government.

Of course, we all know now what happened: Libya was taken over by terrorists, and it’s now a full-blown disaster, not just for Libyans but also for surrounding states and Europe.

Using U.S. military might to take out Libya’s government was reportedly Hillary’s brilliant idea (and one she shamelessly boasted about afterwards). Did she, like her idiot boss Obama, also not stop to give a thought to what would likely fill the power vacuum she would be creating in Libya?

Obama and Clinton: We came, we saw, we aborted.

At least Hussein stood trial for his crimes against the people. And collateral damage was scrutinized, not defended and even applauded.

It was a created war zone. Clinton was responsible before the fact. Obama was responsible throughout. They and the social complex are responsible for the subsequent global humanitarian disaster, and anti-native policies specifically.

I wonder what was so important for Hillary that she was as removed from close engagement to what was happening in Benghazi. I also wonder what her definition of accountability is.

Anything that would give her plausible deniability and distance her from any need for accountability.

Good for her the dead cannot testify.

There must be some records of what went on in Hillary’s official conduct during the most critical time leading up to 9-11-12. If I heard her correctly, she didn’t do anything on computer or emails concerning important matters. Nothing in any written trail, even handwritten notes. No clear documentation except what her guys Mullen, et. al. created.

If I heard her correctly, she didn’t do anything on computer or emails concerning important matters. Nothing in any written trail, even handwritten notes.

As little as possible.

There were notes made (not recordings) by the state Department of voice [phone] communications with members of foreign governments, but nothing of what she said within the United States government.

She never made any notes to herself, but, in effect, she actually did one on Benghazi, the night of September 11, 2012. (It’s not entirely her own thoughts, but it something that she knew would have to stand the test of time)

And the committee got it, and this is how:

There was an e-mail to Chelsea, in which she summarized what happened:

“Two of our officers were killed in Benghazi by an al-Qaeda-like group: The Ambassador, whom I handpicked and a young communications officer on temporary duty w a wife and young children. Very hard day and I fear more of the same tomorrow.”

Hillary Clinton, of course, never expected that to become a public record, but, because of the way she handled her e-mail it did – and also did not get deleted. A text search for the string “Benghazi” probably turned that up.

She knew it wasn’t exactly “al Qaeda” and that’s an acceptable oversimplification for her daughter’s ears.

Of course, the next day, the U.s. government started to take it back.

You want to know what’s missing also – what exactly it said in that “claim of resposibility” by Ansar al Sharia. Ansar al Sharia later released a statement saying its leadership did not order the attacks, and the CIA seemed to accept that as discounting therefore the claim of responsibility.

She will get off Scott free as usual and the press and the Dems will provide cover. They can’t do otherwise: she’s their candidate now that Biden is not running.

This is important because she is running for President and will be in charge of everyone’s security. There is a significant portion of the country that are not Democrat. What they are doing is confirming to me that she is indeed not qualified. They are helping her not asking her anything except her concurrance in what they are stating.

The media will make sure she comes out of this stronger than when she went in. She will be made out to be smarter than the entire Republican panel. It doesn’t make any difference how effective the GOP is. You won’t find much negative on this after all is said and done.

I agree. Thought she was great.

I’m afraid the damage has been done and as usual, the Dems will get off free. Her numbers probably will increase too since CNN will spin the results of this latest hearing in her favor.

Loose lip comments by McCarthy and others haven’t helped. We are our own worst enemies.

40 years ago this is a non issue as the person responsible would have fallen on their own sword and stepped down, completely disappear from public service. Now, deny deny deny and have the media cover you with a smoke screen. It’s ridiculous that she denies it’s her fault, she was the head of the State Dept. anything good diplomatically that happened whether she was involved or not was a positive for her, anything bad was someone else s fault. She is a pathological liar and it’s disgusting that anyone would protect her and even vote for her. But then again Democrats never had a problem with the murderer Ted Kennedy so why would they have a problem with this vile woman who leaves a trail of bodies behind her.

I also cant wait for them to interview Patrick “Patches” “Golly Gee” Kennedy while he pops percs and washes them down with scotch. Hopefully someone can drive him so he doesn’t wrap his purple Mustang around another pole.

-Rep. Jim Jordan vs Hillary:
Bill should be really proud of her after today. She has taken his ability to parse words and statements to be just shy of his own ability of using the word “is”. Today’s responses before the committee are second to “Slick Willy’s” during his impeachment hearing. Perhaps she will take the Silver if she “is” able to out fox the D.O.J. on the more than likely F.B.I. charges of illegal holding and processing of secured and confidential government materials for the time she was the head honcho at the State Dept..

edit that to read “if she IS able”
Ya gotta love how important that word IS, is. LOL

Please excuse for not cleaning out a portion of a prior posting of this as an edit I made under another nom de plume of “NYGOPer” in Mediaite.

S&Lick Willie didn’t have an impeachment hearing – he had grand jury testimony.

I call him here S&Lick WIllie in reference to the Savings and Loan scandal, where also you always had these complaiants about how long the bank examination was taking.

I don’t want hitlery to win the election, but it would be nice if the new President utilized her talent and found a place for her in the new administration…

as Ambassador to Libya.

Her and Bill would be dying to go.

They could build an extra room for her private server.

AND HILLARY CLINTON IS NOT REMINDING THEM!!

And another BIG LIE:

That she was a friend of Ambassador Christopher Stevens.

The more that gets repeated, and the more Democrats claim to know that out of their own personal knowledge the more I think this is a lie – and probably an outrageous one..