Black conservative success story is an oxymoron only to morons. 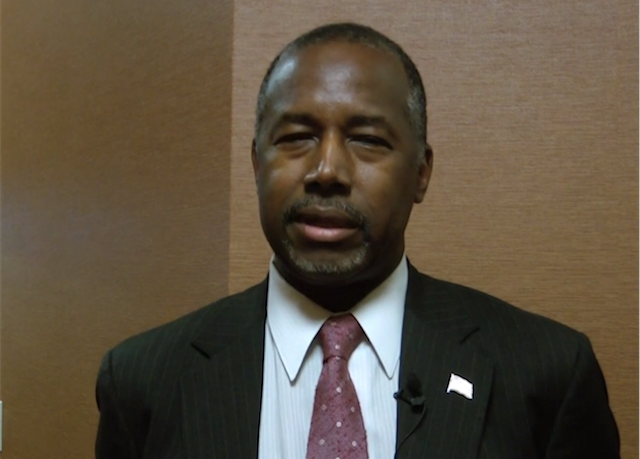 Jonah Goldberg points out something that the MSM has been purposely ignoring:

Carson has the highest favorables of any candidate in the GOP field. But…most analysis of Carson’s popularity from pundits focuses on his likable personality and his sincere Christian faith. But it’s intriguingly rare to hear people talk about the fact that he’s black. One could argue that he’s even more authentically African-American than Barack Obama, given that Obama’s mother was white and he was raised in part by his white grandparents…

He was a towering figure in the black community in Baltimore and nationally — at least, until he became a Republican politician. And that probably explains why his race seems to be such a non-issue for the media…

How strange it must be for people who comfort themselves with the slander that the GOP is a cult of organized racial hatred that the most popular politician among conservatives is a black man. Better to ignore the elephant in the room than account for such an inconvenient fact. The race card is just too valuable politically and psychologically for liberals who need to believe that their political opponents are evil.

Not strange at all.

The left and much of the MSM has been slandering black conservative figures for a long time (Condoleezza Rice and Clarence Thomas, for example) as not-black, Uncle Toms, traitors to their race, or worse. The only surprise with Carson is that the media hasn’t gone that route yet.

That they haven’t is probably a tribute to several things.

The first is that he’s so soft-spoken and obviously a nice guy. Secondly, his poll numbers are not so high yet that they have to take him seriously, and seriously take him down (watch for it, though, if he becomes the frontrunner or the nominee). And thirdly, he occupies the odd position, as Goldberg has pointed out, of being someone the media had already lionized for his accomplishments before they realized his conservative politics.

It would be hard to turn on him too viciously now; the contradiction would be noticeable, although they’d do it anyway (and ignore the discrepancy) if they felt they needed to. Easier, though, to ignore the fact of his blackness and the extent of his GOP support.

One would think that, in a sane world, the fact that Carson is black and is one of the GOP leaders would make liberal pundits admit that GOP voters must not be as bigoted as the MSM and the Democrats previously thought (or previously claimed) they were. Now, that’s a story.

But it isn’t a story you’ll hear much about.

“Black conservative success story is an oxymoron only to morons.”

And, you don’t hear much about Thomas Sowell or Walter E. Williams via the liberal media though they are the well-educated and accomplised voices of conservatism.

Jennifer, Sowell and Williams do not fit the Democrat/LSM idea of what a black man ought to be and think. Consequently, they are mocked in the black plantation community, sections of which find achievement to be deplorable—unless it’s Democrat-approved achievement that does not require people to actually achieve anything.

I’ve been a fan of Dr. Carson for many years. And although there are several GOP candidates that I would prefer (I think) as president, I would be very comfortable with Carson. If interested, here are some pics and notes I made from a Carson rally ( http://www.unshackledaction.com/#!carson-rally/c1oar ).

Liberals would have you believe that the only reason that conservatives like Carson is that they are desperately trying to prove that they are not racist by pretending to support a black man. But is it truly the Left that is showing their racism. Based on what they have said over the years, I can conclude that they believe that the only race that can think for itself is the white race and that every other race must think monolithic-ally based on their race. Talk about racist!

I’m expecting the media to not overtly attack Carson should he stay at the top through a primary or two. But there are already voices that have started the “Tom” attacks, and the media will certainly give them attention and the platform. Similar to how you couldn’t avoid seeing Occupy events covered in the MSM, but hardly any TP events except to cover their critics. Same for Carson.

Presumably, Carson judges people by the content of their character, not the color of their skin. This undermines the prejudice established by class diversity schemes propagated by the left’s social institutions.

Anyone getting to the top of anything without the fed gov won’t play well with the big gov crowd. Dr. Carson is a prime example of what is necessary to achieve great things in this country and it isn’t connected with big gov, welfare, handouts or dependence.

“It would be hard to turn on him too viciously now”

This would be true if the people behind the attacks were capable of shame or self-reflection of any kind. But since it’s the left, no, when they decide he’s an actual threat to Queen Hillary, they will turn on him like a pack of rabid gerbils.

At the peak of his career, media loved his backstory and no doubt assumed he was liberal, being black, you see. Yes, they profiled him.

Now that he’s known as a conservative as much as being a surgeon, they’ll just say he changed for the worse and they’ve changed their regard of him accordingly. In other words, they’ll apply a different profiling filter, the one that says all conservatives are bad. All neat and tidy.

The take down has already begun. The Daily Beast has a hit piece today on Dr. Carson’s church, giving it the scrutiny it never gave Obama’s church. Any black who dares to leave the LibDem plantation must be severely punished.

“…But it’s intriguingly rare to hear people talk about the fact that he’s black….”

I am intrigued by how liberals universally stereotype people’s class or race as a proxy for the ideology they assign to the group. Since 93% of blacks voted for Obama, being “black” is a proxy for supporting progressive redistributionist ideology. If you are a black who is conservative then you are not “black” like Justice Thomas is not black or Herman Cain is not black.

When MLK called upon society to judge a man according to his character rather than by the color of his skin, progressives cheered. Not because of the universal truth of MLK, but because it was for a time useful to advance the Progressive Agenda. But as with all things liberal, the moment that someone is no longer useful to advance the Agenda, they get pushed aside.

I am interested in learning more about Dr. Carson, and the other candidates. I don’t care what skin color they have. The content of his character is the most important thing.