Joe Biden on His Decision Not to Run for President

Joe Biden on His Decision Not to Run for President 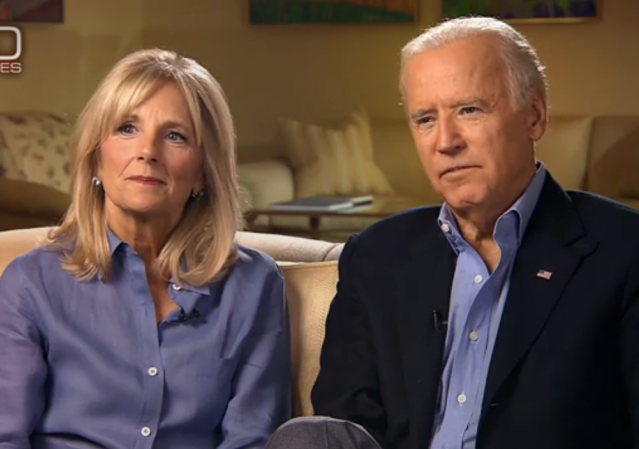 Joe and Dr. Jill Biden sat down with 60 Minutes to discuss the Vice President’s decision not to sit out a run for White House.

“We couldn’t win. I’ll be very blunt. If I thought we could’ve put together the kind of campaign that our supporters deserved and our contributors deserved, I would’ve gone ahead and done it.”

Biden explained that the perceived delay in their decision was due to the fact that, “it took us that long to decide as a family.”

Vice President Joe Biden: I came home and Hunter, our son was upstairs with mom, with Jill. And I walked in and I said, “You know, I just don’t think there’s time.” I’ve just decided, “I don’t think we can run the kind of campaign we have to run to be able to win.” And I remember Jill just got up off the couch, gave me a big hug, and said, “I think you’re right.”

Norah O’Donnell: Were you disappointed? Or were you relieved?

Dr. Jill Biden: No, I think I was disappointed. You know, like I said, in the beginning, I mean, I thought Joe would be a great president. And you know I’ve seen his– in the 40 years we’ve been together — I’ve seen, you know, the strength of his character, his optimism…his hope–

Dr. Jill Biden: So I believed he would’ve been the best president.

IF you insist on “Dr. Jill Biden”, please put it in quotes.

No. Those guys are doctors of medicine and opthalmology, respectively.

“Dr. Jill Biden” holds a PhD. in education, like the examples I cited.

I should be “Dr. Ragspierre” since I, too, hold a doctorate.

When I work with Drs., every once in a long time I use the Dr. designation, because I had to get a doctorate to become a lawyer, and some people have Phditis. Also, all my friends who have doctorates in Chemistry, Engineering, Math and Physics would tend to disagree with you.

I do agree that I remain unimpressed by people who are publishing with advanced degrees, particularly in the non-science areas such as sociology, education, diversity and various cultural sub groupings. I think what has tarred these areas as “unscientific” and therefore unworthy of a doctorate, is the large number of publications that lack academic rigor.

A flagrant example is “The Bell Curve” published by American psychologist Richard J. Herrnstein and American political scientist Charles Murray. Those two fools had no better sense than to assert a thesis where the data said the exact opposite from what they claimed.

I read the summaries of this book in various articles, and those summaries said that the difference they found between blacks and whites in this country was less than the margin of error for the intelligence tests. Differences in data that are less than the margin of error mean that the data are THE SAME. It does not matter how many tests are run.

Much later, I found out that most of those “intelligence” tests are actually academic achievement tests originally designed to diagnose gaps and failures in the schools, not the school children.

There is such a thing as a Phd who holds a doctoral degree, and yet remains fundamentally incompetent.

“…And the right decision for the United States of America.” He really did say that, but the camera cut off before the TV audience could witness it. Yes, of course I was there…would I make up something like that?????

Don’t leave out Dr Who, Dr Death, and Dr Mengele. Inclusivity is all the rage nowadays, donchaknow.

““We couldn’t win. I’ll be very blunt. If I thought we could’ve put together the kind of campaign that our supporters deserved and our contributors deserved, I would’ve gone ahead and done it.”

Notice how contributors is on the same level as the supporters? Does this show what most politicians really are? They dance to the tune of their contributors and not to the people.

Traditionally the vice president is given the honor of representing his party if he so chooses, but in this case Hillary was out the door and running before Slow Joe could say, “I was thinking of putting together the kind of campaign that our supporters deserved and our contributors deserved, but Hillary left me in the dust. So, to be blunt, Dr. Jill informed me I don’t have a snowball chance in hell.”

Wow, a PhD in Education? Sort of like a PhD in Library Management? the easiest and most useless PhD in the inventory of easy and useless PhDs.
“..the strength of his character…” Why is it that no one else in the country, paying attention, has ever seen this character strength? Strength of Character of the type that leads to years of plagiarism? Or, maybe continual insults to average Americans accusing us of wanting to put black people “back” in chains? Joe Biden and his supposed character strength is proof positive that an utterly stupid and ignorant jackass can rise to be one beat from the presidency.

I guess Joltin’ Joe is not that stupid after all…whoever gets this presidency is going to be inheriting a huge fiscal mess that Obama and his central cronies have on life support until the election.

At least he was smart enough to realize that he can’t fix this.