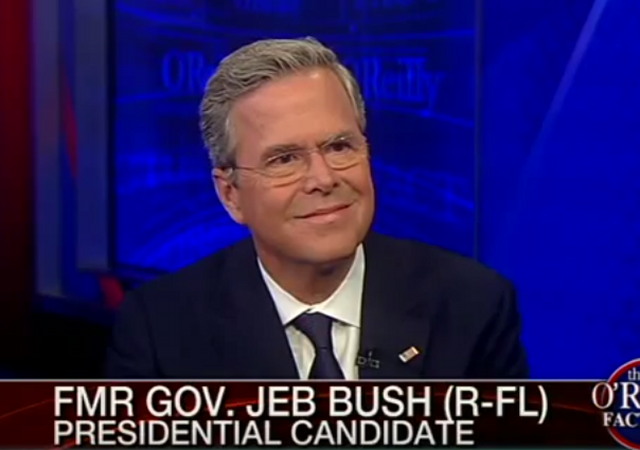 Despite the high hopes of the GOP establishment, Jeb Bush has never inspired much excitement among Republican primary voters.

Now that we’ve had two debates and the candidates are coming into clearer focus, Jeb’s poll numbers are starting to reflect what many on the right already knew.

Daniel Halper of The Weekly Standard:

The latest Pew poll shows that Jeb Bush has fallen to 4 percent in the Republican field. Donald Trump leads the field with 25 percent; Ben Carson is at 16 percent.

Carly Fiorina and Marco Rubio are tied for third at 8 percent of the Republican field.

“At this stage of the 2016 presidential campaign, key issues divide both Republican and Democratic voters, and early candidate preferences reflect some of these cleavages,” writes Pew.

“When Republican and Republican-leaning voters are asked in an open-ended format (no names provided) for their first choice for the nomination, none of the 15 GOP candidates are named by more than 25% of those who may vote in the primary: 25% name Donald Trump, 16% name Ben Carson, both Marco Rubio and Carly Fiorina are named by 8%, 6% name Ted Cruz and 4% choose Jeb Bush.

Last night on the O’Reilly Factor, Bill aired an interview he recently conducted with Jeb in which he pointed out to the former governor that he lacks the anger felt by many on the right over Obama’s policies.

Jeb probably won’t drop out any time soon but the turning point will be reached when the donations stop coming in. That’s the harsh reality of any campaign.

Will donors stick with Jeb Bush?

From the moment Jeb Bush entered the presidential race, his financial backers said they chose him because he was the candidate who could go the distance. But few expected the marathon would be so difficult.

The former Florida governor is fifth in New Hampshire—where he has campaigned hard with a presence on the airwaves. He is trailing Marco Rubio in a new national USA Today/Suffolk University poll and is competing with his one-time understudy for the many undecided donors who are waiting to see how the field shakes out. And Bush is still being overshadowed by the juggernaut that is Donald Trump—as the real estate magnate continues to dominate media coverage that has helped solidify his wide lead in the polls.

In interviews with more than a dozen Bush donors and bundlers this week, many said they are willing to be patient — for now. But some donors are acknowledging frustration that all of Bush’s advantages — including hard dollars and a capable team with a presence in the four early vote states — aren’t making him a more forceful presence in the race.

Jeb Bush was never a viable candidate every since he told the world that he could win the Presidency without the grassroots. Things like that always stay with a person forever. Just like Michael Dukakis in the tank, this will be remembered by the public.

How do you sell what no one is buying? To most of the conservative base dumping Jeb is an “act of love”.

Is vonderfool country, yes, where any president’s sons can become president??

Only goes to show how stupid our “betters” are.

How does he keep on smiling? I have to admit, I just didn’t feel it was right to have a third Bush in the Whitehouse. It really puzzles me why he was considered a shoo-in. Big mistake GOP. Go home, John.

He may have all the GOP big money people behind him but he sure does not have the “grassroots” folks.

Jeb and Hillary do us a favorite and drop out of the race!

We don’t want any more Bushes or Clinton’s as President!

“We don’t want any more Bushes or Clinton’s as President!”

How does the Establishment make it through an article focused on Bush falling flat on his face in front of the entire nation without once mentioning Amnesty for Illegal Aliens??!!

“Hey don’t mention that — don’t want to remind them that we’re still trying to sneak Amnesty shills like Rubio and Fiorina past the voters.”

Yes, and all the Republicans running are also RINOS, except for the actual RINO.

This is a successful governor, and by all accounts would be an excellent President. I have nothing against him, except that dynasty problem, which he answered well in the first debate.

If it turns out that he gets more votes in the primaries, and the Republican voters pick him, I will vote for him with confidence.

… and by 4% of accounts would be an excellent President

4% is not a steady number and there is no reason to suppose this number will go anywhere except down. Bless your heart Jeb, the only way the dynasty problem will go away is for you to go away. Two from the same family is already too many. So now you want to make it three? That, I’m afraid, is out of the question. Just go home please.

Jeb was never going to win. Literally the only reason he was even on the radar was because of his name recognition at the start.

He’s the worst of the worst – an arrogant little slime that thinks he’s smarter than his base and resents having to actually ask conservatives for their votes.

I live in Florida and if he is struggling here, which he is, he will not be the nominee. Let me be very clear. Florida has its own Common Core called the Florida Stanadards and the grades are now coming out and they are not good. People from all political views are mad here in Florida and the one who gets blamed is JEB! What is even very interesting here is that many of the Republicans supporting JEB! are those who are about to retire or who have been in politics for so long that no one trusts them.

Trump or Rubio will win here but I see JEB! and his prospects slipping away.

Believing you can win without the conservative voters in the GOP is one thing, but saying it out loud was the dumbest thing I’ve seen in a long time by a ‘major candidate’. Trashing conservatives in his own party helped Bush keep his Chamber of Commerce cred and amnesty supporters on board, but it cost him a boatload of voters who were already dubious on him when he told them to piss off. Really. Really. Dumb.

I think O’Reily nailed it – “You’re not angry like the voters are” and Jeb said that’s right I’m not. Even when he said he was passionate, he’s passionate about egghead stuff like education and has no intention of getting the feds out of what should be state and local issues.