Iowa: The Trump Campaign is Actually…Campaigning

Iowa: The Trump Campaign is Actually…Campaigning 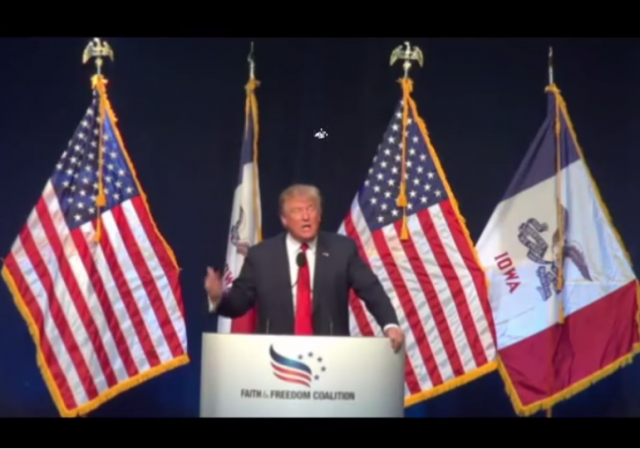 When Donald Trump first launched his presidential campaign, he looked like a man who was on a mission to become King of the Media Circus. He was boisterous, bold, and didn’t hesitate to take his opponents and detractors to the cleaners on a daily basis. Surely, this was some sort of stunt or vanity campaign, right?

Then, of course, the poll numbers started hitting the airwaves, proving that what he was saying and doing was resonating with voters and the American people at large. Now, a new report from NBC News shows that the Trump campaign has decided to put its money where its candidate’s mouth is, and launch a “formidable” ground game in the cycle’s most crucial primary state.

Other candidates shied away from Iowa, not wanting to peak too early; Trump, on the other hand, made multiple, high-profile and highly-attended appearances in the state, and has now embedded 12 paid staffers—more than any other candidate currently campaigning in Iowa—to put boots on the ground and start doing the grunt work that actually wins elections.

The man leading his operation, Chuck Lautner, is local, and highly respected by activists and operatives alike:

“They are doing everything right. I have no doubt that their numbers are there. If they stay solid, they could turn out 23 to 26 percent of the vote — enough to win,” a longtime GOP operative in the state told NBC News.

The staffers are reportedly active, and they’re talking to voters—which is exactly what they should be doing. Even in 2015, with all the opportunities we have to campaign in new mediums, the single most important thing a candidate must do to win is to ask for votes. Simple exposure and idea-sharing, while helpful, isn’t nearly enough.

The campaign is executing an extensive ground game operation. The next phase—identifying neighborhood leaders who commit to bringing a certain number of Trump supporters to caucus in February—should be in place by Thanksgiving, Laudner said.

“We have the total tonnage of names and support–we’ve got the numbers,” Laudner said. “Now we just have to point everybody in the direction.”

There are 1,682 precincts in Iowa. Laudner’s team is determining the number of supporters needed in each of those precincts to result in a caucus-day win and then identifying “precinct captains” to help turn out those numbers on caucus day.

“Let’s say we need 40 votes in whatever precinct—[the designated Trump precinct captain] will say, ‘Here’s the 40 people who are going to vote for Trump,'” Laudner said.

The campaign intends to designate their precinct captains—likely more than one captain in most precincts—by Thanksgiving.

Neighborhood leaders—and especially precinct captains—are crucial to success, especially when you’re dealing with a caucus situation as opposed to a simple primary. The effort is more local, and with these types of leaders and organizers, you’re better able to get personal with neighbors and friends and make a persuasive case for your candidate.

Names and support are one thing. Generating enough momentum to turn those sign-ups into neighborhood leaders and surrogates is another. That’s where the real work begins, so I’m going to reserve judgment on the success of their grassroots campaign until I see how many people step up to knock on doors, make phone calls, and drag their friends to the caucus. I have to admit, though—it’s a good strategy.

Multiple precinct captains? I’ve had fever dreams about those—so we’ll see if they can manage it.

The campaign just reported its 3Q fundraising (remember: self-funding) number—$3.9 million, which is competitive with other candidates: 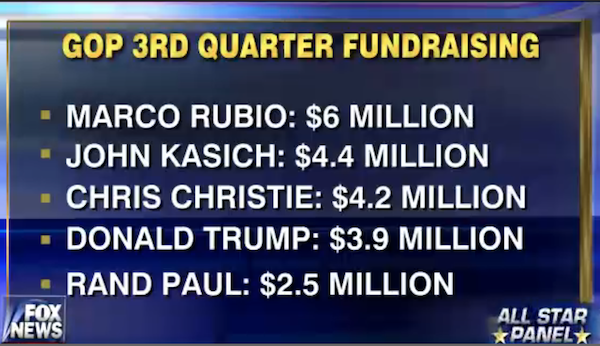 However, the campaign also reports that they have spent just $1.9 million thusfar, which represents a far lower burn rate than we’ve seen in other candidates like Jeb Bush or Ben Carson.

Trump has a self-funded media campaign, a self-funded ground game, and his polling numbers are still impressing even skeptical pundits.

Whaddya know—this is looking more and more like a campaign every day.

Keeping it real? How about keeping it stupid.

Since 2007, what in American politics has been kept ‘smart?’

The democrats, their base and the corrupt media that shills for them have lost their minds, and the GOP establishment has lost its balls, morals, and worse: their loyalty to their country.

Trump intends to win. If he wins, he intends to become a heroic president, unlike the traitor/idiot we now have in office, and the spineless, backstabbing hacks the GOP establishment wants to heap upon us.

Does anyone really believe that Trump wasn’t serious about this?
To comply with the FEC regulations for a candidate, he had to virtually retire.

Seriousness can make all the difference.

In my school days I always ran for chairman of my dorm. I didn’t want the job; everybody knew that I just, on principle, believed that no one should run unopposed. I’d get a few votes, the guy who wanted the job would be elected, everybody had their fun.

But when I decided one year to run for real, a few of the guys asked if I was serious. I said yes. Word got around, and I won in a landslide.

Meanwhile, back in the real world …

… Trump seems to have made it reasonably clear that he’s serious this time. I expect that to be significant.

Some folks didn’t know jack about Trump the man and his love for his country. They judged him by his promotional projections.

Sarah Palin and Ted Cruz knew in early 2012 and signalled it as did Rush Limbaugh. I have pointed this out numerous times to Trump’s conservative critics.

I’m not inclined to rub it in going forward (with a few exceptions).

The Professor played it smart early on with a ‘Trump Curious’ stance and a wait and see mode.

I think that’s the one thing the pundits miss regarding Trump, Cruz, Carson and Jindal – that these individuals actually love America, they believe in the traditional values that made her a free and great nation.

There still is a vast number of Americans who want to believe in and love this country – as is – and the candidates who can share that genuine affection and belief – they’re the ones who will do well.

I’m a Cruz 1st choice, but will vote any one of the 4 I mentioned. Jindal doesn’t get the attention he should, but he is a very good man.

It’s laughable we still refer to these clueless clowns as ‘pundits.’

“Sarah Palin and Ted Cruz knew in early 2012 and signalled it as did Rush Limbaugh.”

Since you say you’ve pointed this out many times, please show your sources for your claims.

Not your claims; your sources from Palin, Cruz and Limbaugh back to 2012.

There he goes again, right one que.

If you dispute, back it up with proof.

Admittedly I only skimmed your comment and had the initial take away you were again on a triggered Pavlovian mission to attack me personally.

Fortunately, before closing the door on this thread, I reread your comment.

It took me less than 30 seconds to find the first citation; an effort you could have made to answer your question for yourself.

Former Alaska Gov. Palin praised Trump’s push on the issue of Obama’s birth certificate, especially his effort to hire private investigators to go to Hawaii and get to the bottom of the president’s obfuscations.

On the “Judge Jeanine” show on Fox News, Palin said, “I appreciate that the Donald wants to spend his resources on something that so interests him and so many Americans, you know more power to him.”

“I think that he was born in Hawaii,” Palin told Judge Jeanine, “because there was the birth announcement put in the newspaper. But obviously there is something there that the president doesn’t want people to see on that birth certificate, that he sees going to great lengths to make sure it isn’t shown. And that’s perplexing for a lot of people.”

And Mayor Michael Bloomberg said a presidential run by Trump would be good for the country — particularly, the media.

Bloomberg also noted that a run by the charismatic, totally aboveboard billionaire could have big benefits for the press.

“I think that would be very good for the Fourth Estate,” Bloomberg jokingly added. “You’d certainly have lots of things to write about. He’d advertise a lot so you’d be able to sell him some space and that would pay your salaries.”

That was the first citation from a 30 second Google.

Start doing your own research on the subject.

Not playing your game further.

…which was nearly two hours ago.

As I figured. You’re not a truthful person.

Rags? I don’t give a holy flying farkle about what you think or don’t think.

Just so you know, k?

By the way, I predict Sarah Palin will be offered a cannot appointment should Cruz or Trump be nominated and win the general election.

For a self-professed Palin supporter, you demonstrate so little about her motivations and long term efforts to bring an end to the Socialist Monster unleashed by the Obama presidency.

Maybe you should switch parties?

In my previous comment spell checker changed the word ‘cabinet’ to ‘cannot’ as in cabinet position.

First, I don’t belong to a party.

Second, I’ve been present with Palin when she spoke in more laudatory terms of Ted Nugent, but no person without a tin hat for a receiver would count that as “signaling” her support for POTUS.

I very much hope and expect that Palin will serve in some capacity in a future cabinet. She’s the reformer T-rump will never begin to be.

Apropos your “switch party” bullshit, you should drop all pretense of supporting any conservative principle. You don’t. Neither does T-rump.

Just switch parties and perhaps you will find a group of like-minded muchachos where you fit in.

But I didn’t mention T=rump.

I simply asked nicely for your sources, since you made the claims you did.

True. And, I was composing my second reply to you during the time you clarified your intent with a second comment.

Not familiar with Chuck Laudner beyond knowing he used to work for Steve King and was the guy who helped Santorum win the state last time. So he is a serious hire.

Number of paid staff in Iowa isn’t always related to outcomes – Santorum had only Laudner and a handful of others and edged Romney’s 30. And no one ever put as many into the state as Howard Dean in 2003-04 for a weak third place.

Iowa is different from primary states and even most caucus states in terms of the time required to participate. Plus, not only do you have to go out in the dark on a weeknight to sit in an unheated school auditorium or library for up to three hours or more in February, you may have to do it over icy roads. Iowa voters who go through with it are dedicated to their candidate.

In the ten previous cycles when the Iowa caucuses have been considered significant (beginning with Carter’s surprise second to Uncommitted in ’76), the polls’ predictions in contested races have been about as accurate as a coin flip.