It’s not a reaction to oppression. 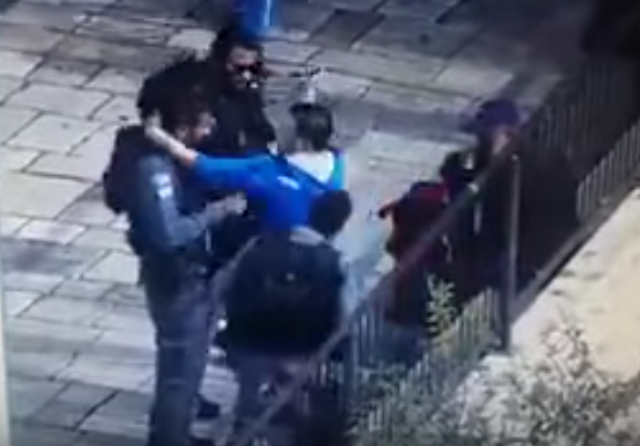 What are the roots of the stabbing intifada?

Jeffrey Goldberg takes a long time to say it, but he gets some of it said. It’s not a “cycle of violence” where both sides are similar. One side is lying and inciting its people to violence, and this has been going on at least since the 1920s in very similar fashion. The current dispute concerns the history of the Temple Mount and the Dome of the Rock, and access to those sites.

The NY Post says it more succinctly, and adds a few more things, such as the latest incident of what one might call the Muhammed al Durah phenomenon, complete with the cooperation of our State Department:

The story has fueled Palestinian anger for days. A photo of a bleeding Mansara, lying on the ground, filled social networks and gave birth to endless angry tweets. It also, apparently, informed official statements, including at the State Department, denouncing “excessive use of force” by Israel.

What’s wrong with this picture? This:

Far from innocent, Mansara, along with his 19-year-old brother, was on a knifing rampage. Video footage from closed-circuit security cameras shows them stabbing an Orthodox Jew and then a Jewish child who left a store on his bicycle. Only later, when Mansara tried to attack two policemen, was he shot down.

Oh, and Mansara was far from “executed.” On Thursday, the government issued a photo of him being treated in an Israeli hospital.

Lies are very effective, and Big Lies often most effective of all.

The current “stabbing Intifada” now taking place in Israel—a quasi-uprising in which young Palestinians have been trying, and occasionally succeeding, to kill Jews with knives—is prompted in good part by the same set of manipulated emotions that sparked the anti-Jewish riots of the 1920s: a deeply felt desire on the part of Palestinians to “protect” the Temple Mount from Jews.

Arabs are convinced that Israel is set on destroying, desecrating or “Judaizing” Haram al-Sharif, the Jerusalem compound that includes al-Aqsa, Islam’s third-holiest site. As Abbas indelicately put it in a mid-September speech, the Jews are trying to “defile al-Aqsa with their filthy feet,” and must be stopped.

Israel points out that the arrangements that have existed since 1967, when it seized control of the Temple Mount, Judaism’s holiest site, are intact, and will remain so: A Jordanian trust, the Waqf, maintains the Mount.

Jews can visit, but not pray there…

Once Abbas presented his al-Aqsa “narrative” in September, Palestinian youths heeded his call to spill blood for Jerusalem. They drove cars into pedestrians at bus stops, cut down passers-by with knives, meat cleavers and screwdrivers and otherwise attempted to kill Jews.

Here’s how the State Department has been complicit in furthering the Palestinian narrative:

Enter State Department spokesman John Kirby, who said Wednesday, “certainly, the status quo has not been observed, which has led to a lot of the violence.”

Come again? That factually challenged statement followed Secretary of State John Kerry, who has his own “narrative”: Israeli settlement expansion is responsible for the violence. (State later walked back Kerry’s statement.)

And after pressure from Israeli and Jordanian officials, Kirby also retracted, tweeting, “Clarification from today’s briefing: I did not intend to suggest that status quo at Temple Mount/Haram al-Sharif has been broken.

Oh, really? Because what else did your words mean?

Even after 7 years, this administration is constantly “winging it” when it comes to political matters. Contradictions are the norm. I’m not a political expert and don’t follow the mechanics of it. But it sure seems like everything or everyone under the direct control of Jarrett act and say one way. And those with some independence act another way and say things that contradict.

Speaking of the shadow witch, exactly what is the office that she holds? What is the actual authority of that office? Note that I do NOT ask what does she do; we already know what she does. We need to look at the official positions these traitors occupy, and what those positions are supposed to be accomplishing.

Maybe we can find breaches-of-duties that we can utilize to insult and degrade those political hacks who are betraying our country’s citizens.

Her two positions are Senior Advisor to the President, and Assistant to the President for Public Engagement and Intergovernmental Affairs. So I’m afraid her job is to do exactly what she’s doing — being 0bama’s éminence noire. Neither of these offices carries any authority, so you can’t find any breach or abuse of that authority.

What I read in the Times of Israel online a few days ago was truly and deeply disturbing. Even normal, non-hate-filled Palestinians minding their own business are absolutely convinced that Israeli settlers have been “raiding” the Al-Aqsa Mosque and that the Israeli government allows Jews to pray at it, which it does not, and which it has not for a great many years. So you have these completely normal people, as level-headed as you or I, saying to the reporter, “I tell you, as soon as Netanyahu stops the Jews from praying at Al-Aqsa, the violence will stop.”

And they completely believe this. You know, that as soon as Netanyahu stops something that **isn’t actually happening**, the rationale for violence will end.

It’s a case study in revolution by social media, all right.

Kirby was a disgrace to the uniform when he was the PR flack for DoD. He’s even worse now that he’s no longer on active duty. A useless piece of damaging to the country crap, like so many in this administration.

I heard a guy on some Palestinian governing body of some kind (Parliament?) declare that the whole mosque thing was a Jewish fabrication. No truth in it whatsoever. It was alllll about decades of hopelessness caused by Jewish oppression. They were strangling the Arab economic development. The yutes were just lashing out, like they do in America.

Lies are thick and blatant among these people. They literally know no shame.

I’ve casually read a reason why they believe this. Apparently early Christians defiled the site first, so when Moslems built a mosque, they were defiling a Christian church, not the Jewish site directly. (Of course the Jewish site was destroyed by the Roman Empire.) So the Muslims, with nary a care as to what anyone else’s history says, trust only their own in this case, and their history says there was a church. And before that, well, there were no Muslims, so no one’s word can be trusted.

That’s very much not to excuse it. But it’s not just something they made up completely out of thin air either. It is, however, a top to bottom contempt for written history outside of approved sources. (Yassir Arafat was specifically quoted making the claim you describe in what I Was reading..)

Our media government feed lies like the Zimmerman trial, “Hands up Don’t Shoot” and “BLM” here. Why not abroad? What makes them magically better in Israel?

The media and government and NGO’s collude in this bs. How much did Soros pay for riots and burning in Ferguson? I presume they do the same overseas.

If the Arabs are so convinced that the status quo on the mount is being broken anyway, then surely this is an excellent opportunity to actually do so. Declare the whole site a closed military zone, and don’t let anyone defile it, whether Jew, Moslem, or Christian.

Religious Jews will readily admit to having “filthy feet”, Mr Abbas, but yours are no cleaner; everyone’s feet are not worthy of treading this sacred ground, so let’s treat everyone absolutely equally by leaving it empty except for whatever security patrols are necessary. Oh, and by the way, Mr Abbas, if you really considered it sacred you wouldn’t treat it like a park, having picnics and playing soccer there.

I think a lot of Israeli Jews think they have every right to do just that, but that it’s stupid to do it and make things even worse, to the point it should be thought of much like a nuclear option. This is founded on a sincere belief that the violence is nowhere near what it could be. It’s not Algeria yet.

Holy sites are nowhere as sacred as people are.

Stabbing a neighbor in “your way” is evil.

Likewise, the Obama administration will continue to promote this lawlessness for its own puerile ends.

You know, even the Muslims who don’t hate us sincerely disagree with your first sentence there.

The truth needs to be told.

Mecca is meaningless to those who were stampeded to death.

That happens over and over again.

This time the Saudis tried to keep the casualty count down, although they had to report each death. They mixed it up with two other incidents.