How GOP Candidates are Preparing for Tonight’s Debate

How GOP Candidates are Preparing for Tonight’s Debate 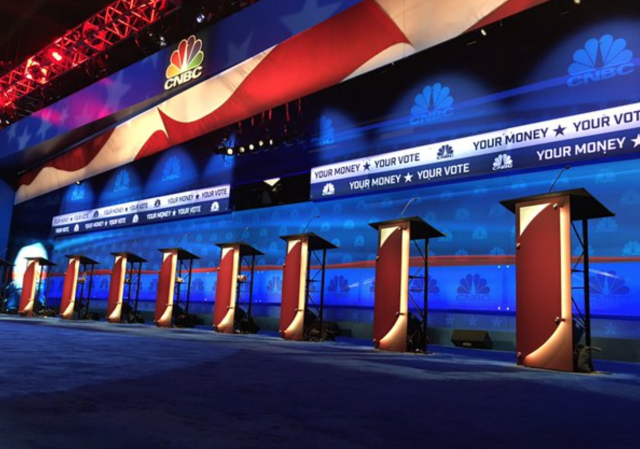 Tonight, GOP Presidential contenders will duke it out on stage for the third time. How are the candidates preparing for this evening’s verbal sparring?

Rand Paul thinks Donald Trump winning the GOP nod and inviting Paul to be on his ticket would be an “utter and absolute disaster” — and he’s ready to use a “yo momma” joke or two to bring him down.

In an appearance on Comedy Central’s The Nightly Show with Larry Wilmore, the Kentucky senator got a chance to talk about how he really feels about the real estate mogul with whom he’s feuded for months. (NBC News got a sneak peek at some clips — you can watch them here and here.)

In another part of the segment, Wilmore suggested that Paul could use the most classic of insulting jokes — of the yo momma genre — during Wednesday CNBC night’s debate to torpedo Trump’s momentum.

“What do you think, like, ‘Your mother wears army boots,’ would that work or not?” Paul tried at first.

The comedian gave Paul an assist, offering a prompt: “Your momma’s so stupid, she thinks pound cake is… ?”

Jeb is following up on emails.

Trump is in poll denial.

.@CNBC continues to report fictious poll numbers. Number one, based on every statistic, is Trump (by a wide margin). They just can’t say it!

Ted Cruz is plotting to take over the GOP field, one competitor at a time. He’s also celebrating his daughter’s fifth birthday.

Carly Fiorina is answering your online questions via video, like this one about Congressional term limits.

Q: What do you think about term limits for Congress? Join us on Facebook for a special live Q&A session at 4:00 p.m. ET.

Ben Carson is enjoying his lead in the polls, while duking it out with Vitor Belfort. 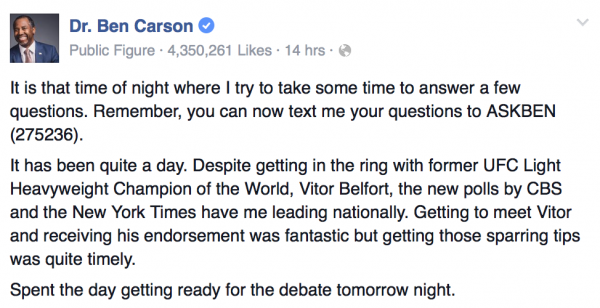 Low poll numbers almost kept him out of Wednesday’s “undercard” CNBC debate, but Sen. Lindsey O. Graham’s presidential campaign made it to Colorado — and took him into territory where few campaigns would tread. Graham (R-S.C.) was the inaugural guest at CNN’s “Politics on Tap” happy hour, its first celebrity bartender and its first participant in a twist on a somewhat salacious name game usually reserved for slumber parties.

Graham, whose family owned a bar in Central, S.C., took to the evening with aplomb, posing for pictures and joking with the journalists and activists who’d RSVP’d. Egged on by CNN’s David Chalian and Dana Bash, he poured pints and shots for party attendees.

“To the Donald!” Graham said, after pouring several rounds of Jack Daniel’s and joining in a toast.

Graham, a natural wit, found his way around the question. “Date” came first. “Sarah Palin — we’ll go hunting on our first date,” he said. Next was “marry,” an easy joke set-up.

When Bash pressed, and asked Graham if he would erase the existence of Hillary Clinton, he was ready with the punchline.

“No, but is she rich? She said she was flat broke.”

Bobby Jindal will be participating in the undercard debate.

Mike Huckabee has no problem doing his debate prep in a closet.

Some fussing over space backstage. I don’t care about where I am backstage. I came to be ON STAGE! https://t.co/KfoDPKT0nu #ImWithHuck

While Chris Christie will be prepping for the big night right next to the toilet.

“This is ridiculous,” fumed Christie’s campaign manager, Ken McKay. “We’re in a restroom.”

John Kasich is wondering what happened to Conservatives.

Like Trump, Kasich spends little time criticizing statists and more time lashing out at Republicans and conservatives. From Politico:

Kasich, at a rally a day before the next Republican presidential debate, lit into the field. He didn’t name names but critiqued a set of policy positions championed by multiple 2016 GOP candidates.

Retired neurosurgeon Ben Carson has acknowledged that he would like to gut Medicare.

Kasich went on, saying, “We got one person saying we ought to have a 10 percent flat tax that will drive up the deficit in this country by trillions of dollars” and there’s another challenger in the field who “says we ought to take 10 or 11 [million] people and pick them up — I don’t know where we’re going to go, their homes, their apartments — we’re going to pick them up and scream at them to get out of our country. That’s crazy. That is just crazy.”

Are you sure John Kasich isn’t running as a Democrat?

There’s only one true conservative in the lot and that is Cruz. The rest would continue the one-party system in DC.

Two new national polls have Trump well in the lead.

I forgot another poll also has Trump with a wide margin.
Morning Consult: Trump 35% Carson 20% Bush 8%

How embarrassing to be caught saying otherwise in the face of that.
I hope this post is updated, just to be on the up and up.

Having been caught rising on his tip toes to make himself look taller for picture taking after last debate, Jeb is preparing for this debate by trying on his new 6 inch elevator shoes.

Barbara Bush will be in the front row with the controls to the shock collar she put around Jeb’s neck. No more whining about how losing is hard and no more inane recommendations that voters vote for somebody else if they don’t want to vote for him.

Jeb’s rant was shocking. This primary is pre-season practice for political combat against the Democrat Political Machine in the general election.

Oy veh, as my Jewish friends would say.

If Jeb can’t accept himself as is, why should anyone else?

I feel sorry for people like that and in a man who would be president, its a crippler.

Study body language and the Bush bros have a lot in common that is uncomfortable to see in a leader.

Makes me wonder just how oppressive their parents were on their self-esteem.

Looks I see on Jeb’s face seem to cry out for a hug and for comforting.

These are not the signals eminating from a born world class leader.

He acts very much like royalty – and he’s just as boring. He just wants to get it over with and be crowned nominee like Hillary was crowned. I saw a video of him a couple of years ago where he stated that he is no longer a conservative in a rather smug way. But now he’s suddenly conservative. Yeah, about as conservative as the “severely” conservative one Romney.

Is there a video of him saying this?

Giant wuss tweets out about “unfair” prior to debate, lowering expectations for his slavish followers.

and they keep showing up to self-identify!

But is seems that he’s slowly coming out from behind that green curtain, so that his polling reflects that conservatives are getting it. Like his un-bussing the Benghazi committee, and his “I get alwong with evewybody” bullshit.

There must be someone who doesn’t know the GOP/DEMS/Media Establishment (the Uniparty) hates Trump.

Honey? Call the island of Diego Garcia and see if anyone there knows anyone who doesn’t know this.