Has anyone seen Rand Paul?

Has anyone seen Rand Paul?

By now, everybody has seen Rand Paul! 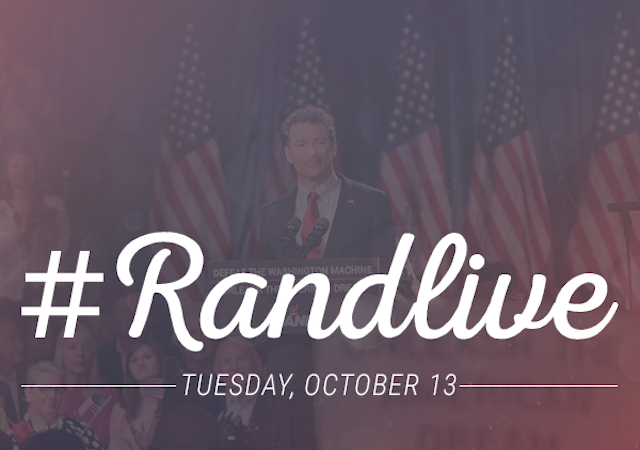 Rand Paul’s star has faded within the crowded Republican field, but his team is hoping that a novel digital effort will draw enough attention to Paul (and his policies) to turn things back in the right direction.

The stream will be available on Paul’s Facebook page and Ustream channel, offering what the campaign has touted as unprecedented access into life on the campaign trail.

The Paul campaign’s Chief Digital Strategist Vincent Harris told Rare, “In an effort to continue his efforts to run the most digital savvy and transparent campaign on either side of the aisle, Senator Paul will be the first Presidential candidate to live-stream an entire day on the campaign trail.”

The live stream, which will be viewable through the campaign’s Facebook and UStream.tv pages, will begin with Paul’s morning in Iowa and will last throughout the entire day.

The coverage will wrap up Tuesday night with Paul reacting live to the Democratic debate—the first time Hillary Clinton will have to face Bernie Sanders and the rest of her competitors.

Now that could be fun.

Tomorrow I am excited to bring my message of liberty to the country as the first Pres candidate to live-stream an entire day. #randlive

You can take part in conversation, ask questions (that I'll try & get to some during downtime) & let me know your thoughts using #randlive

#RandLive all day tomorrow including during the Democrat debate. Tune in to see what I have to say about Bernie and Hillary!

I admire the Paul campaign for doing this. It’s a risky (so, so, so risky—my palms are sweaty) move, but it’s also something new and different and buzzworthy. I’ve written before that I believe great value lies with innovation in electoral politics, and this innovates on a personal level that most candidates wouldn’t even consider reaching for.

Still—will it make a difference where it counts?

It’s a groundbreaking experiment for a presidential hopeful, and it does suggest that Paul is slightly more in tune with tech than some other candidates. However, it’s debatable as to whether or not this will move the needle in a race where the frontrunners are succeeding based more on what they’re saying than how they say it. And as some have already pointed out, there’s an irony to a staunchly pro-privacy candidate putting his life on display for the whole internet to see — especially when this isn’t really the kind of increased government accountability that his supporters might expect.

This is an unfortunate but excellent point. The Real Clear Politics average has Paul at just 2.6% in the polls. Carly Fiorina overcame a similar spread within the field (she’s now hanging on to a respectable 8.9%,) and her rise also included a peek into her personal space. However, Fiorina’s success came after a series of breakthrough debate performances; Paul has yet to truly surpass himself under that particularly bright spotlight.

Rand Paul’s exposure will surpass Fiorina’s, and the payoff will be great—if Rand (not “the Candidate” or “Dr. Paul”) can pull it off.

Meh. He lost most of the solid base his father had, and there just aren’t that many other GOP voters who will tolerate his isolationist foreign policy.

Ron had a coalition of dedicated followers which included students, Randians (Ayn, not Sonny), and a selection of preppers/doomsday cultists/white supremacists who gave him a dependable 10% or more in nearly every GOP primary. They’ve all deserted Rand.

Trump has pretty much locked down the anti-vaccination, chemtrails vote as well. Not sure who else of his dad’s supporters are still there for poor young Rand.

He’s living in a dream world. He has a prickly personality; negative comments about Cruz just make him look small and jealous; and he’s good friends with McConnell.

So… We all now know who Amy Miller is backing, sweaty palms and all.

Sorry Amy, but Rand Paul is not going to be president, ever.

The biggest problem with our country right now is most people do not want Liberty. They want cradle to grave ‘caring’. I fear that Dr. Paul’s message will go unheeded as we slide into Socialist hell.

I’ve been reading comments about Rand Paul on different sites and there’s a lot of criticism by libertarians who feel that he has lost his way. Evidently, he is not following in his father’s footsteps to their liking.

He does seem to be having a hard time getting focused and/or making an impact. Well, there’s other candidates that may be just as good or better. I just hope whomever is the next leader really is one, in the best sense of the word.

“…but it’s also something new and different and buzzworthy. I’ve written before that I believe great value lies with innovation in electoral politics, and this innovates on a personal level that most candidates wouldn’t even consider reaching for.”

This is glorifying medium over message, newness over substance. It’s hopelessly shallow – and illustrative.

I struggle with this notion that innovation is something one believes in – or doesn’t believe in, I suppose? Are there many who don’t believe in innovation, in practically anything?

If Rand Paul were to promise to be a low-key President, i.e. deliver the State of the Union as a letter to Congress (and the nation), it would go a long way to reviving his candidacy.

The answer is simple – his Senate re-election campaign. Look for him in out of the way hoot-n-holler hamlets in Kentucky where he will be wooing the Appalachia vote.

Rand Paul’s most frequent question: are you still running for President?

So much for an all day Rand-athon. Yeesh