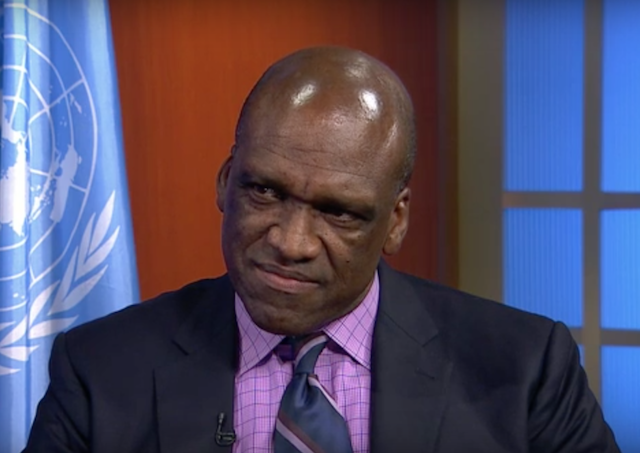 In exchange for the money, federal prosecutors say Ashe used his position as Permanent Resident to the United Nations for Antigua and Barbuda and General Assembly head to introduce a U.N. document in support of a real estate project being developed by Chinese billionaire Ng Lap Seng.

Prosecutors say some of the bribe money was used to pay for Ashe’s family vacation and to construct a basketball court at his home in Dobbs Ferry, N.Y. He opened two bank accounts to receive the funds and then underreported his income by more than $1.2 million, officials said.

“There is a lot more work to do,” Preet Bharara, the U.S. Attorney for the Southern District of New York, told reporters on Tuesday when asked about the probe. He said more charges were possible, adding, “We will be asking the question: Is bribery business as usual at the U.N.?”

Ashe was arrested today; Ng was already being held, and five others have also been arrested in connection with the scheme. At least one other diplomat, Francis Lorenzo of the Dominican Republic, is also being held, along with two naturalized citizens who were living in China and who officials suspect were helping push the deals through.

This isn’t the first time the United Nations has had to deal with an embarrassing pay-for-play scandal:

The case could also prove highly embarrassing to the United Nations, which has vowed to act with greater transparency and accountability after past scandals. Just a decade ago, the United Nations was rocked by the details of an independent commission that found widespread abuse of its oil-for-food program in Iraq, turning one of its biggest humanitarian efforts into one of its biggest scandals.

Secretary General Ban Ki-moon said through his spokesman that he was “shocked and deeply saddened” at the accusations of corruption.

“They go to the heart of the integrity of the legislative process of the United Nations,” the spokesman, Stéphane Dujarric, said on Tuesday.

The investigation is continuing, and prosecutors have said that more arrests are “likely.”

Bonus: in an interview from 2013, right after his appointment, Ashe talked up his goals for his tenure—and at around the 8 minute mark, executed a 100-yard punt on Syria:

He didn’t do anything that Hillary didn’t do.

He just got caught.

“The United States Department of Just Us.”

I remember as kid in the 60’s seeing billboards with a “Get the U.S. out of the U.N.
Should have listened back then.

Ah, it may be business at the UN, but the US doesn’t do bribes.

Yes it’s time to arrest the other members of the UN leadership.

That the U.N. Secretary General is worth so much less than the U.S. Secretary of State, or that the he was arrested for this?

What the $%!#( has this got to do with the secretary general?

I believe it’s a sarcastic observation that our former Secretary of State received hundreds of millions in payments from foreign entities, albeit through her ‘charitable foundation’ which spends less than 15% of it’s income on actual charity. You gotta hand it to the old hag, she doesn’t just say “fuck you” to the law, she says “fuck you” and does things expressly forbidden in The Constitution.

And I repeat, what the &*() does this have to do with the Secretary General?

Does the Pope shit in the woods?

1.3 million is barely pocket money for the call-in girls at the UN. This guy is worst bribe taker in UN history. Kofi Annan and his son proudly gloated how they ripped off the so called oil for food program of hundreds of millions of dollars.

But don’t worry the business of attacking Jews at the UN will continue unabated.

This might be another shot across the bow from Obama to Hillary, telling her to step down from the race. The Chinese guy indicted in this mess is a long-time Clinton pal and fundraiser. I wonder if this is another string that, when pulled, will reveal more Clinton skeletons?

Get America out of the UN and the UN out of America!

The headline should have read, “Is Bribery, Rape, Spreading Disease, Corruption, and Nepotism the UN Standard.”

Oh dear another Clintoon disciple goes down the tubes. Wonder how much time he will get, if any? Will he turn on the Hildabeast or will he get Vince Fostered? These are all excellent questions.

Clinton disciple? What are you talking about?