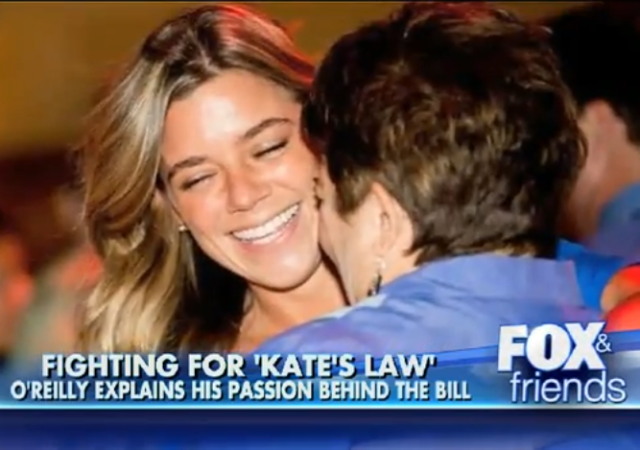 Last week, Democrats blocked the passage of Kate’s Law, a measure which would punish illegal immigrants who repeatedly re-enter the country after deportation.

Bill O’Reilly of FOX News has been one of the most vocal proponents of the law and spoke to FOX and Friends about what happened in Congress.

O’Reilly to Dems Against Kate’s Law: ‘How Can You Live with Yourself?’

Bill O’Reilly said a stand-alone vote on Kate’s Law would put lawmakers to the test and — in his opinion — disqualify any Democratic senators who oppose it from holding office.

The proposal would impose a mandatory five-year prison sentence on felons caught trying to re-enter the U.S. after being deported.

Sen. Ted Cruz (R-Tex.) re-introduced a stand-alone version after Democrats voted down a bill to defund sanctuary cities that included the provision.

It’s named for 32-year-old Kathryn Steinle, who was fatally shot in San Francisco in July by a repeat felony offender who re-entered the country illegally from Mexico.

O’Reilly told “Fox and Friends Weekend”‘s Anna Kooiman that he hopes the measure gets to the floor quickly.

“Who would oppose that really? Who on earth would oppose that law? And yet, you have, I guess, a number of Democratic senators who are going to vote against it. If they do, that, to me, disqualifies them from holding office.”

Here’s the video of O’Reilly’s remarks:

As Bill O’Reilly mentioned in the video, Ted Cruz is going to introduce it as a stand alone bill.

Curt Mills of the Washington Examiner:

Sen. Ted Cruz is trying for the second time this month to move a “Kate’s law” bill, after the Senate failed to impose tougher penalties on illegal immigrants who re-enter the U.S. after being deported.

The Texas Republican’s new bill introduced Wednesday would impose a five-year minimum sentence on any illegal immigrant who re-enters the country. It’s a response to the murder of Kate Steinle in San Francisco at the hands of an illegal immigrant.

Cruz’s second attempt comes after Senate Democrats prevented a broader bill to move ahead in the Senate this week. That bill included Kate’s Law, but was also aimed at cracking down on “sanctuary cities” that ignore federal immigration law.

“Do you ever get the sense that Democrats care more about the rights of illegal immigrants than the rights of American citizens?”

They do not care about either. They only care about power and money for the ruling class.

“The proposal would impose a mandatory five-year prison sentence on felons caught trying to re-enter the U.S. after being deported.”

My proposal is that they be imprisoned for life under those circumstances.

Experience proves they’ll just keep coming back, because the gradient here is so favorable for them.

This is perfectly fair, too, because they would be on notice. If they show up again, they’ve shown their (prison) stripes (see what I did there?).

And it would work.

I propose we shoot them at the border. No more offenses, no paying to feed, clothe and house them for life, and dramatically fewer people trying to get across the border.

Seems that an alternative needs to be explored here. Rent mexican jail space for these criminals. It would seem to be a win/win solution, as it would be less expensive than housing them here, and even if they escape, they’re still in Mexico.

“Do you ever get the sense that Democrats care more about the rights of illegal immigrants than the rights of American citizens?”

That’s just the result of what they care about – creating new Dem voters. If Americans’ rights are subsumed in the process and American people are killed in the process, well… you gotta break some eggs to fake an omelette.

you gotta break some eggs to fake an omelette

Imagine that the person that was shot was an illegal alien. What would the DemocRATs do? They would be on the stump calling for more gun control and ginning up the hordes to march for a new cause. ”Latino Lives Matter“

It would be on for one and all, at least those on the Left: “Racist bitter-clingers committing wanton hate-crimes against innocent immigrants!”

If Mexico keeps exporting poor Indios and Central Americans to us, I propose we shut down their commercial exports at the border. I live in San Diego. I know it will be hard on those businesses that sent their business south to save money. My heart bleeds

The Dems will have another opportunity to vote this down. In public. This is like partial birth abortion: even many Democrats in the electorate have a problem with it. Good move my Cruz.

And it’s not like Democrats haven’t had fair warning on allowing dangerous illegals into the country. Any of us old-timers remember Carter’s Mariel Boat Lift and the Marielitos (gangsters)?

“The exodus started to have negative political implications for U.S. president Jimmy Carter when it was discovered that a number of the refugees had been released from Cuban jails and mental health facilities. The Mariel boatlift was ended by mutual agreement between the two governments involved in October 1980. By that point, as many as 125,000 Cubans had made the journey to Florida.”

We lived in Florida during that time. Mentioning it around my late father made his face turn purple. What a mess.

I’ve said it before and I’ll say it again.
The dems are the party of the criminals. “Free the criminals, kill the police” should be their motto.

Roger that. Look at the demographics of the party. All Democrats aren’t criminals, but most criminals are Democrats or democrat strap hangers.