Cruz Warns America is “One Liberal Justice Away From Irreparable Damage”

Cruz Warns America is “One Liberal Justice Away From Irreparable Damage”

“The stakes of this election are high” 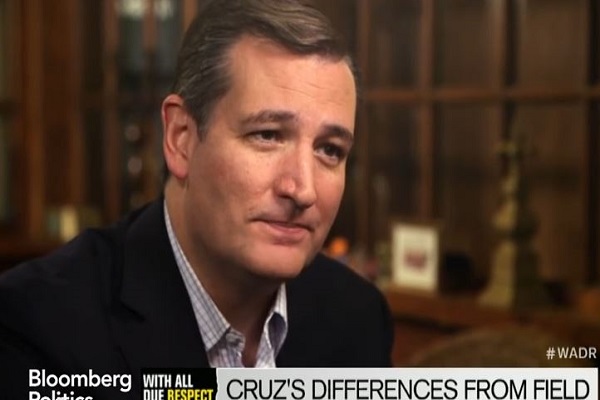 Ted Cruz has hit third place (behind Carson and Trump) and double-digits in Iowa.  He’s taken over Rubio’s third place spot according to Bloomberg.

Texas Senator Ted Cruz, at 10 percent, is the only other candidate [besides Carson and Trump] in double digits. He’s followed by Florida Senator Marco Rubio at 9 percent. The horse-race numbers for the top four mirror a Quinnipiac University poll released Thursday, with the main exception being that the earlier poll had Rubio in third place with 13 percent.

As he continues to campaign in Iowa, Cruz emphasizes the import of the 2016 presidential election.  He tweets:

The high stakes to which he refers are those of the makeup of the Supreme Court.  Cruz told the Des Moines Register that we are one liberal Supreme Court justice away from “irreparable damage.”  The Register reports:

The U.S. is “one justice away” from a liberal Supreme Court causing enough damage for the nation to become unrecognizable, Texas Republican Ted Cruz said Friday.

In a Friday interview with With All Due Respect, Cruz points out differences between himself and the other GOP candidates.

One of the points that Cruz also makes in this video is how well his campaign is doing financially.  Part of this financial success is due to his campaign’s unique crowdfunding program.  Touted as the “world’s first presidential crowdfunding platform,” CruzCrowd focuses on small, grassroots donors and building a “militia” across the nation of supporters who can participate in his campaign by helping with fundraising efforts at the local level.

Dubbed CruzCrowd, the web-based system is effectively a mash-up of the two main drivers of political fundraising: small online giving and the bundling of large contributions. Supporters who sign up to be part of “the militia” will begin earning American Revolution-themed badges as they recruit new “patriots.” There is no minimum donation to participate.

“The idea is that it shouldn’t just be millionaires who bundle donations,” said Chris Wilson, director of research and analytics for the Cruz campaign.

As with high-dollar bundlers, CruzCrowd participants have the chance to climb tiers based on their fundraising totals. Everyone who signs up starts as a Colonist, then reaches Delegate after raising $1,000 and Signer after raising $5,000. The top tier, Federalist, requires collecting $10,000.

As participants expand their fundraising networks, they will compete for perks such as riding on the campaign bus with Cruz and flying on his campaign plane.

With innovative ideas like this, the Cruz campaign is organizing a grassroots network that seems to be effective in terms of his  fundraising, and with Cruz emphasizing the importance of the 2016 election in terms of the Supreme Court and other high stakes issues like ObamaCare, the IRS, Common Core, and Obama’s disastrous Iran deal, he seems likely to continue gaining momentum.

I liked how Cruz presented himself in that interview. Wouldn’t it be great to vote for this guy in the general election? Against Hillary.

No one could ever say that the candidates were the same.

“Supporters who sign up to be part of “the militia” will begin earning American Revolution-themed badges as they recruit new “patriots.”

The left will go apeshit over this, calling it violent militarism, and will look for murders to blame Cruz for, lol.

At present, Cruz tops my short list, though I’m hoping for a Draft Ted Nugent movement.

Maybe he can “draft” Nugent as VP…

Double Ted! I like it. Nugent’s another Motown boy, BTW. As VP, Nugent would have time to reunite the Amboy Dukes.

I think Nugent would reflexively resist the draft…

Well, not the beer.

He’d resist the draft and draft beer (he doesn’t drink or do drugs).

The left will go apeshit over this, calling it violent militarism

Good. That’s a point for him. I’m still not convinced by the Cruz hype, and still think that instead of running for president he should stay in the senate for about another 10 years and then move to the supreme court, but now that Walker and Perry are out, and Jindal seems on the way out, I don’t know whom else to support. I do like Jeb, and could have supported him in 2012, but he’s gone out of his way to drive people like me away.

“I do like Jeb, and could have supported him in 2012, but he’s gone out of his way to drive people like me away…”

Because based on the way he governed Florida he’d be likely to do a good job in the White House. That as a political tactic he’s decided to antagonize me and my kind doesn’t change that.

I was impressed with him the very first time I heard him speak. As a matter of fact, I was introduced to him on this site when Professor Jacobson had a vid of him. I predicted to my kids that he would one day run for president. I’m glad I was right.

This is a reformer. A Conservative reformer.

And I am still grateful that justice was not appointed by McCain or Romney.

Had they done so, they’d probably have appointed the likes of John Roberts.

Yeah, thank goodness we got real, through-and-through leftists instead of people who would sometimes but not always disappoint us.

In other words, you’re grateful that Elena Kagan and Sonia Sotomayor are now on the Supreme Court.

Both my husband and I will be voting for Ted Cruz.

Milhouse no longer likes Yeb!? The Apocalypse is coming!

WTH are you talking about? 1) When did I ever support him? 2) Where did you get the idea that I like him less than I ever have?

I don’t like Senator Cruz, although I agree completely with his politics. IMO he’s smarmy and a bomb throwing, divisive insider playing outsider. Every time he speaks I think smarmy Pentecostal preacher (versus sincere, honest Pentecostal preachers- I’ve known both). Maybe he’s trying too hard to be THE conservative in the room but the constant self aggrandizing is irritating and off putting to put it mildly. Leaders should have more than minions. They should have loyal allies as well as soldiers. Cruz alienates the very ones he should be acknowledging agreement with.

Are you saying you won’t vote for a candidate whose politics you agree with 100% because you don’t care for his personality? What, are you planning to eat dinner with him? Marry him? Yikes.

So what if she doesn’t care for his style of speaking?

Really, Henry, so what?

It’s her views & she is entitled to them.

All the crap that has been thrown at We The People over the past 6 years has passed the court by 5-4. We’re already over that brink that he is warning about.

I like seeing the variety of views being expressed here on this post sans outright attacks from the usual snarling suspects to silence them.

It gives insight to differing POVs.

Cruz is unappologitically Conservative and a blue ribbon statesman with an impeccable high octane ivy league education. His IQ is superior to all Democrat contenders and equal or better to each of the first tier GOP competitors.

His reason to run is a selfless effort to bring the USA back from the Socialist brink.

Liberal media has played a remarkable role in demonizing him along with help from RINOs like Rep King (R-NY) and the RINO media like Fox News.

This blog gave unflinching support to elect Cruz to the US Senate.

There are numerous undeniable indications that Cruz & Trump have an early primary alliance between themselves… That whoever lags the other going into the final Primary showdown, will endorse the other to gift their supporters to the top dog.

Carson is a wildcard, in my view. He is leading in Iowa and in a new national poll just put out by New York Times/CBS. That poll’s legitimacy will be tested by other polls coming in the days to follow.

Carson, like Fiorina, is spiking upward, and like Fiorina, will now be the center of GOP dirt digging into his past statements and stances.

Abortion stance flip-flops will be one of the early subjects.

Carson is also hated by the Left like no other GOP contender b/c Black Conservative. They will unload on him now.

There are indicators of the Left’s sinster hatred: death threats rising to the point of the Secret Service being assigned to protect him. Same for Trump but not because his is black like Carson.

I honestly believe the Left will assassinate Carson if he gets to the top and can’t be dislodged any other way.