“The American public wants to see a change” 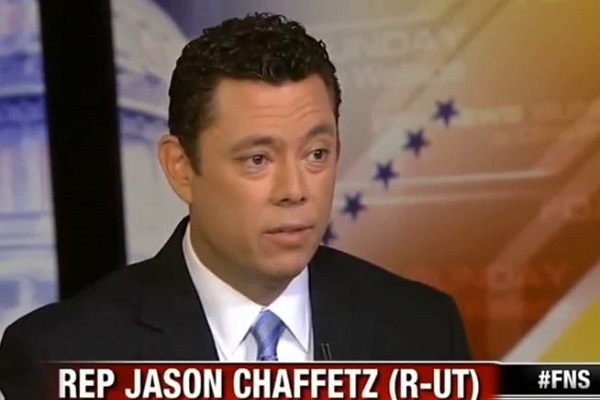 Jason Chaffetz, Chairman of the House Oversight Committee and current target of a Secret Service smear campaign, has announced that he will be challenging Kevin McCarthy for the House Speakership.

Chaffetz says McCarthy lacks the support to become speaker following a gaffe in which McCarthy suggested the purpose of the House’s Benghazi committee is to drive down Hillary Rodham Clinton’s poll numbers.

Chaffetz has a point and is seizing on the momentum that conservatives in the House feel at this time.  While some of his support among conservatives waned following his role in GOP retribution against more conservative members (a decision he later rescinded) and his tentative support for “earned citizenship” (after running for his seat primarily based on staunch opposition to any form of amnesty), Chaffetz is still seen as less “establishment” than McCarthy and therefore feels that he is in a good position to affect change in the House.

Appearing on Fox News Sunday this morning, Chaffetz makes this case and asserts that McCarthy should “not get an automatic promotion.”  Watch:

Commenting on the above appearance, The Salt Lake Tribune reports:

Fox News commentator Brit Hume noted after Chaffetz’s appearance, that if it wasn’t the Utah congressman who jumped in the race, it would have been someone else. McCarthy’s Benghazi comment was “very damaging” and gave Clinton ammunition against the GOP.

“People on the right don’t want” McCarthy, Hume said. “He can’t win. We’re a long way from having this settled.”

On Sunday, Chaffetz sent his GOP colleagues a letter asking for their support, noting that many Republicans “have indicated they cannot or will not vote for a current member of our leadership team to be the speaker.”

“I am confident I can bridge this divide and work effectively together with all members of our conference,” Chaffetz wrote.

Democrats say they are cautiously optimistic that Chaffetz will be a better chairman than Issa. “I am encouraged that Rep. Chaffetz has shown a sincere interest in working together and focusing on reform, and I hope this bipartisanship continues,” Cummings said in a statement on Tuesday. Whether by design or happenstance, Chaffetz’s current focus in on the breaches at the Secret Service, a scandal less fraught with partisan underpinnings than many of the committee’s other inquiries.

Yet Democrats aren’t exactly getting their hopes up, and with good reason. Though he worked for Michael Dukakis’s presidential campaign while in college at BYU (there was a family connection), Chaffetz is a committed and ambitious conservative who represents one of the most Republican districts in the country. As a top early backer of Mitt Romney, he has long been a staunch Obama critic, and after a decisive Republican win on Election Day, the appetite among House conservatives for taking on the administration is as strong as ever.

This goodwill among House members on both sides of the aisle may serve him well in what is seen as a long-shot bid for the House speakership against McCarthy.

Interesting. Sounds just like what the Republicans need in the House, therefore I expect the Dems and the GOP establishment to spare no effort into smearing his name right down into the gutter.

and working well with … Democrats

The Republican Party was formed specifically to fight the disgusting policies of the Democrats. That was its sole reason for existence, and—since we still have Democrats and their policies are still disgusting—it still is.

In the Senate they put on a big—albeit smarmy and unconvincing—show of collegiality. But they’re not burdened with that rubbish in the House. So fight for what’s worth fighting for, or stay home.

and working well with … Democrats

Those Democrats are the elected representatives of their American constituents, and they deserve respect, as such.

It’s fine, and productive, to argue that the Republicans have the better policies on many, many issues. It’s is even better to notice where broad swaths of nominal Democratic and Republican voters agree. Best of all is to propose workable legislation that embodies those better policies, and demonstrate how that legislation promotes the best interests of Americans by capturing the areas where nominal voters from both parties agree.

Excellent observation, but lost upon the mob of angry peasants with their pitchforks and torches. Since Pat Buchanan, they have actually begun to take pride in their own ignorance even as they demand ever-more-stringent purity from those on our side whom they mistrust (although full amnesty from adherence to principle is granted to whoever is their Flavor of the Month in their never-ending crusade to return the GOP to permanent minority status).

“Waste not your breath upon a fool, for he will not hear the wisdom of your words.”

Angry peasants? You mean like bitter clingers? How Obaman. How Bushian.

““Waste not your breath upon a fool, for he will not hear the wisdom of your words.”

You don’t do well with irony, do you? What a small man you are.

Estragon is a democrat masquerading as a “moderate” republican. That’s been clear for a long time.

Bugger off. I worked with Kemp before Reagan, and had been campaigning for conservatives for a decade already then. I don’t give a rat’s patootie what you think.

Touchy touchy. So the churls disagree with you? No need to get so defensive.

“and had been campaigning for conservatives for a decade already then.”

You confuse conservative and republican.

“I don’t give a rat’s patootie what you think.”

Ouch! That really hurts.
Keep pushing the big donor class and we’ll keep calling you out.

Oh great superior exemplar of the Dunning-Kruger effect, we churls and peasants acknowledge your sneering disdain. You just can’t keep it in can you? It just pops out at any irritation at the serfs. Members or your assumed class are supposed to have more self control.

Except it’s a one way street. The ratchet always turns to the left. Never the right and the most they do is slow the decline. The party elites are more like each other than their own constituencies that’s why they collude to lie, cheat and steal from us.

If we follow the RNC and the rest of the party elite we’ll get where the DNC is leading just slower.

The political parties are too strong, probably because campaign finance “reform” has made candidates in competitive races dependent on money from the parties.