You have trained your entire lives for this 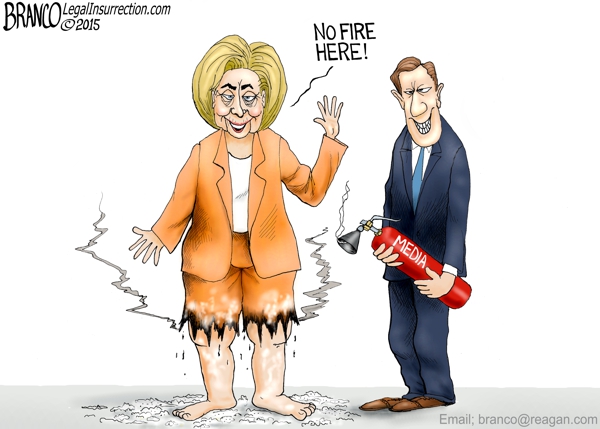 But that’s far enough on the nakedness, Branco. I hope your predilection for drawing Obo the Clown without clothes doesn’t carry over to Shrillary.

If we had a Joe McCarthy, the media would be investigated for unAmerican activities..

Nice touch using one of her famous pant suits.

But, I would have had the man holding the fire extinguisher also holding out a crown to give her.

She lies about everything and doesn’t worry about getting caught.

Former Hewlett-Packard Co. chief executive Carly Fiorina, at 5-foot-6, is taller than the average height for American women, which is 5-foot-4. Hillary Clinton also is, though her height is a matter of dispute. In the 2008 campaign, she was widely reported at 5-foot-5. Now, many news reports put the former senator and secretary of state at 5-foot-7. Her campaign didn’t respond to questions about the gap.

You could have shown feet of clay. Just sayin’.

I mean there’s really nothing else to say…

“As Hillary Clinton came under increasing scrutiny for her story about facing sniper fire in Bosnia, one question that arose was whether she has engaged in a pattern of lying.

The now-retired general counsel and chief of staff of the House Judiciary Committee, who supervised Hillary when she worked on the Watergate investigation, says Hillary’s history of lies and unethical behavior goes back farther – and goes much deeper – than anyone realizes.

Jerry Zeifman, a lifelong Democrat, supervised the work of 27-year-old Hillary Rodham on the committee. Hillary got a job working on the investigation at the behest of her former law professor, Burke Marshall, who was also Sen. Ted Kennedy’s chief counsel in the Chappaquiddick affair. When the investigation was over, Zeifman fired Hillary from the committee staff and refused to give her a letter of recommendation – one of only three people who earned that dubious distinction in Zeifman’s 17-year career.

How could a 27-year-old House staff member do all that? She couldn’t do it by herself, but Zeifman said she was one of several individuals – including Marshall, special counsel John Doar and senior associate special counsel (and future Clinton White House Counsel) Bernard Nussbaum – who engaged in a seemingly implausible scheme to deny Richard Nixon the right to counsel during the investigatio

Why would they want to do that? Because, according to Zeifman, they feared putting Watergate break-in mastermind E. Howard Hunt on the stand to be cross-examined by counsel to the president. Hunt, Zeifman said, had the goods on nefarious activities in the Kennedy Administration that would have made Watergate look like a day at the beach – including Kennedy’s purported complicity in the attempted assassination of Fidel Castro.

The actions of Hillary and her cohorts went directly against the judgment of top Democrats, up to and including then-House Majority Leader Tip O’Neill, that Nixon clearly had the right to counsel. Zeifman says that Hillary, along with Marshall, Nussbaum and Doar, was determined to gain enough votes on the Judiciary Committee to change House rules and deny counsel to Nixon. And in order to pull this off, Zeifman says Hillary wrote a fraudulent legal brief, and confiscated public documents to hide her deception.”
http://www.caintv.com/watergate-era-judiciary-chief

How come the investigation made her some kind of hero, instead of the Liar that the Media tried to ” Whitewash,” over ? We already know that she is a well known liar and that old friends of she & Bill had mysterious deaths. ( 126 ) Is this who the ” Old Time,” Democrats want for their President ?