A new Pew poll dropped on Friday and told us what we already know about this election cycle: American voters are ready for something different.

We could have told you that months ago, citing the popularity of candidates like Donald Trump, Ben Carson, and Carly Fiorina as a prime example of been-there-done-that fatigue. The latest polling data (1,502 adults were surveyed, including 1,136 registered voters) serves to validate those candidates’ rising stars

Since March, the share of all registered voters who say it is more important for a presidential candidate to have “new ideas and a different approach” has surged – with virtually all of the increase coming among Republican and Republican-leaning voters. Today, by more than two-to-one (65% to 29%), Republican and Republican-leaning registered voters say it is more important that a candidate have new ideas than “experience and a proven record.” Just five months ago, GOP voters valued experience and a proven record over new ideas, 57% to 36%.

Opinion among Democratic voters continues to be more evenly divided: 50% say it is more important for a candidate to have experience and a proven record, while 42% view new ideas and a different approach as more important. This is little changed from March (46% experience, 49% new ideas). 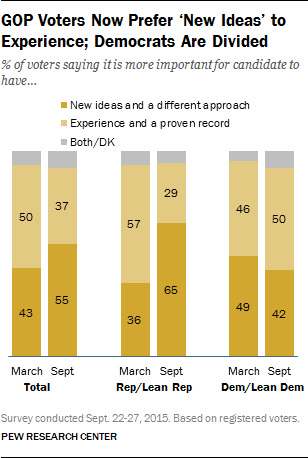 Voters may want “new ideas,” but the want their eventual nominee to apply those ideas to the same issues that have dominated the past few election cycles. According to Pew, voters want to hear more about the economy, health care, and terrorism, and less about issues like the environment and abortion: 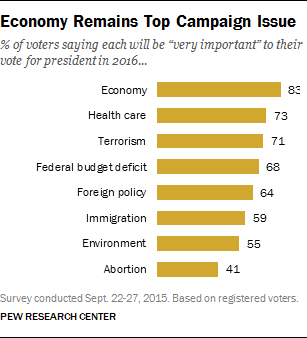 Keep in mind that Pew didn’t survey GOP primary voters or grassroots activists—just registered voters. There’s a big difference between these two groups of voters, and it’s important to remember that as you see campaigns deploy various narratives and messaging strategies. Abortion and immigration, for example, are important issues, but they don’t dominate with the electorate at large. (Case in point: even among GOP primary voters, polls show that group is divided 43% more likely/29% less likely to vote for a candidate who pledges to deport all illegal immigrants.)

Speaking of candidates: the field may be divided, and fiercely contested, but overall, GOP voters are more satisfied and more engaged with this slate than they have been with at least the previous two crops of presidential candidates. 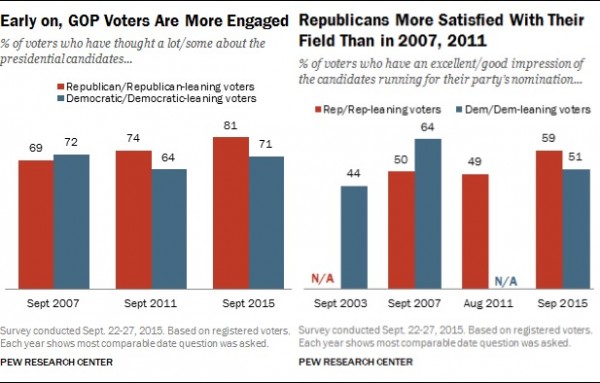 The survey finds that Republican voters continue to give their field of presidential candidates higher ratings than at comparable points during the last two presidential campaigns. Meanwhile, Democratic voters are less positive about their party’s field than at about the same point in 2007, the last election in which the party had a contested nomination.

Moral of the story? Voters are paying attention, and they’re probably paying more attention than we originally thought.

Pew also discovered that Republicans are divided over Planned Parenthood funding, Democrats are divided over the Iran deal, and the majority of members of both parties prioritize supporting the candidate who most closely aligns with their views.

Here’s the state of the field: 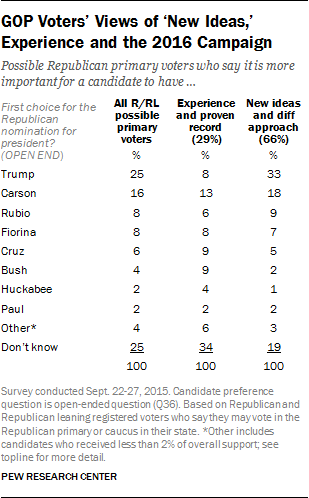 Overall, voters want a candidate they can share opinions with; “electability” isn’t a major concern:

Few Republican and Democratic registered voters say a candidates’ electability is more important than shared issue positions in deciding who to support in next year’s primary elections and caucuses.

About two thirds of Republicans and Republican-leaning independents (67%) and a similar share of Democrats and Democratic-leaning independents (65%) say it is more important that a primary candidate share their positions on the issues than be able to beat the other party’s nominee. This is similar to opinion in the fall of 2007, when most potential voters in both parties had a similar desire to support the candidate who shared their issue positions in the 2008 primaries.

Fiorina a “rising star”? After a month of constant hype and poppycock, she is still in single digits, and within margin of error of Ted Cruz who is daily and courageously taking on the Republican Establishment.

She’s got less than a third the support of Trump, half that of Carson, yet you reach down into the murky single digit depths and pluck her out and fluff her up and try to pass her off as “non-traditional” as an explanation.

That’s silly unless your playing “One of these three does not fit”.

Fiorina is vying for a VP spot and being a last ditch GOPe candidate if all else, like JEB!, fails. I like Cruz but I can rationalize him being better in SCOTUS. I’ll take Trump, warts and all. He can’t be a bigger shill and liar than our half-white, pro-muslim, anti-gunner in chief. Because Hillary? Biden? Witless commie Sanders?

The GOPe and the state controlled media is not going to like that poll. They did not want anyone that came from the outside or any TEA party affiliated conservative candidate. They want someone like Jeb so they can continue to feed their crony corporate masters all of the money they need.

Since most of their experience is expanding government it’s not too surprising that voters are rejecting them.

Pew’s reputation is as one of the more Democratic leaning organizations, and their polling methods tend to skew left of others’ results. How dispositive their information should be given their sample of Republican-leaning voters is actually rather low, or their general intent in affecting political outcomes, is debatable at best.

In sum: if the GOP should self-destruct and the Democrat be elected next year, they would be toasting champagne at Pew. Use your own judgement, if any.

“Experience.” THAT is a laugh. What ‘experience?’ — at failure?

What’s wrong with classic ideas that would work just fine if only someone was given a chance to implement them?

You mean, the idea of classic failure?

These GOP idiots are like Hillary Clinton: they’re stuck in another time, and have no sense of the disaster they’ve created for the rest of us.

Like it or not, guys like Donald Trump – and their understanding of the pathetic national culture and the Obama presidency that the likes of the left created and ‘GOP consultants’ enabled — are the new hope.

There is nothing ‘classic’ anywhere in our government, other than the Constitution and the Bill of Rights. Those two are fine champagne. The corrupt morons we’ve hired to protect them are cheap, nauseating bottles of wine that need to be dumped down the toilet.